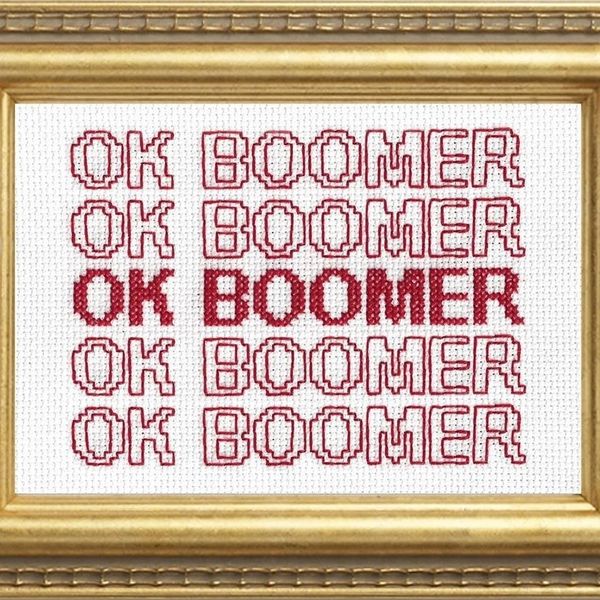 From taking over TikTok to fueling sternly worded emails from HR, it's been hard to escape the deluge of "OK Boomer" content flooding the internet. Coined as a succinct clap back to out-of-touch Baby Boomers who seem to be obsessed with blaming Millennials and Gen Z for the death of every industry, the viral phrase has become both a rally cry for a disenfranchised younger generation and a self-fulfilling prophecy for Boomers.

Related | The Internet Eviscerates the Argument That 'Boomer' Is a 'Slur'

After having laughably failed to equate "OK Boomer" with the n-word, it looks like embittered olds are changing tactics and looking to now cash in on the meme's success. According to CNN, Fox Media filed an application to trademark "OK Boomer" with plans for a reality TV show apparently in the works. Because, in classic Boomer fashion, if you can't beat 'em, run the joke into the ground until it ceases to be funny.

Trademark Lawyer Josh Greben, who posted a screenshot of the application on Twitter, was the first to point out the new development. Submitted on November 11, the filings look to trademark "OK Boomer" as the name of a new potential comedy, reality, and/or game show that would air on Fox. (Think The Masked Singer-meets-Are You Smarter Than A 5th Grader-meets-Jackass hosted by Steve Harvey and Casey Frey.)

But before you get too worked up, odds are you won't have to pony up any royalties up Fox any time soon. According to Greben, "The USPTO will deny all of these applications because OK Boomer has become a 'widely used message.'" Fox may not be the only corporation trying to hone in on the "OK Boomer" boom, but they are by far the biggest to date. As we've previously seen with "Hot Girl Summer" and "rise and shine," it is incredibly hard to lay claim to a meme, let alone cash in.

"A trademark registration will not issue in a phrase that is commonly used to convey a social or political message," Greben further elaborates. "This is because such a 'viral' phrase is incapable of identifying the source of a product or service – which is what trademarks must do to be capable of registration."