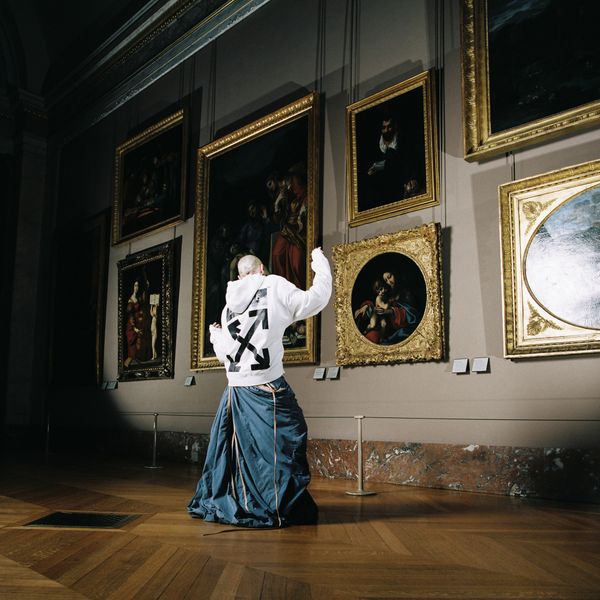 When it comes to the number of fashion collaborations, Off-White is at the top of the pack. The streetwear juggernaut, helmed by Virgil Abloh, has just announced yet another capsule with a new partner, although this one shouldn't come as a surprise to his fanbase. (Abloh has long expressed his love of art and architecture.)

The famed Louvre in Paris, the world's most visited museum known for its large pyramid entrance, teamed up with Abloh to create a collection of ready-to-wear inspired by its Leonardo da Vinci exhibit, which runs until February 24, 2020. The capsule comes as the museum celebrates the 500th anniversary of the Renaissance artist's death.

"I want to crash together these two worlds that are seemingly different: fashion and high art," Abloh said in a statement. "It's a crucial part of my overall body of work to prove that any place, no matter how exclusive it seems, is accessible to everyone. That you can be interested in expressing yourself through more than one practice and that creativity does not have to be tied to just one discipline. I think that Leonardo da Vinci was maybe the first artist to live by that principle, and I am trying to as well."

Unfortunately, no Mona Lisa imagery is featured in the collection. However, da Vinci's other famous works including Virgin of the Rocks and Saint Anne are woven with the some of his iconic drawings throughout, such as the anatomical sketches of the male form. Off-White logos and arrows are also interspersed in the collection of tees and hoodies.

The collection is available now via the Louvre gift shop and at Off---White.com, and is priced between $355-640.