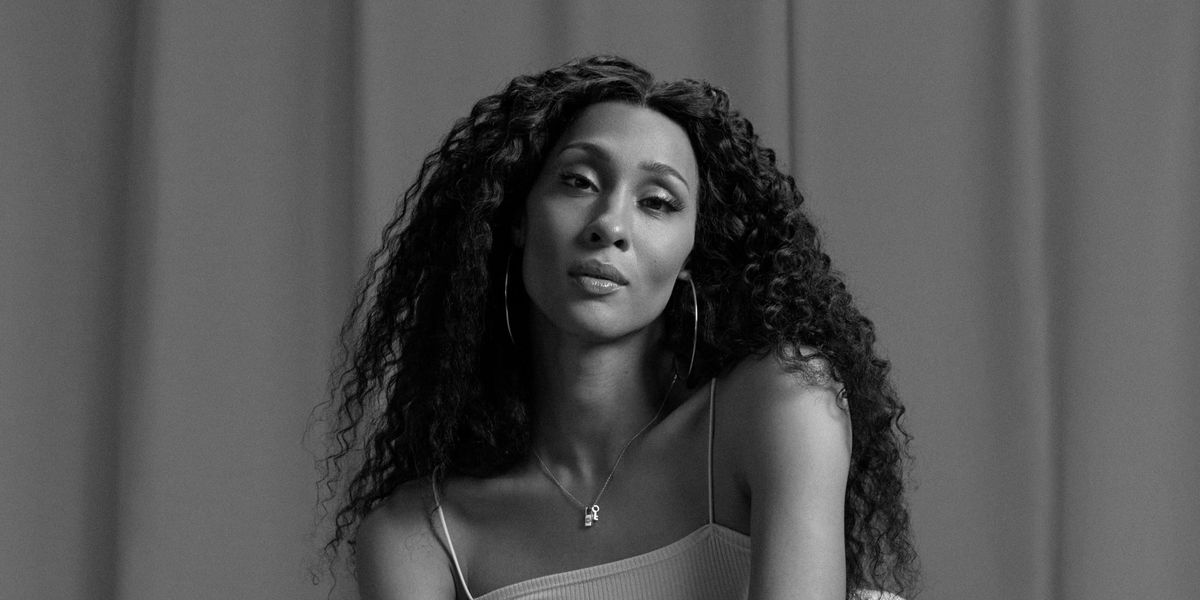 Mj Rodriguez Is the Heart of This Year's Pride

She is Michaela Jaé Rodriguez, and she has something to say.

Although the Pose frontwoman and celebrated meme legend has been preparing for her new chapter, she didn't exactly find the words at first. After dropping everything when COVID-19 first hit New York City, the 30-year-old actress used lockdown to hold a personal introspective of her performance as Blanca Evangelista since 2018.

"I just bawled and cried," she tells PAPER. "When I did that for myself, It made me realize that I was doing that for a lot of other people around the world too."

Since joining the historic show as its main lead, Rodriguez's life has been a rollercoaster of opportunities presented to her, with the actress choosing projects that center powerful women of the trans experience. There hasn't been a day where she doesn't think about the emotional weight of the platform she's been given and the responsibility to use it correctly.

As such, Rodriguez, along with other LGBTQ activists, are going "beyond the rainbow" in a new Pride campaign with retailer H&M. The partnership aims to connect the queer community by sharing stories about what it means to live your authentic life — something Rodriguez says is more important than ever.

"Little young trans girls and trans boys, and even the little cis boys and cis girls, are looking to us now, too," Rodriguez says. "That's so beautifully profound."

As one door closes, another opens. While Rodriguez says goodbye to her on-screen family, she's preparing for a new chapter, one that's filled with championing intersectional visibility and musical bops. Her first single, "Something To Say," premieres this Friday – a lifelong dream finally realized. She's at peace and we can't help but be too.

PAPER caught up with Rodriguez ahead of Pride to discuss the future of her career post-pandemic and what life will be like after Pose.

Pride is so many things to so many different people — especially now, as we've seen more strides towards inclusivity and being aware of our privilege in the world. For you, what does pride mean today?

Pride today means living out loud. Understanding your existence and knowing that it's worth it. Knowing that your presence on earth is needed, and standing out is not a bad thing, it's the easiest thing you could ever do to really liberate yourself and feel free. Pride also means allyship.

There's such a big shift in how these large corporations and brands act as allies. The commercialization of rainbows and glitter to celebrate Pride once a year is something some queer activists have taken problems with the last few years, citing concerns regarding tokenization of Black and Brown voices. Do you think there's any room for change within the structure of how we celebrate alongside allies and these huge corporate monoliths?

That's something that I always have in the back of my head as far as the spaces that we hold, the people of the LGBTQIA+ community, and balance whether it's tokenized. I'll say, from my experience working with H&M, it's never felt that way. But that stays in the back of my mind all the time, in any other corporation I look into or that I'm thinking of, how our bodies are being used, if there is respect for our existence. With H&M, it's been nothing but beautiful and uplifting. I'm glad I got to do this yet again in a moment to really highlight our campaign — Child, I ain't ever had no campaign like this before [laughs].

This H&M campaign feels extremely open and vulnerable, something that can inspire Queer youth to live their lives with authenticity and genuine celebration. Where do you find the courage to use your platform in such an emotionally-charged, but incredibly necessary, way?

My confidence usually comes from my roots – my family members. They're the ones who constantly lift me up, the ones who constantly make sure that I'm okay and make sure that my emotional stability is at bay. When that is all said and done, the performing arts – specifically singing and acting – are the things that give me confidence because I can actually speak for those things. I can actually do what I love to do.

I'm a huge fan of Pose, I just have to say. So much of the show revolves around celebration and the sense of community found in the ballroom. If you had to go to a ballroom dressed head-to-tie in H&M, turning looks, what would you wear?

Oh my god. I would definitely wear these sickening booties. They're literally six-inches and I love a high heel. And I would wear a nice, tight little skirt with a cropped shirt. Maybe a flowy, kind-of chiffon but not chiffon, jacket, and just walk in there and strut, honey. And feel like this ethereal goddess that just came in. I love a garment that moves, but tight around the waist and butt. I can't tell you how many times I've gone to H&M and bought me some crop top outfits, for sure.

Pose has been such a huge part of your professional life over the last few years. How are you preparing to say goodbye to your TV family? What's been going through your head as you close this chapter?

The preparation going into that has been emotional. I've been trying to wake up every single day and contact the people that I love on the show, and also have moments watching the episodes by myself and reflecting on the work that we all do together, how far we've come from first season all the way to third season, and the growth of each character and the growth of other people outside of the characters. I had a moment where I just broke down. I hadn't had that moment for a long time. I was always someone who liked to be strong and build myself up. My emotions aren't even shown inside of my physical space. When I did that, I just bawled and I cried. But they were tears of appreciation. They were tears of joy and happiness, because seeing the characters on the screen and seeing an actualized human being and feeling it and emoting, Oh my God. I see you Blanca. I see you Angel. I see you Lulu. I see you Candy. When I did that for myself, It made me realize that I was doing that for a lot of other people around the world too. I look at the work that we've done and I honor it. When I'm in my own space, I thank the people who made it possible.

Depicting such an emotional journey on screen with Blanca and her coming-of-age as a trans woman must feel like such an emotional, overwhelming responsibility. How do you navigate that visibility?

Navigating it in the first season was quite hard. I was showing up, making sure that I did the job, and went home, but didn't deal with my personal feelings outside. When I say personal feelings, I'm talking about the representation and the responsibility and everything that came along with doing a huge mainstream show and also being the lead. A lot of that, I never really processed. Between the first season and second season, there was so much growth. And there was so much knowing of myself as an artist to really step up to the plate. And when the third season came honey, it was everything because everything fell into place. And I mean, I really felt like I was right where I needed to be.

Season three began filming, and the world just turned up on its head. Being so isolated from your on-screen family and coming back onto set, was there almost this moment of being like, 'Okay, we need to do this, this is the last chapter, we need to go all in,'?

When we were in the midst of the pandemic, I was so ready to go back to work, but I think that was just my adrenaline and my anxiety, my anxiousness to really get back and have some fun with the people that I love. But when we got back, my inside feelings changed. This was only the first day, let me clarify. The very next day, we were right back to normal. But, when we initially went back, I had this feeling, this fallout feeling, like something happened, something exploded. It was this eerie feeling of, Wow. We spent a year tapping back into survival mode. So, coming back was a bit weird for me the first day, but the next day, child, we snapped right back into place. Because we knew the weight, we knew the history, we knew the love that we had to emit to the screen for people to feel better through a pandemic. And also, to show them the close similarities of what it's like to go through an epidemic and a pandemic, in the 1990s and in 2021.

You've spoken at length about the importance of Blanca's representation for trans women and men across the globe. Wrapping up Blanca's chapter on 'Pose', what is the next project you would love to tackle revolving around championing these same ideas?

The next project I want to be involved in is a project that centers a strong, affirmed woman of the trans experience. A woman who's not only a leader, but she's a fighter, and she's a physical fighter. She can defend herself and she can protect herself. And she's not the damsel in distress. Instead, she's the heroine, she's the one who gets scratched up, she's the one that can bounce back. Right now, my main project is my music. I think that's the best example of representation when it comes to what we can do as people of the LGBTQIA+ community, we can set our minds on something, we can be actualized the same as normal human beings, you can make a living and you can become people who are pushing the needle forward and who are in the centerfold of change.

I know you've dreamed of working in musicals and working on Broadway. So, finally releasing your first single, "Something To Say," how does that feel? Can you put it into words?

Oh girl, it has been the dream of a lifetime. I've dreamed of being a music artist. I've dreamed of being on stage. I've wanted to perform ever since I was a child. I've been doing it as a child, but not to this magnitude. And I'm just happy that I finally get to get a single out. It's a song that's about people around the world who have more in common than what we think and how we have to band together, no matter the color of our skin, to fight the good fight, show up, and be present. And what a way to do it through music. What a way to do it through a title, having something to say cause honey, Michaela Jaé definitely has a lot to say.

Arriving at this point in your career, so many years later, there's so much hardship and struggle that so many of us just don't see. What advice would you give to little trans girls and boys watching you who feel so lost and have no idea what they're doing at times?