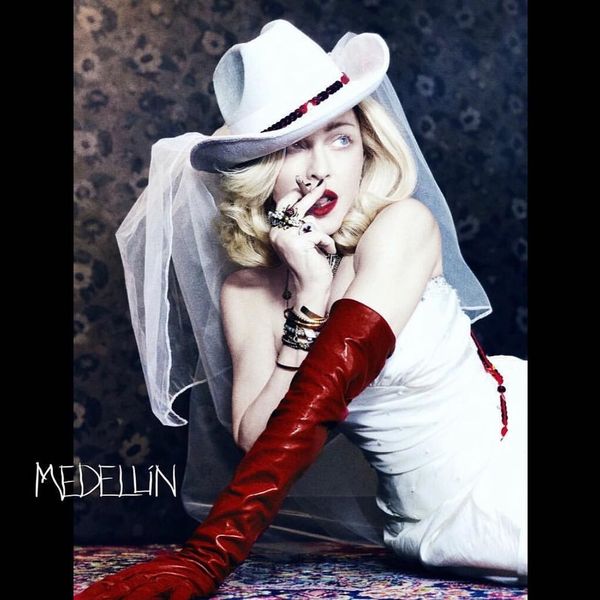 The Queen of Pop is back with her first album since 2015's Rebel Heart. Madonna's Madame X is her 14th studio album, and thus far boasts visuals of her as various noir characters, from spy to cha-cha instructor. It arrives June 14, and you can see the cover below. Our first taste of Madame X is "Medellín," a new single with Colombian superstar, Maluma.

The track, named after the second-largest city in Colombia, is a bubbly fusion of classic reggaeton and breezy dance-pop. Enticingly, it blends Madonna's "La Isla Bonita" era and Maluma's colorful melodies with psychedelic recollections of her recent time spent in tropical countries. The first verse sets the tone: "I took a pill and had a dream (Yo también)/ I went back to my 17 year / Allowed myself to be naive (Dime) / To be someone I've never been (Me encanta)," she sings. Later, she wakes up in "Medellín" from her fever dream and begins a new chapter.

"Medellín" opens with Madonna whispering a catchy "1, 2, cha-cha-cha" refrain that reappears later during a "slow down papi" dance break. Oddly, it's all very ASMR-friendly. Also Maluma, who is appointed Colombian ambassador for this song's five minutes, is Madonna's able tour guide, pledging allegiance to showing the superstar a good time. "Tranquila, baby, yo te apoyo [...] Si quieres ser mi reina pues yo te corono," Maluma sings, which roughly translates to: "Easy, baby, I support you [...] If you want to be my queen, I'll crown you."

Madame X has 13 tracks, including features from Anitta, Rae Sremmurd's Swae Lee, and Migos' Quavo. My personal favorite already, without having heard a single note, is "Killers Who Are Partying." The album's title seems to draw inspiration from a 1908 French play of the same name with numerous film and stage adaptations. Its main character is a mother figure who cheats on her husband and is left to fend for herself. She's described as someone who is "excessively punished for slight deviation from her maternal role." In fact, the alternate cover for Madonna's new album seems to recreate the cover illustration of a 1910 novel adaptation by J.W. McConaughy.

This all makes a lot of sense for Madonna, of course, considering how she has constantly done exactly what no one has wanted her to do. It'll be interesting to hear how she explores these ideas anew come June 14. See the Madame X tracklist below and pre-order it here.