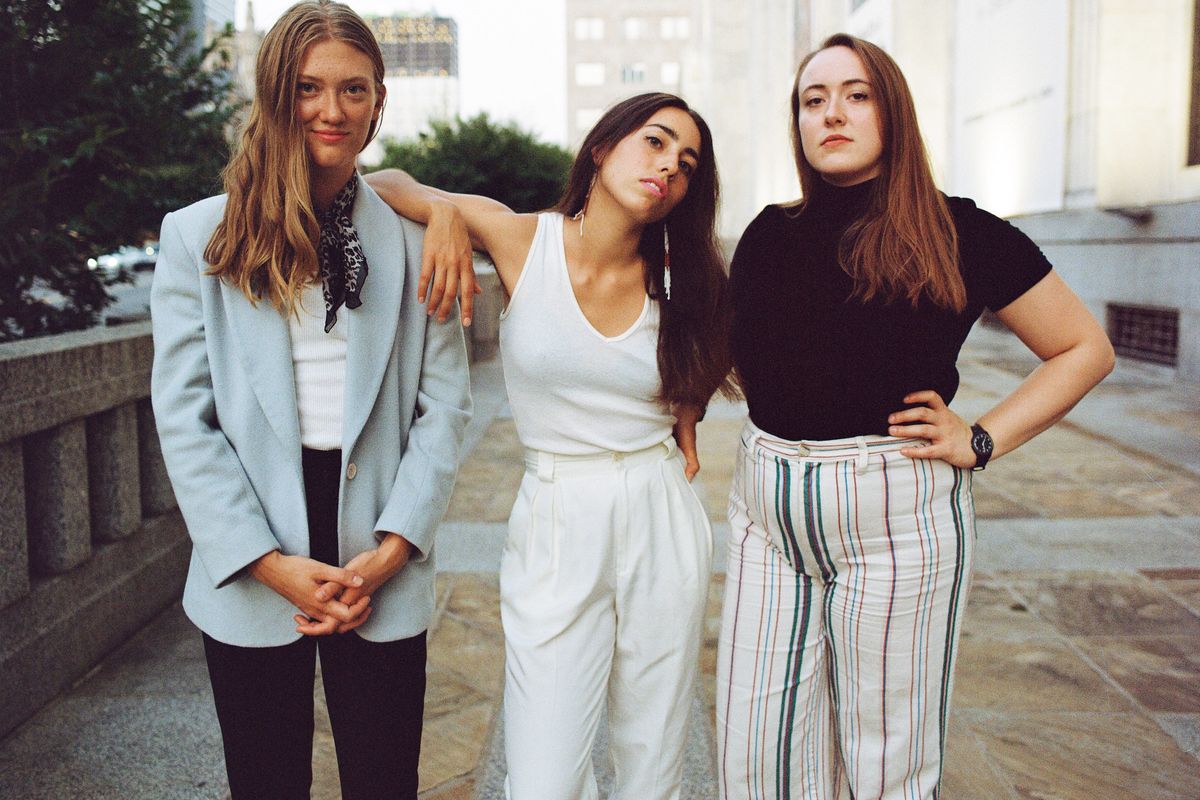 Lula Wiles Is the Millennial Folk Trio Tackling Dating in 2019

Cool — that bland, ubiquitous word — is a plague upon modern dating. Genre-disrupting folk trio Lula Wiles captures this phenomenon in new single "It's Cool (We're Cool, Everything's Cool)" premiering today on PAPER. It tells an eerily familiar story for anyone who's had put on the cool girl act in a relationship pretending, "It's cool/ We're cool/ And everything's cool," when in reality, things are anything but.

The track is a perfect vintage-modern mashup, which recalls 2 AM "I need you" texts, while weaving in classic country twang and a powerful three-part harmony. "It's Cool" is out on Friday along with a B-side, which expands upon Lula Wiles' sharp take on heartache, called "You Only Want Me When You Need Me."

The trio, made up of Isa Burke, Ellie Buckland, and Mali Obomsawin, formed a connection in college over shared folk roots and a desire to make the genre their own. Their lyrics are unconventional, positioned within a community of music that's closely tied to American traditions. The group wields folk tropes to comment on them, which is most obvious in their sharply written track "Good Old American Values" from their latest album. Obomsawin, a member of the Abenaki Nation, criticizes the exploitative way Native people have been represented in country music singing, "Good old American cartoons/ Indians and cowboys and saloons/ It's all history by now/ And we hold the pen anyhow."

Although there's sharp political critique layered in their lyrics, there's something about the group that just feels easy and yes, cool. While a song about the politics of overthinking text messages may not seem as pressing as rewriting American history, there's a freshness to the blatant honesty of the narrative. It's boring to praise a work for it's relatability, but when Buckland sings, "I wanna throw my phone out the window/ So when you don't call me I won't know," you can't say you haven't been there. It's a way of writing about the times that's linked to classic folk music, but remixed in Lula Wiles' prescient style.

PAPER talked to the group about the inspiration for "It's Cool," dating in the digital age, and what's next for Lula Wiles.

Who is the audience for "It's Cool" and what do you want listeners to take away from this song?

Mali: Anyone who texts and dates! I think most people of our generation are familiar with the tiresome, faux intimacy of text-relationships and how confusing they can be. But the convenience of digital dating and the feeling or illusion or reality of being constantly available makes it really hard not to rely on technology. We find that we have to frequently remind ourselves that texting can't stand in for real communication. The song is basically just a "frustration anthem" dedicated to texting, and I hope it provides some relief from the digital angst by helping people laugh about it.

Isa: I think this song also gets at something that's separate from (but related to) the texting predicament, which is that so many people our age are finding themselves in these sort of ambiguous, casual, quasi-relationships where the level of commitment is unclear, and talking openly about feelings and desires feels impossible. It's heavy stuff, but sometimes I'd rather just marvel at the absurdity of it all and play a fun angry guitar solo about it! So I guess if you'd like to laugh about your own frustrations about dating in 2019, this song is for you.

This song gets real about what's actually happening behind the guise of a "cool girl" in relationships. Is this coming from shared experiences of putting on this act? How did those experiences inspire this song?

Eleanor: The title of this song comes from an actual text I sent to someone. Even though the relationship had utterly collapsed, I still found myself trying to save face, by not letting him think I was more vulnerable than he was. And it was sent with a healthy dose of self depreciation since, obviously, nothing was cool. I was literally scrolling back through our text history (as you do), when I came across the text that would become the title, and was struck by how fully that sentence seemed to sum up how I was feeling about the weird non-relationship relationship we'd been having. I wrote the rest of the song in a bit of a frenzy, and honestly it felt like a joke for awhile! But as I played it for a few friends, and eventually the band, I realized the song resonated deeply with people who heard it, and it started to feel like I had touched on something that was real and true emotionally, even though the song hadn't started as something serious.

Isa: I think women often pretend "everything's cool" because we feel that we need to protect ourselves. This kind of dynamic can appear for a person of any gender in any kind of relationship, of course, but I think there's a particularly potent version of it for women who date men. We even lie to ourselves and our friends because it can be so difficult to admit vulnerability. When Ellie brought this song to the band after writing it, Mali and I related to it immediately because we've all had versions of that experience.

How do you work to make your songs both political and authentic about love and relationships at the same time? What challenges or freedoms come with that?

Isa: Our aim with all of our songs, no matter the subject material, is to write from a place of deep, honest expression. So whether that's a more overtly political song like many of the songs on our album What Will We Do, or a "dating protest song" like "It's Cool," we're writing from our own experiences, our own frustrations, and responding to the things we observe around us. We try not to view love songs and political songs as two separate things, and I think that helps us write more freely.

Mali: We're not necessarily trying to "make a statement" when we set out to write songs. I think it helps that we are three songwriters with a lot of opinions and, although we can't claim that we "don't put up with any shit" from the Y chromosomes, we can at least laugh at ourselves about it. It's often most "political" to just be authentic.

Do you have any online dating nightmare stories to share or that influenced this song?

Eleanor: Well, I don't know if this influenced the song, but I have dabbled in the apps of online dating with varying degrees of success. One experience that stands out is a date I had with someone we still refer to as Hot Boring Guy. It's significant in that I remember literally nothing about the date except that we fist bumped at the end of it.

Who are your biggest musical influences both musically and lyrically?

Eleanor: I'm incredibly influenced by Lucinda Williams. She has such a talent for making poetry out of what might be considered mundane and elevating everyday conversational language into something emotive and beautiful. Bruce Springsteen and Anais Mitchell are two others who I sit in awe of, both lyrically and musically. I don't know if she's one of my major overarching influences, I had been listening to a bunch of Courtney Barnett while I was writing "It's Cool" and I was definitely inspired by her frankness and the very frantic energy of her run-on sentence lyrics.

What's next for Lula Wiles?

Isa: We've been touring our most recent album for most of this year, and we're getting road-weary! We're so excited to be putting these two new songs out ("It's Cool" and its b-side, "You Only Want Me When You Need Me") and we see them as a bit of a hint that we're working on new music that expands further beyond our folk origins. We'll be touring the east coast to promote these new singles in November and December, and then we'll be heading into winter hibernation to finish writing our next record!