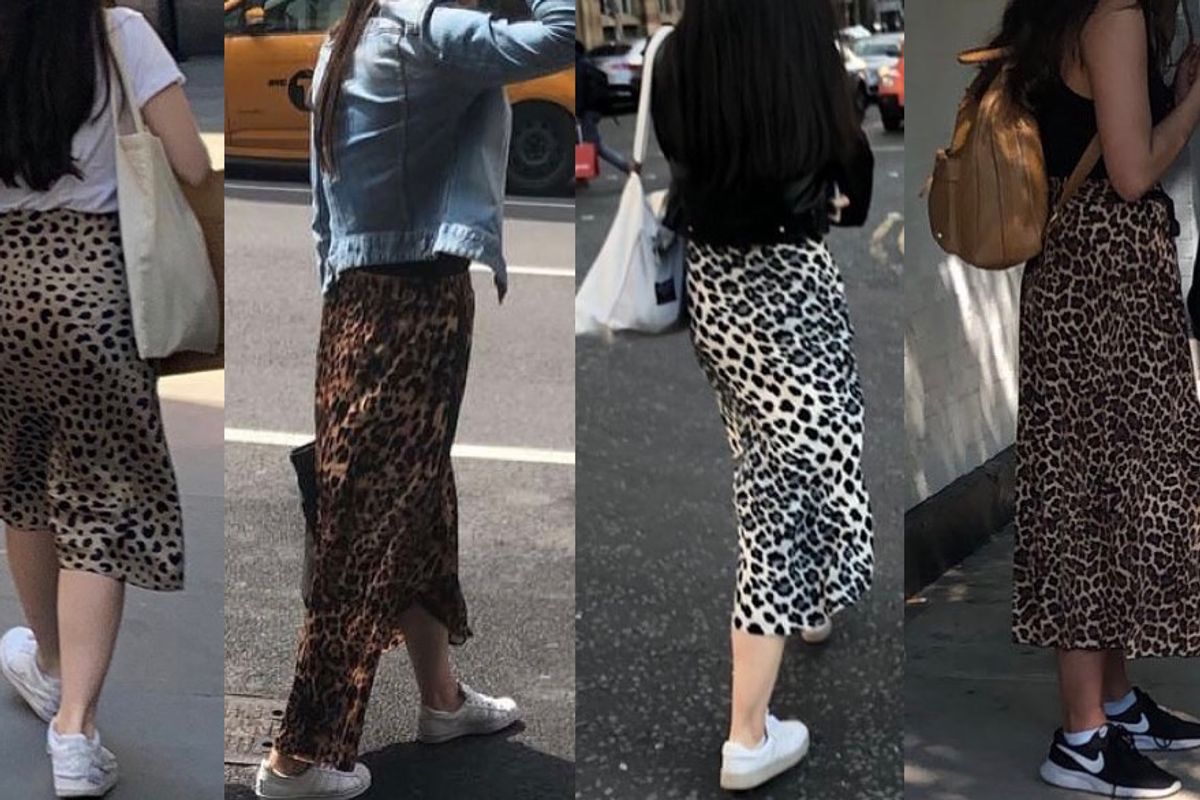 In Defense of the Leopard Print Midi Skirt

"Did every woman in Manhattan wake up one morning and decide to buy a leopard-print midi skirt?" This is the question, posed by writer Jess Bergman on Twitter yesterday, that made me choke on my coffee as I stepped out of the dark damp subway hole into a blindingly bright, mid-spring morning. I choked not because I was laughing at the hapless women of Manhattan in their basic, unintentionally matching leopard print skirts, but rather because I'd been one of them on the very day the tweet was sent. So had one of my coworkers — we'd both paired our spots with a black t-shirt and white sneakers. How I had been so effortlessly clocked by a stranger?

did every woman in manhattan wake up one morning and decide to buy a leopard-print midi skirt
— Jess Bergman (@Jess Bergman)1558562865.0

Spotting a new trend in the wild is thrilling, like seeing a blue-spotted jay darting back and forth between a mesh of green and brown branches, standing out despite its efforts to blend in. Being the one spotted causes a different, more anxiety-induced spike in heart rate. I purchased my leopard print skirt way back in December, barely giving it a second thought before stuffing it in my closet to be forgotten until I dug around in there again on one of the first nice days of the season, ready to peacock my way through Midtown.

Of course, I should have known this would happen. Vogue already warned us that animal print was back and the world was ready to 'hear us roar.' Tom Ford, Diane von Furstenberg, Victoria Beckham, Area, Carolina Herrera — everyone showed animal print for Fall 2018, perhaps reflecting a return to nature, or our primal, animalistic anger at the news cycle. Woman's barbaric yawp at having her bodily autonomy systematically stripped away, a humanistic cry for mammalian values of flesh, blood and skin in the face of our imminent death by AI. Or, okay, people just like wearing animal prints. They always have.

An Instagram account dedicated to spotting the leopard print midi in public is already up and running, its (very funny) sister account tracking That J.Crew Gingham Shirt serving as the blueprint. As the life cycle of a trend — birthed by designers and other creative innovators, raised by early adopting Instagram followers and killed by fast fashion outlets and obsequious consumers — has dramatically shortened since Meryl Streep's famous cerulean speech in The Devil Wears Prada, so has the life expectancy of its cool factor. Does a trend's desirability die the moment it's spotted, turned into a pillar of tacky salt spilling all over the streets of Manhattan (or Brooklyn, or Berlin) under the glare of the Twitter's gaze? Yes, the answer is yes. (For what it's worth, the Réalisation Par version of the skirt was already a huge hit last summer). In an accelerated world, the only true original is the seed, especially if you're a woman daring to make a sincere fashion choice. If you're not a literal leopard, you're basic as fuck. I don't make the rules!

Still. I know why we all fell for the spots in the first place. I'd argue leopard is more potent than your average trend — gingham wishes it had leopard's statement-making appeal. Animal prints contain multitudes, from self-aware playfulness, self-serious sexiness or that renewed favorite, camp. In a post-"Mooo!" world, a cow print Susan Alexandra bag makes perfect sense. In the heat of the yeehaw moment, Solange's actual python skin manicure makes the hair on your neck stand up in a good way. On Kendall and Bella, zebra print reads chic rather than trashy — in a world dominated by real life male villains, we stan Cruella de Ville!

Leopard print has always felt like a second skin to me — as an Extremely Freckled Person, I'm careful about incorporating spots and patterns into my wardrobe, as what can be a smart neutral on someone else quickly becomes overkill. When I have worn leopard print, it's been as a sly reclamation of the "cheetah pattern" skin I've been both ostracized and fetishized for my entire life. All that aside, animal print simply makes people feel hot and doesn't deserve to go extinct. The next time you spot one out in the concrete jungle, let it live.