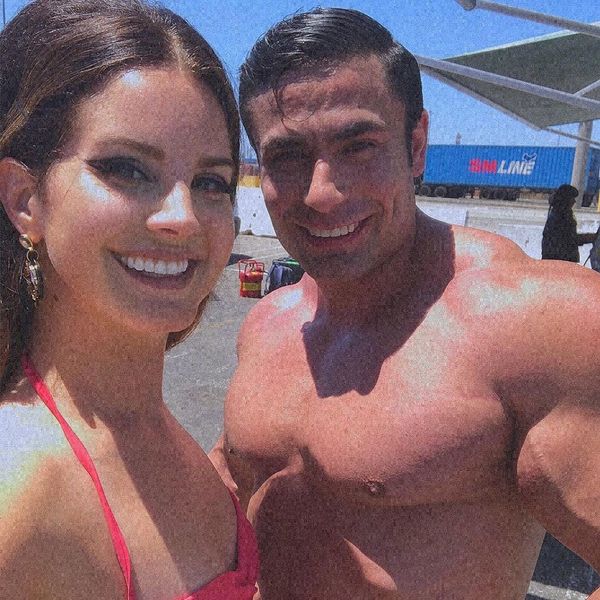 When Lana Del Rey moved to California, she began obsessively embracing every bit of its nostalgia and iconography in her music. Was it sometime during her 2014 Ultraviolence era because she sang new-in-town Spanglish on "West Coast"? Or was it when she fantasized about cruising the Santa Monica streets on "Burning Desire" from 2012's Paradise EP?

Today, she dropped her album's first official trailer, and in it, she hikes through trails, cruises highways lined by pine trees, and leads an all-female cult of fellow travelers in meditation and maybe witchcraft. She also surfs and walks along a big boat in a glimmering sunset. Her glamorous Priscilla Presley bouffant is back, as is her tan and winged eyeliner. She is also a retro Baywatch babe/amateur surfette alongside bodybuilder Brad Swanick.

See? Lana is really leaning in this album cycle, as always.

All this from a woman who was last touring in Ugg boots and has been posting photos of herself in leggings at Easter parties. Now, there is nothing wrong with any of this — comfort for world-class pop stars is key — but a quick scan of the Lana Del Rey sub-Reddit thread (I subscribe!) and other comment sections have debated on whether Lana divorced herself of the oppressive need to maintain A-list upkeep. (Which, note the misogyny of such an expectation right now and nip it in the bud.) Power to her either way.

Lana's trailer was soundtracked by previous NFR singles, "Doin' Time," "Venice Bitch," and "Mariner's Apartment Complex." Because Lana is also a smart cookie who only giveth what she wants in her own sweet time, she shared just one snippet in the trailer we've already heard, and nothing else we haven't heard yet: that of title track "Norman Fucking Rockwell." Make us wait, queen!

But not for much longer. Norman Fucking Rockwell arrives August 30. The Baywatch babe video with Brad Swanick is for two songs, "Fuck It I Love You," and "The Greatest," which will likely arrive sooner. Then on September 21, beginning in Jones Beach and going to Hollywood Bowl, Lana launches eight dates of the first leg of her Norman Fucking Rockwell Tour. (Leg two goes from Amsterdam to Cologne, Germany.) Tickets go on sale, August 9, here.