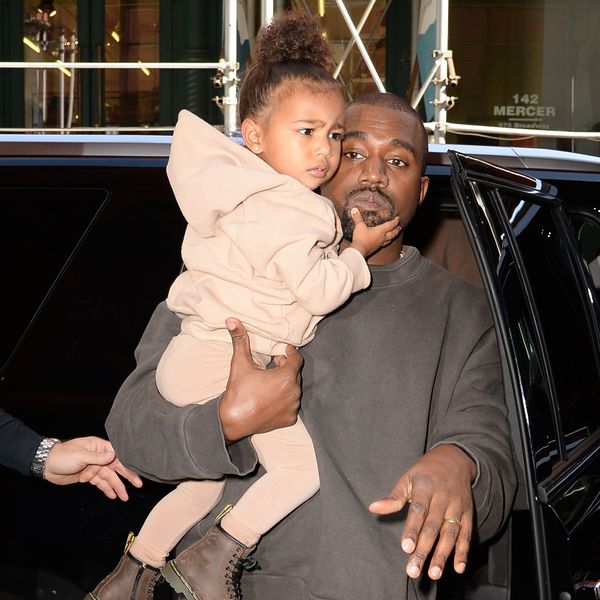 According to Kim Kardashian, Kanye hasn't been too pleased with the 6-year-old's makeup obsession. In fact, Kim said she "got in trouble" with her husband for allowing the burgeoning MUA to accent her outfits with a little lip on occasion.

That said, no word yet on how this new rule has gone down in the Kardashian-West household. After all, it's no secret the former WWD Beauty Inc. cover star is obsessed with makeup, as Kim previously revealed that she has to sometimes bribe her with cosmetics to get her out the door.

Move over millennials, a new generation is coming of age. At five years old, North West, the famous daughter of Kim Kardashian and Kanye West, has captivated the digital realm with her cross-generational appeal. Without a public Instagram or YouTube channel of her own, she’s too young to fully understand what a digital footprint is. And yet, hers is already wildly popular. We’ve watched North West grow on Instagram and “Keeping Up With the Kardashians” and magazines — here, she poses for her first solo cover. Her distinct fashion sense belies her age, and lately, so does her eye for makeup. West, whether she knows it or not, is at the forefront of a generation that is highly connected, engaged with fashion and beauty and individualistic in style. Called Alpha, signifying a new beginning, this age group is unlike any the world has ever seen. And combined with Gen Z, their slightly older counterparts, their numbers are strong. According to the U.S. Census Bureau, in 2025, people aged 17 and under will comprise 43 percent of the U.S. population. Already, they are significant consumers of beauty: According to NPD, 69 percent of Gen Zers use color cosmetics and 68 percent have a skin-care regimen. With numbers like that, Alphas and Gen Z are expected to have a sociocultural and economic impact equal to that of their parents or older siblings, the Millennials. Read more on WWD.com, link in bio. Report: @alexa_writes 📸: @jucophoto set design: @lizzielang hair styling: @chrisappleton1 makeup: @maryphillips #wwdbeauty