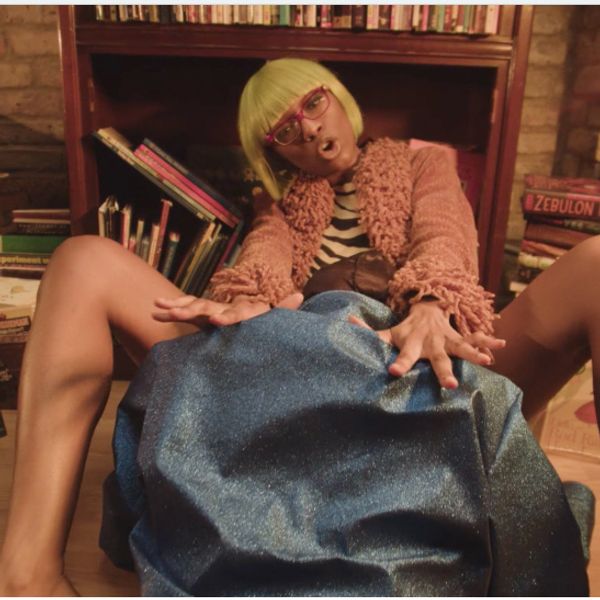 Junglepussy Is the Comedian We Deserve

As an independent rapper and actress, Junglepussy's art has always possessed a refreshing, feminist, and sexy point of view. (See: last year's JP3, her "LMK" collaboration with Kelela, etc.) And if you're not following the rainbow-haired artist's foibles on Instagram, hop to it stat, because JP is also very, very funny, with expert comedic timing.

For instance: She has literally performed whole sets holding up signs saying "This pussy may pop for you," and recently went on IG Live to hilariously call out the majority of people who might still be using their toothbrush from last year. Fans are already familiar with her range of kooky characters, from the overly cocky womanizer Sean to Brownsugar Sunshine Tarot, an anxious, offbeat, and mostly inaccurate tarot-card reader.

Online, JP also has also promoted JPtv, which she writes, produces, and stars in. It's where these characters and more live — a media vehicle for JP's continued exploration of life through humor. As she tells PAPER, "JPtv is my world."

On the latest episode of Junglepussy's JPtv series, I'm In Love, called "I'm In Love With Your Nigga," she parodies the zany relationship drama featured in talk shows like Maury, Ricki Lake, and others, playing five characters in total. The host, Blackberry Love has a soothing voice and flat affect that disguises any potential disdain she might have for her guests, which are three women who have all had sexual or romantic misadventures with Sean. JP says that Sean is a "reflection of her confidence and masculinity."

Those women, Yves, Ashley, and Lisa, all want different things in love and sex, but what's funny is how they all see through Sean's lame attempts to woo them on various dates. We've all seen that before. But in this scenario, JP's leading ladies pretty much get what they want out of the deal, which is.... how it should be? Knowing this, JP animates the women with punchy rap interludes detailing each character's mission to either steal a man away or freely enjoy sex anytime, anywhere — and any way — that she wants. This sex-positive (and, honestly, self-love) messaging runs seamlessly through JP's music.

But highlighting the disparity between sex and true romance is the video's moral center. Blackberry Love says, "Love can make it hard for a bad bitch to separate her dreams from reality."

On the episode's themes, JP says: "I see myself in everyone around me. I'm open to everything but I quickly build a wall when I feel like my worth is being compromised. I'm always exploring the journey from initial attraction to utter destruction, and the unraveling of our layers in between."

Furthermore, JP's vivid characters on I'm In Love, regardless of how one perceives their motives or actions, are all relatable, which is what makes them feel so real. "Everyone has a friend like Lisa," she explains. "She wants the best for herself so she comes off intense but means well. I love Yves the most because she's obsessed with okra and oral sex. Meanwhile, Ashley is all about having a moment. She gives true millennial and experiences a true millennial letdown... [the truth is] we don't know romance, we just watch movies."

Watch the PAPER premiere of Junglepussy's new I'm In Love episode on JPtv, below.