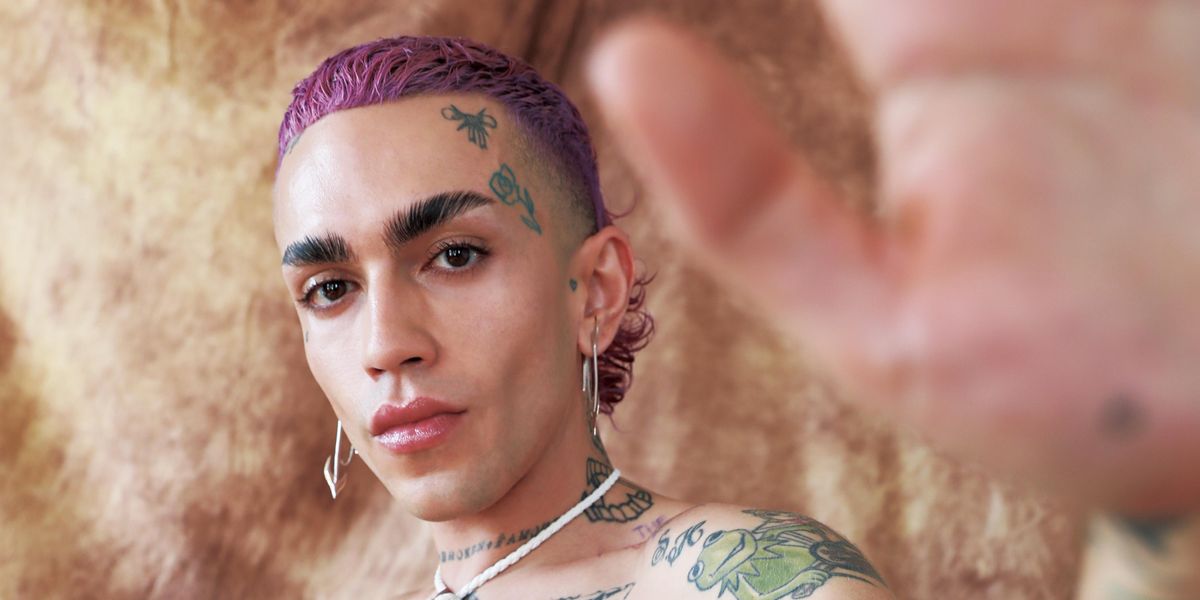 Joey LaBeija once brooded over tears in his Hennessy on his 2019 breakup album, but now he's back with a new sound and outlook. "The sad boy music just wasn't cutting it for me, solely because I'm not sad anymore" says the Bronx-born, Puerto Rican artist, whose single, "heels," explores more radio-R&B production with lyrics that fantasize about the "ultimate partner" worth fiending for — "someone that was tailor-made for you and the relationship you have with yourself."

"Head over heels going crazy," LaBeija sings on the chorus, his chill vocals clearer and more centered than ever before. Previously, he'd pitch his voice down to devilish depths, both out of insecurity and to honor his experimental DJ roots in NYC. But time spent in lockdown manifesting and learning to play guitar landed LaBeija closer to his pop star dreams. "I've been dying to make music that sounds like this for years," he says, finally comfortable in his skin.

Pulling inspiration from acts like the Spice Girls and Nicole Wray, LaBeija's next chapter — or "Joey LaBeija 2.0," as he calls it — is a studied analysis of all the pop greats. He thought about the way artists during the late '90s, early aughts were "perfectly curated" and wanted to play off that hyper-polished, stylized image. For the "heels" artwork, LaBeija even revisited 2001's Josie and the Pussycats to create his own version of the iconic movie poster.

As a first taste of more to come later this year, "heels" is LaBeija at his most accessible yet, widening his reach well beyond the queer underground party spaces he's dominated for years. Did it give Arianee? Did LaBeija give Arianka or no? Listen, below, to find out — and good luck getting its hook out of your head.

Looking at the evolution of your music, this pop direction seems inevitable. Do you think you needed to work through more experimental songs in order to arrive at something like "heels"?

Definitely, but more importantly, I needed to become more comfortable in my own skin in order to make the music I've always wanted to make. During lockdown, I decided to actively try to change my life, the way I see the world and the way my brain processes information so I could free myself from self-limiting thoughts. Putting out music in general has consistently given me the confidence to continue working and push myself out of my comfort zone.

"I needed to become more comfortable in my own skin in order to make the music I've always wanted to make."

The solo material we've come to know, especially on 2019's Tears in My Hennessy, was very vindictive towards men. It sounds like things have changed, so what happened?

While "heels" is about being in love, you know damn well I've got plenty of boys suck music up my sleeve waiting to be released. "heels" came from feeling a huge disconnect from writing about my past lovers. At the time, my brain was laser-focused on my journey to mental freedom and part of that involved manifesting the things I wanted in life instead of harping on the negative and what I didn't have. Every morning I would wake up and do some scripting, writing as if I already had the future I desired. I decided to apply my new daily routine to my music and write about how it would feel to be head over heels in love with the perfect partner even though I was very much single and never felt loved by anyone I ever dated previously.

How have you grown more confident with your music-making over the years?

I have found a huge amount of confidence to continue making music through the people that appreciate and connect with my work. You have to wear all of the hats when you are an independent artist. Personally speaking, it's quite daunting, very overwhelming and can often times incite fear, imposter syndrome and anxiety. There have been plenty of times where I've thought, "Fuck this shit, let me quit music. I make a great living being a hair colorist, why am I putting myself through this unnecessary stress?"

But then I think about the people who love what I do. The ability to create something and have it mean something to someone a million miles away is a beautiful, rare and magical experience that I refuse to squander. I was disguising my voice in my earlier music because I was worried no one would give a shit about what I had to say, let alone take me seriously, so it was a defense mechanism of sorts. I was also making dance adjacent music because I thought that was the only way my work would resonate with people that knew me as a DJ.

What's your process like now and how'd that look this last year in lockdown?

My approach to making music has always been a very painterly and organic process. I can't even remember how I've come up with half of my work because each song is created so differently. It's as if the songs make themselves. During lockdown I taught myself how to — kind of — play the guitar, which lead to me focusing more on music theory which has ultimately turned me into a better and more confident artist. Knowledge is power.

Who're the pop and R&B artists you look to for inspiration?

You've opened up your songwriting to go beyond personal experience. Did that offer you a sense of freedom in terms of lyrics?

Absolutely. I also think finding my inner peace, being more kind to myself, protecting my energy and expanding my mind has opened up a world of creativity I wasn't previously able to tap into because I was blocking my blessings. It's so easy to allow your inner saboteur to drive your vehicle and come up with false narratives, closing doors that didn't even have a chance to open. Nine times out of 10, the only thing standing in your way is you.

How are you approaching visuals this time around?

The inspiration for the "heels" cover came after rewatching Josie and the Pussycats. I've always been fascinated by the pop star tropes created by record labels in the '90s and early 2000s. These artists were perfectly curated, told who to be, what to wear, how to act... they had absolutely no say in how they presented themselves to the world and I wanted to play on that with my visuals for the music I've made over the last year.

Is "heels" reflective of all the music you'll be releasing? What's next?

"heels" is like the gateway drug to Joey LaBeija 2.0, which is why I decided to make it my first single. I've got a handful of songs that could happily exist together as a body of work, but I've put out so many full projects in the past that I just want each song to exist separately and take on a life of its own.