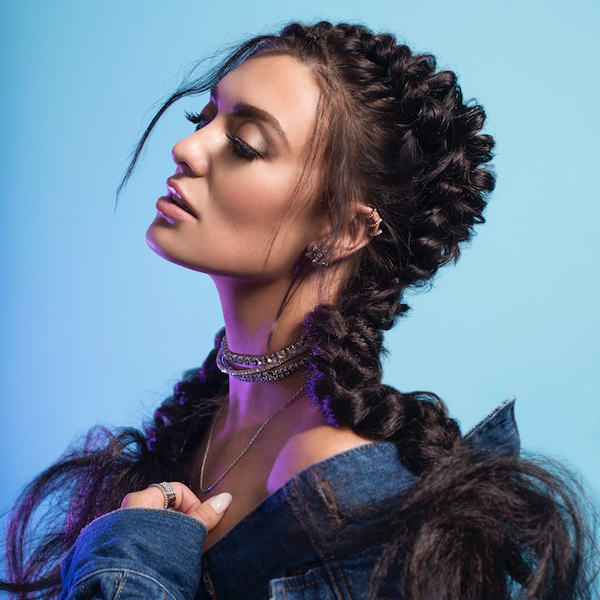 Janine Gives Us 99 Reasons to Love Her

This might be a strange metaphor, but bear with me. The experience of listening to Janine is like applying a soothing balm to your skin. It hydrates and comforts on impact, but ultimately it leaves you lightly fragrant and provides a calming sense of relief to the soul. Which is why you buy more balm when you run out.

Janine is the salve I'm referring to and her music, which finds her healing herself through her honest songwriting and powerful vocal presence, is crafted lovingly enough to stay with you. She first broke through with 2015's critically lauded XX EP under the name Janine and the Mixtape, and Dark Mind EP in 2014. Those records, with songs like "Let It Run," "Hold Me" and "Lose My Mind" found the Auckland-raised artist, who was living in New York at the time, exploring a murkier, moodier electronic R&B palette that recalls the icy early-aughts electro detours of Aaliyah, and the old-school confessional sensibility of songwriters like Fiona Apple, and contemporaries like Banks.

99 is a triumphant, and decidedly breakthrough-the-clouds debut from Janine, one that will surely wear your repeat button out, too. In the writing and production process for the album, she relocated to LA, a place with so much light it proved to be a source of inspiration: "You get the sun every day, and it just puts you in a way happier mood," Janine says. On 99, and on past records, love has always acted as a great muse (love for self, love for others) and source of strength for Janine. But it's the way she writes about it: from the inside out, rather than the other way around, that really makes it stick.

There's a bit of something for everyone here: the take-me-to-church anthem "Too Late" lets a lover know that he missed out on a good thing; the acoustic-backed stomper "Don't Love Me" sets boundaries with a soon-to-be-ex with a marked yearning in Janine's voice; "Hold On" is a radio-ready entree that is definitely more fulfilling than a snack (to quote fellow Atlantic Records labelmate Cardi B). Janine lets us in on her artistic process, the difference between being vulnerable and being savage, and the beauty of being forever a work in progress on the cusp of greatness. Read on and stream the album below.

In listening to this album, you come across as someone who is introspective but fierce. "Don't Love Me" has a reflective and pensive, but biting quality, especially the way you sing the line, "Love someone, just don't love me." "Be By Myself" seems like it's about taking solace inside your shell, but it's delivered with confidence. That said, would you consider yourself an introvert or extrovert?

It's funny you should ask that. I'm definitely a little bit of both. There's a part of me that very much loves being around people, I love connecting, I love being social. But I can also be quite shy in certain settings, more reserved. But if I'm at a party, after a while, I'll want to be in a corner with a handful of people, like one or two of my close friends, instead of the whole crew. Or I'll need to duck off by myself or leave early. After a while, too much is too much, you know?

I do know. I'm very much the same way. So on the theme of looking out and looking in: Your musical approach in general seems to be about vulnerability rather than savagery, which in this day and age, it's easy to rip someone to shreds on wax. You seem to own who you are, including your flaws, in your music.

Thank you! You mentioned "Don't Love Me" earlier and "Be By Myself," which are a few records where I actually do show my teeth. I wanted the overall sound to feel like the R&B music I've always loved, but for it to hit a little harder in certain parts to drive home what I wanted to bring out. I want to appear strong, even if I don't always feel that way. But no matter how sensitive I can be, I can still be pretty tough, when I want to be.

Tell me about the process of making your first record. You released some EPs a while ago under Janine and the Mixtape, and the lead time toward your first album coming out seems longer than the average major-label signee. It seems these days you're hearing about an artist everywhere and three to six months later, their album is out. Was that intentional? Did you feel pressure or did you want to take your time with releasing 99?

What I have to say is that, yes, the journey can be long when you're navigating this business, I don't think there's any secret about that. But my label, Atlantic Records, has really given me so much freedom to say what I want to say and make the sound I wanted to make. You saw the same kind of thing with [fellow labelmate] Cardi B. She was hustling hard, releasing mixtapes and making the sound she wanted to make. Atlantic kind of let her do her thing, so when Invasion of Privacy dropped, it all just felt right for her. She sounded like herself. I'm inspired by that. So while it might seem like it took a while, the same is true for me in a way. I'm happy with the final result of 99 and the way it all turned out, because it sounds like me. I think that's the most important thing, is sounding like myself. Even down to the creative direction, my visual input is all over this, in the video treatments, in the album artwork: I'm putting myself out there, and my fans get to see that, too, which is really a blessing that I'm so grateful for.

I know you did a tour, what was it like singing the songs on this record to new audiences who maybe hadn't heard your stuff before?

It's insane, so incredible. The first time I experienced it to this larger degree, I had sold out a show two days before I was set to play. I went in the room and as soon as I started singing — I wasn't even singing songs people knew — and people sang every word. That happened the whole tour. That feeling is so insanely incredible, coming from New York to LA and having only put out songs weeks prior and have a whole audience singing along. Then, I'd go meet all my fans for an hour after the shows and take photos and talk to them. I love them. I know people always say that they love their fans, but I'm so grateful that I genuinely love my fans. They're awesome people, and I've been in crowds where that's not the case, and I'm not sure how that happens. But my fans are really great people, maybe it's about the music that attracts a certain crowd, but I could not be happier and more grateful.

In reading about your journey, you lived in New York and moved to California. How did that change or affect your artistic process?

It's hard to say, because I moved while I was already working on 99. I was writing and creating, so I didn't feel like the same kind of shift. That said, there's a big difference in light between New York and LA. LA, you get the sun every day, and it puts you in a happier mood. And interestingly enough, if you can believe this, I actually find it more difficult to write when I'm happy, which is funny. But I feel like in life there are phases that influence your creativity more than others, depending on what you're going through. The cool thing about being out here is that everything is so accessible. There are so many people out here that I wanted to work with musically. I feel very free here. There's no restrictions on what I can do.

Do you have a favorite song on the record?

"Don't Love Me" was my favorite at first. Then I liked "Hold On" because it was more upbeat. So I've gone through phases with which ones I like.

"Too Late" is my favorite. The gospel-y breakdown in the chorus is money.

That's awesome! That's an amazingly musical record for me, and so it's cool to hear that it's resonating.

What's ahead for you? I know this is a huge step, making your first album.

In a way, it is a huge step, you're right. When you have a first album, it's hard to see past that, because you're just working so hard on getting it out to the world. I really just want to get back on the road and have that interaction with my fans again. But I'm also wanting to record more for the next album.

Do you know what you might want to say going forward?

Definitely! There's been so much that's happened since finishing this one. I have a lot more to talk about. It's been a tough couple years, but also many great times. But I feel like I'm ready for the next thing. I love this album, and I've learned so much from making it. I feel like I've really developed my skill-set and knowledge as an artist. And also, with being on tour, my voice has gotten a lot stronger in the past few years. I'm excited to show more of what I can do on the next album vocally as well.

I can tell! From 2014's Dark Mind EP to now -- though you were working with a more downtempo musical palette, there was a softer vocal quality, and on this album there are tracks where you're almost roaring.

[Laughs] Thank you! I'm so glad you've picked up on that. It's amazing to notice your own growth. I just want to keep singing — that's where I'm happiest.

Yes, so more than anything 99 could be a person, but it's really a concept I came up with that references this idea of being forever incomplete. Like, your work is never really finished. There's always more to learn about yourself, more areas to grow in, more to love. 99 out of 100, but that's okay. In fact, it's amazing, because this being my first album, too, it's a way of saying to myself that I'm on the edge of greatness. We all are. 99 out of 100 isn't bad, because if you recognize that's where you're at, it means the best is still yet to come.