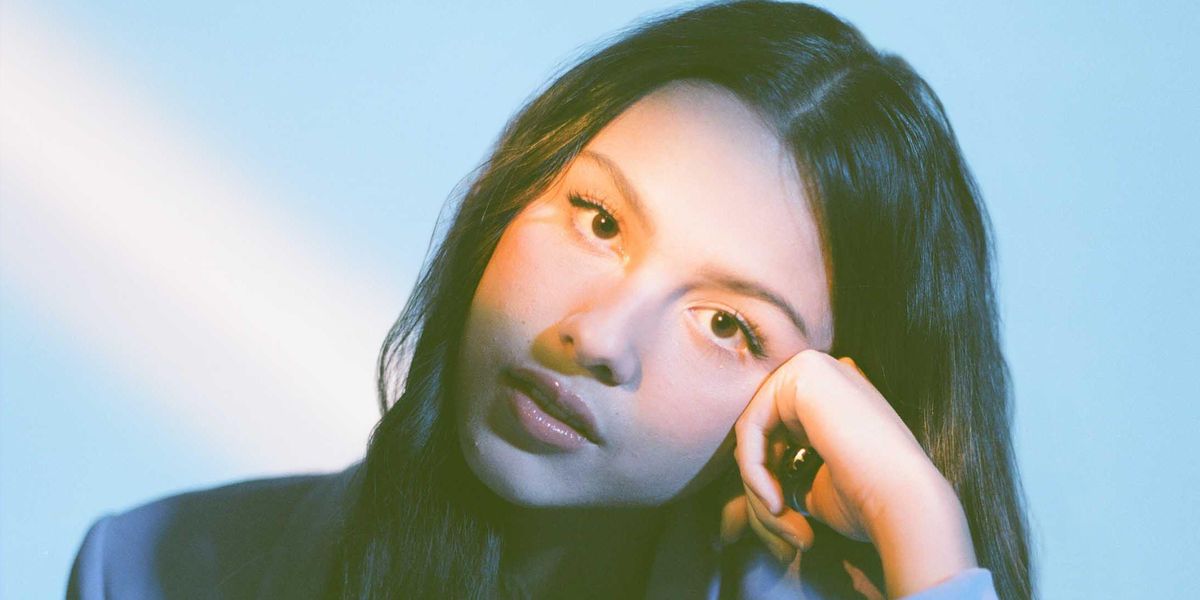 In many ways, Olivia Rodrigo is one of us: a recovering theatre kid (and part-time One Direction fanfic writer) with Taylor Swift tattooed across her heart. In others, she differs. For starters, I'm not the biggest rising pop star in the world. She is.

"It's absolutely insane," Rodrigo tells PAPER only hours after learning that her first single, "drivers license," debuted at the top spot on the Billboard global charts. "What has happened has beat every single expectation I could have possibly had and is totally beyond my wildest dreams."

On the cusp of her 18th birthday, Rodrigo has gone from Disney sweetheart to international songstress, a claim to fame that not even her record label anticipated. "drivers license" has broken numerous records, becoming the fastest song to surpass 100 million streams in Spotify history. And yet, for longtime fans of her sound, it seems less like overnight stardom and more the product of hard work.

Related | Don't Be Surprised by the Success of 'Drivers License'

This isn't Rodrigo's first time topping the charts. Back in early 2020, her self-written tune "All I Want" from High School Musical: The Musical: The Series became an instant TikTok trend, propelling it past Disney lines into wider pop acclaim. Her role on the show as high schooler Nini Salazar-Roberts gave audiences an appetizer of what she could offer the music industry. Now, we're ready for the full meal.

"I've gotten a ton of comments from people being like, 'I've been married for 25 years, but this song still stings.' And I think that's incredible," she says. "I think that that's one of the purposes of music is to really transport you to a deep feeling, even if it might not be one that you're feeling directly in your everyday life."

Rodrigo's deep maturity and self-proclaimed old soul — she proudly admits to watching Jeopardy religiously — are largely responsible for "drivers license"'s universal relatability. A tale of first love, it hits on the five stages of grief — denial, anger, bargaining, depression, and acceptance — all within four minutes and two seconds.

"There's anger that's in it, and there's this sadness and longing," she says. "But there's also this feeling of pathetic insecurity. This song, for me, captures a lot of those aspects of a breakup that I wasn't really able to verbalize before."

That maturity stems from her upbringing as an only child. A Los Angeles transplant from Temecula, California, she spent much of her adolescence around adults, learning "how to talk about traffic and the weather when I was 13." You could say in those days, Rodrigo assumed the role of part-time forecaster, part-time aspiring ballerina: "I made my dad install a ballet bar in our house and would make my parents film me doing ballet dances to crazy songs. And turns out today...I am absolutely the worst dancer that I've ever met."

At 12, she began homeschooling, and found solace in the silence, nestled in her room with songwriting as her outlet. Much of that alone time shaped her voice, as both a songwriter and young woman, which would, in turn, morph her into the "little old lady" she is today (her words, not mine).

And among the artists whose music most inspired her in those early days is Taylor Swift, who Rodrigo has publicly declared her love for on numerous occasions.

"Taylor is the best storyteller of our generation, the way that she can completely transport you to another place in a four minute song is incredible," Rodrigo explains. "I really love the way that she is constantly evolving while remaining true to who she is and her experiences."

Related | How Much Does It Cost to Go Number One?

That level of storytelling is what stands out most to Rodrigo, and understandably so: As a theater kid herself, she understands the value in telling important and impactful stories, ones that can touch your soul and change your heart within the confines or a two-hour production or four minute song.

Other influences to her sound: Phoebe Bridgers and Lorde. But Rodrigo is not simply a byproduct of those who've come before her. She is a rising light, unique and enticing all on her own. "I try to be as honest and vulnerable as I can in my music, and everything else kind of falls into place after that."

While Disney is famous for transforming teen stars into pop divas, Rodrigo has instead signed with Geffen Records, allowing her more freedom to expand on her style without the Mouse breathing down her neck. This appears to be a trend among the new generation of Disney Channel stars. Whereas years ago, the likes of Miley Cyrus, Demi Lovato, and Selena Gomez stayed somewhat close to the network, two of Rodrigo's "HSMTMTS" co-stars have taken a similar route to her: Sofia Wylie has signed with IMG at just 16 years old, while Joshua Bassett has launched a singing career of his own.

Speaking of Bassett, Rodrigo won't comment on rumors that she wrote "drivers license" about their alleged former relationship, but newly proclaimed Rodrigo stans (their fandom name is still being figured out) have taken it upon themselves to look for clues and hidden meanings in the lyrics, pointing their fingers to Bassett as the man who broke Rodrigo's heart. As she navigates balancing vulnerability with stardom, situations like these are bound to occur. But Rodrigo is more excited than afraid.

"It's really exciting for me to put out a song like this for my debut single because it feels like it really captures who I am as an individual," she explains. "And I think for so long, I've been perceived as an actress, and I've been perceived as the characters that I play. And I'm so grateful for all the opportunities I've gotten in that sector of the entertainment industry. But this is the first time I've really put out something that feels like an extension of me and who I am as a person, and that's really empowering."

Rodrigo is set to release more music later this year. She describes the melting pot of folk, pop and rock as a diverse collection of stories pulled from her 17 years of life. As fans anticipate the upcoming release, one truth becomes increasingly clear: Rodrigo is the Gen-Z pop girl we've all been waiting for.

"For the future, I'm going to keep on doing what I love to do, and that's writing songs that are honest to me and my experiences," she says. "We'll see where that takes me. I'm really excited to put out more music and learn more about myself, as a person and as a songwriter."