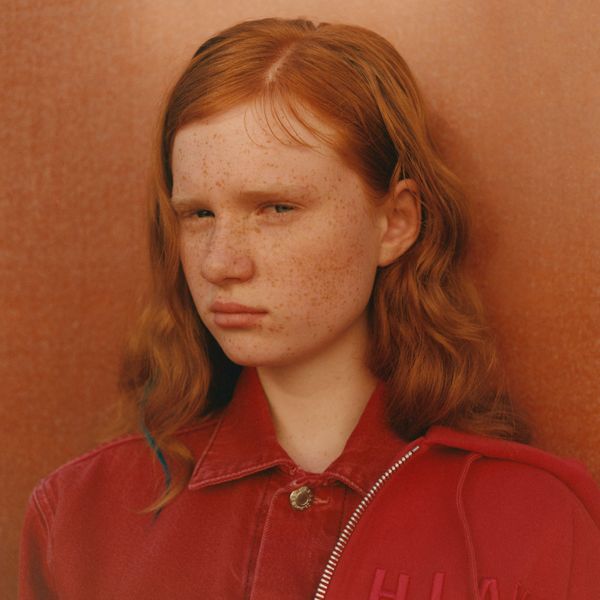 According to this report from the BBC, between 1 and 2% of the world's population has red hair. And gingers, in addition to facing a weird sort of persecution in the UK and Australia, might be dying out (apparently the gene came about as a response to cloudy weather, and with climate change and all… that might be on the way out). So we have to enjoy them while they're here! Red hair is gorgeous!

Enter the Redhead Days Festival, an event that's been held for ten years in celebration of the carrot topped. This year's festival took place in Tilburg, Netherlands. Approximately 25,000 people, including 4,000 redheads from 65 countries, showed up. The main event is a group photo featuring all the redheads in attendance, strawberry hues spread as far as the eye can see.

In a stroke of genius, Helmut Lang decided to hold a shoot at the festival, styling redheaded festivalgoers of all ages in their Fall 2019 collection. In a video directed by Alex Leese, redheads express how they feel about being members of the uh, redhead community. It is very sweet.

"There's beauty in everything, especially uniqueness," says Tyler, a 13-year-old from Eugene, Oregon. "Being a redhead has taught me that."

"There's nothing to be insecure about because being a redhead is probably one of the greatest treasures you can have," he continues. "Like, redheads can make their own Vitamin D. Like a superpower! We don't need the sun. We have red hair."

The video features a number of redheads who met and became friends through the festival, posing in lovely Dutch light. One man even puts his arm around a cardboard cutout of Prince Harry, arguably the world's most famous redhead (who is frequently photographed alongside redhead kids, including a four-year-old girl who came to greet him with a sign reading "Gingers Unite").

PAPER editor Claire Valentine, who boasts a beautiful head of natural red hair, is grateful for Helmut Lang's efforts in this area. "I appreciate Helmut Lang's tribute to the whimsical world of redheads and our unique bond with one another," she says. "Super fucking cute."

We agree. Watch the video, below.