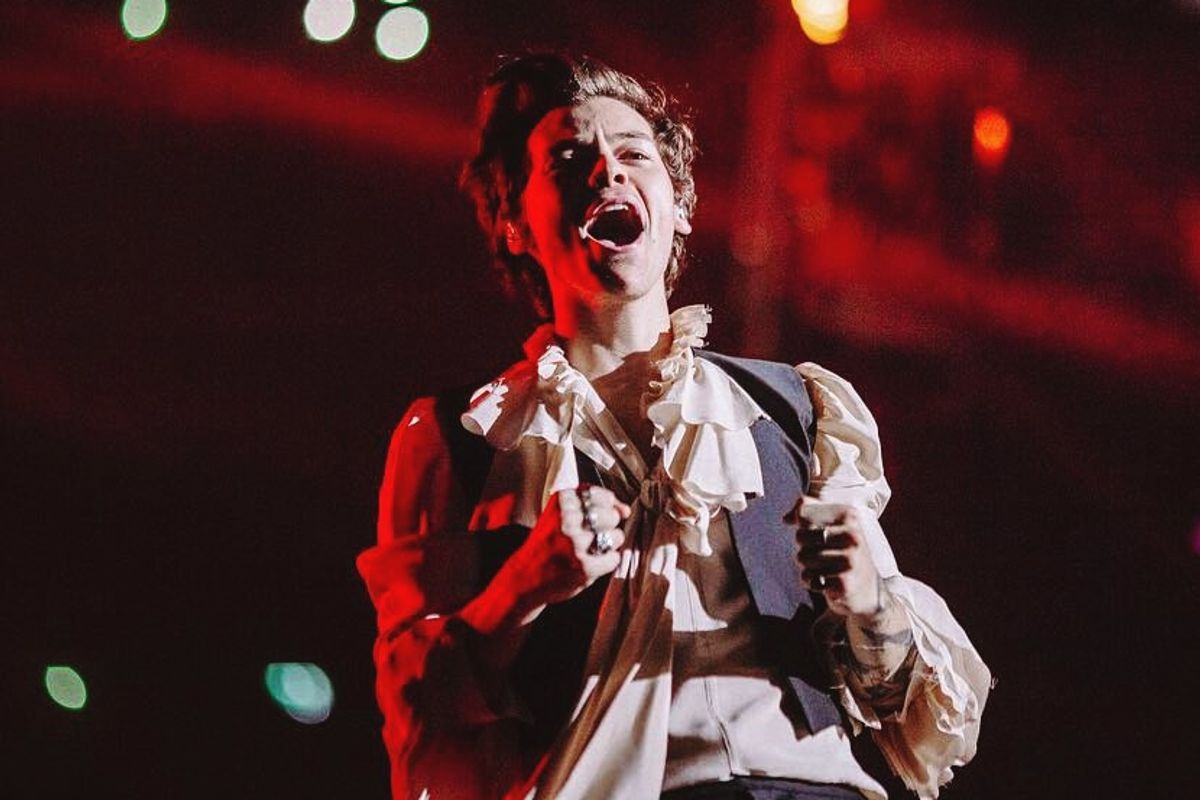 The average student fills their extracurricular time taking shots at seedy clubs, binge-watching Big Little Lies for the sixth time, or getting too high to do anything besides scroll Instagram for hours. Or, if they're Central Saint Martins student Harris Reed, they hole up in their apartment to hand stitch a head-to-toe look for Harry Styles.

The 24-year-old singer wore Reed's "glam rock Victorian prince" outfit at the Amsterdam stop on tour promoting his debut solo album, Harry Styles. While it was a fleeting moment on stage, the garments capped an intense five-month odyssey of fittings, dialogues, and frantic taxi cab runs on Christmas Eve to Styles' house to drop off his custom look.

With a design philosophy that champions fluidity, flair, and the finest silks around, it's no wonder the 21-year-old CSM student ended up on Styles' radar (the pair looks ready to share wardrobes and hair care products). Scrolling through Reed's Instagram feed, you'll see his penchant for billowing blouses, flared trousers, and long, flowing locks of hair.

For Reed, whose designs have already been worn by the likes of Ezra Miller and Solange Knowles, creating a custom look for the man he describes as "the Paul McCartney of my generation" was affirmation of the androgynous, queer perspective he's been cultivating since moving away from his LA home to attend London's world-famous design school.

As Reed soaked in the afterglow of his first major moment and escaped to the sandy shore of Pevensey Bay for a weekend getaway at his aunt's house, PAPER caught up with him to find out how this all happened, the importance of Styles' sexuality-referencing new track "Medicine," and being his unapologetic, full self.

Fantastic! I decided not to do anything this morning, cancelled my meeting and went to my aunt's place.

You deserve it. You just dressed Harry Styles.

(Laughs) It's an appropriate vacation in my head. I needed it at least for a day.

Exactly! Recreate his "Sign of the Times" music video. Do the whole thing.

The helicopter is picking me up right now to fly over Northern Ireland.

Perfect. Okay, first off, how did this happen? Walk us through it.

A year and a half ago, I created a garment for this event called White Thursday at Central Saint Martins. I made this ensemble that was my first piece I ever created and I had this long backstory about finding salvation within oneself and in one's sexuality. I created this metaphorical character and storyline that was very honest and very myself.

The first person to ever pull it was Harry Lambert, who is the Editor at Large at 10MEN and Harry Styles' stylist. We worked with each other throughout the entire year on different projects for different magazines — editorials and things like that. He pulled my stuff a few times for Harry Styles for certain projects, but it didn't fit or never really worked out.

Five months ago, he reached out to me after I did a bunch of hats for a shoot he was doing in Amsterdam. He said I was ready to put my work forward for Harry [Styles], and that we should meet. I'm not a tech person, so I put together this hand-drawn, cutesy design board with swatches and all of that. It was to show him where I could see his style going — moving a bit more into a glam rock direction. A bit more David Bowie and Jimi Hendrix and Mick Jagger.

It was... not flamboyant, but more fluid. Everything that I'm about as a designer. So, I designed all the pieces and went to go see Harry Styles before one of his shows on the first leg of his European tour. We sat down and had the most amazing back-and-forth about all the pieces. He was super excited and Harry [Lambert] was super excited. It was amazing because when I was there, he had all of his clothes for his shows and it was all Gucci, YSL, and all of that.

Harris Reed on Instagram: “I write this with tears streaming down my face. I am beyond honoured and humbled to say that my first ever client is the incredible,…”

A great group to be included in.

It was amazing that they believed in me and took a chance because I'm obviously still in school. After that, I handmade all of the pieces basically in my kitchen. It was amazing. Right before Christmas Eve, when I was absolutely dead and hadn't slept whatsoever, I took a taxi — and almost missed it — to Harry Styles' house to give him the pieces before he left for Los Angeles and he tried them on and was so excited. Yeah, that's basically the story.

Were you fangirling when you met him?


The thing that's so funny is that this was my first ever, proper design meeting so I was more stressed about that than I was about meeting basically the Paul McCartney of my generation. I loved One Direction and I love his new stuff, but going into it, I was more terrified of having the meeting so that overshadowed the fact that we were meeting literally at his concert where 10,000 screaming girls were at. I just wanted to find a pencil to take notes.

What is your favorite Harry Styles song?

"From the Dining Table."

Strong choice. You've had a few other celebrities wear your work, but how did it feel to have Harry Styles specifically wear your clothes?

With Harry, what was so beautiful is that he understood me. When we first met, he knew my backstory and that I came out as gay when I was 9 years old and lived in Arizona and got bullied and moved. He knew so many personal details and understood that for me, clothing is an armor. He completely understood that vision.

For him to wear my stuff on such a grand stage? I couldn't stop crying for two days. It wasn't even because he's Harry Styles. It was just seeing so many people email me and send me messages about how happy people were to see him in my designs and pushing a sense of fluidity. I love the word fluid because it represents so many things and doesn't have to identify anyone to any sex, gender, or anything. It's just a way of being.

It's also so fun to wear flowing clothes.


He obviously always wears amazing structured pieces and tailored suits, and when I made the designs, a lot of them were more out there and crazier, but I had to keep in mind his fan base and bring it to a place he's comfortable with.

The thing that I kept pushing was that, even with the flairs, he was really free to express himself on stage. A lot of the time, performers wear clothes that are so constricting. I love a beautiful suit, but as I'm sure you know from wearing fabulous clothes, you feel your most free when you can run around in silks and lush fabrics.

I don't want clothes to wear me.

Exactly! And he wore that look. What was great too is that he's never really posted a photo of himself on stage. He usually posts it of the fans because they've been so amazing and supportive, so it felt really special. I feel that he really understood and got every bit of it. He was so excited and it was such a great step for him, especially with his new song "Medicine," coming out with that slight reference to his sexuality.

Related | Is Harry Styles Coming Out in His New Song?

I hope that song will allow people to let him be. There were so many years where people almost bullied him with rumors of his sexuality.

As you're saying, nobody owes anyone an explanation for themselves and who they are. I love the song in general and to have him singing it while wearing my clothes is fantastic, but I hope that now people will let him be and let him focus on being an artist and an icon.

He's definitely iconic. Let's talk about your personal style because you and Harry could definitely swap wardrobes.


That's so funny because the flared pants that I wore for our first meeting are the flared pants I recreated for him for his outfit he wore at the show. My pair were a silver leather with silk chiffon coming out of the bottom and he looked at me and said, "Okay I need those trousers and those shoes" because I was also wearing platform boots. I said I could help him out with one of those and I obviously tweaked them and changed the design a bit, but they were completely based on the trousers I made myself for our first meeting.

Have you always dressed in this really fluid, androgynous style or was there a point where you started to shift into it?

It was honestly from moving. I'm from Los Angeles and moved to London because I always knew I wanted to go to Central Saint Martins. I thought I had a good understanding of style but the second I got to London, my friends threw me in a complete 180 because everyone I was around were wearing broken toothbrushes in their hair and had one eyebrow — just total art kids trying to find themselves. They're the most fashionable people and most of them have no money but look incredible. It was a huge wakeup call for me.

In LA, I've always looked very feminine and everyone mistook me for being a girl or transgender. It never really bothered me but London fully let me embrace it. Even working with Solange and Ezra Miller helped give a validity to my identity — not that I need confirmation. It just allowed me to be who I am. All of the comments from everyone on the street obviously bother me because I'm a human being, but I don't give two fucks anymore. I'm being my full self.