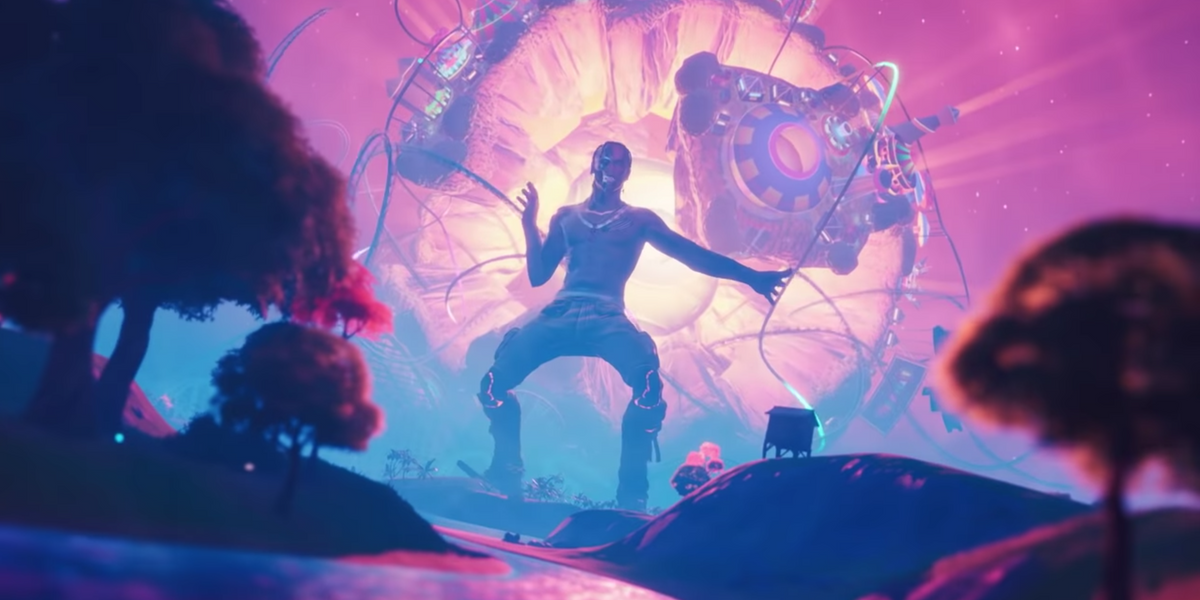 by Will Gendron
Paper Magazine

Music fans from future generations will probably ask their grandparents whether they were playing Fortnite on February 9th, 2019. A little over a year ago, 10 million people gathered for a virtual Marshmello concert in Pleasant Park that would accidentally become a blueprint for live music in a scary new isolated world.

Three months into the COVID-19 pandemic, that first foray into in-game concerts for Fortnite developers Epic Games already feels like it took place a decade ago. But its place in history was ensured at the end of last week, when Travis Scott revisited the format with some crucial improvements. His wildly successful three-day festival event "Astronomical" saw a god-like version of himself implanted into the game map to perform a 15-minute concert for 12.3 million concurrent viewers during its opening night. That exceeds the population of Belgium.

While the Marshmello event stuck to the idea of emulating a real-life concert — players gathered around a stage equipped with lighting and monitors, the artist encouraged them to jump up and down — Scott leveraged the fact he was performing within a video game to create something new. The concert could never have taken place in real life, and no one was pretending otherwise — especially not me.

I get to the show early. As at physical venues, players are encouraged to show up before doors opened to secure their spots, and despite Fortnite's capacity to handle millions of concurrent players I find myself developing new habits. Prior to the performance, everyone is dropped into a standard team rumble game where a small countdown stage is situated at Sweaty Sands, an island on the map. Weapons are available and if killed, players can parachute back into the game. Just like a basketball player getting off a windmill dunk in the final minutes of a blowout, it's unsportsmanlike to actually kill others during an in-game event. I record 26. I'm not here to make friends — I'm here to permanently alter my worldview.

A few minutes after the countdown hits zero, there's still no sign of Travis. Is he going to bail? Running late? Maybe got too lit last night? And then the unmistakable intro to "Sicko Mode" begins playing as an Astroworld-like terraform descends toward us emitting a purple beam that gives birth to a 100-foot, shirtless Travis Scott. He's ripped. The force of his entrance rockets everyone backwards, while my controller rumbles in-sync to the first verse. Looking upward, the skyline has the color palette of an A24 coming-of-age film.

Related | Iconic Video Games Are Being Turned Into Virtual Stages

For this concert, the stage is the entire world of Fortnite. Lighting isn't provided by digital AV equipment but rather the atmospheric layers of the game, and the artist himself is immortal. "The Marshmello one did have some visual effects, but it was mostly just lighting," Lucas Yoshi, a prominent Fortnite leaker, writes to me over email. "The Travis Scott concert brought in a lot more elements, from the big planet that was flying in and reactive, to the massive amounts of visual effects and interactions done on the player. Whereas the Marshmello concert was just a few looped animations, the Scott performance appeared to have been motion captured."

Maybe someday there will be a half-baked term paper written about Astronomical as a metaphor for the singularity brought on by post-capitalism. Players excitedly congregate together in the hopes of participating in something great. A demi-god with P90X-induced abs sporting his own Nike collaboration sneaker is sent to liberate us all with bangers. As our savior slowly turns into a machine, the world burns, trips out into psychedelia, becomes submerged and then is stripped to code. The players, powerless to change anything, float aimlessly through space as a snippet of the new Kid Cudi feature plays.

The initial Scott set was repeated via encores several times over the weekend, with 27.7 million unique players attending. Unlike a real music festival, Astronomical wasn't designed to be experienced in its entirety. "An hour would be too long. Ten minutes is perfect," Gavin, a friend's 15-year old brother, tells me over Facetime. "My friend Ian was crapping his pants."

These short bursts of time are ideal for a generation that grew up online and have infinite services jockeying for their use. Fortnite doesn't hold the same unanimous appeal since its rise in the spring of 2018, thanks to an influx of pre-teens and brand collaborations, plus legal controversy surrounding uncredited intellectual property lifted from primarily Black artists. So the game aims to use these events as a way to dominate the cultural discussion for a brief period with gaudy statistics that hopefully draw in new players.

Even people who don't play anymore are willing to log on solely to participate in these one-off events. "I had to sit around for a pretty big update, but it was worth it," Liam, another friend's 17-year old brother, explains. "Honestly, I enjoyed it, but there's always going to be a corny factor."

It's worth it for Epic, too — the developer is able to cash out from purchasable cosmetic items modeled after the likeness of performing artists. According to an early 2020 report from SuperData, Fortnite made $1.8 billion in revenue over the course of 2019, solely from in-game microtransactions. Artists reap corresponding benefits. On Travis Scott's own website, almost half of the merchandise made for Astronomical is sold out, including vinyls, controller accessories and hoodies. The event helped propel "The Scotts," a single teased during the show, to the top of the Spotify Global 200 charts — the biggest global streaming debut of the year, with nearly 7.5 million streams edging out the collective influence of Billie Eilish and the James Bond franchise.

Not every musician is suitable for an in-game Fortnite concert. Rap and hip-hop artists are obvious choices, as they typically skew towards a younger demographic and sit atop the world's most dominant musical genre. Any prospective artist seeking an in-game concert would need a significant level of recognition, considering the precedent set by the only two people who have performed on Fortnite so far. The inner-workings of these partnerships aren't exactly clear either — who is paying who for the publicity?

But live events may take years to return in the way we know them, and limitations are revealing themselves as the number of artists pivoting to Instagram live streams increases. The front-facing camera concert always feels like a concession, not a choice, whereas the Scott set on Fortnite felt deliberate. As money flows from venture capitalist funds into VR technology startups, PR teams for big-name artists could certainly suggest Fortnite as an alternative to playing Nirvana covers in the kitchen. With live events on hold indefinitely, major music festivals like Coachella might look to the platform as a potential landing spot. This kind of partnership might require players to pay, but the young fans I spoke to weren't against it. "I would pay for that, if they had Rolling Loud in the game. I might spend like 30 bucks," Gavin tells me. "Depends on the price, but given everything going on, I would pay if it was an artist I liked." Liam echoes.

My monitor flashes white as Mike Dean's unmistakable synths bring me out of Astronomical and back into reality: a game of team rumble. Unable to leave for at least a minute, presumably so Epic can gather attendance numbers, I continue racking up kills. At this point I'm a basketball player who is relentlessly shooting threes in an empty, dark arena. There's a noticeable lack of post-concert adrenaline and sweat while I go back to the home screen of my console. Standing up I find myself wanting to listen to "Sicko Mode," and maybe even "Stargazing."

If you're not 15 years old or an avid fan of the game, it's easy to react with indifference to events like Astronomical, or even laugh at them. "I'm going to the Travis Scott concert in Fortnite," feels more like an algorithmically-generated sentence than an actual thing someone would want to do. Comparing video game concerts to live shows is an exercise that benefits nobody, and the former can never replace what it feels like to experience an artist in real life alongside other people. But in-game concerts function as their own beast, and for now and the foreseeable future they're what we've got.