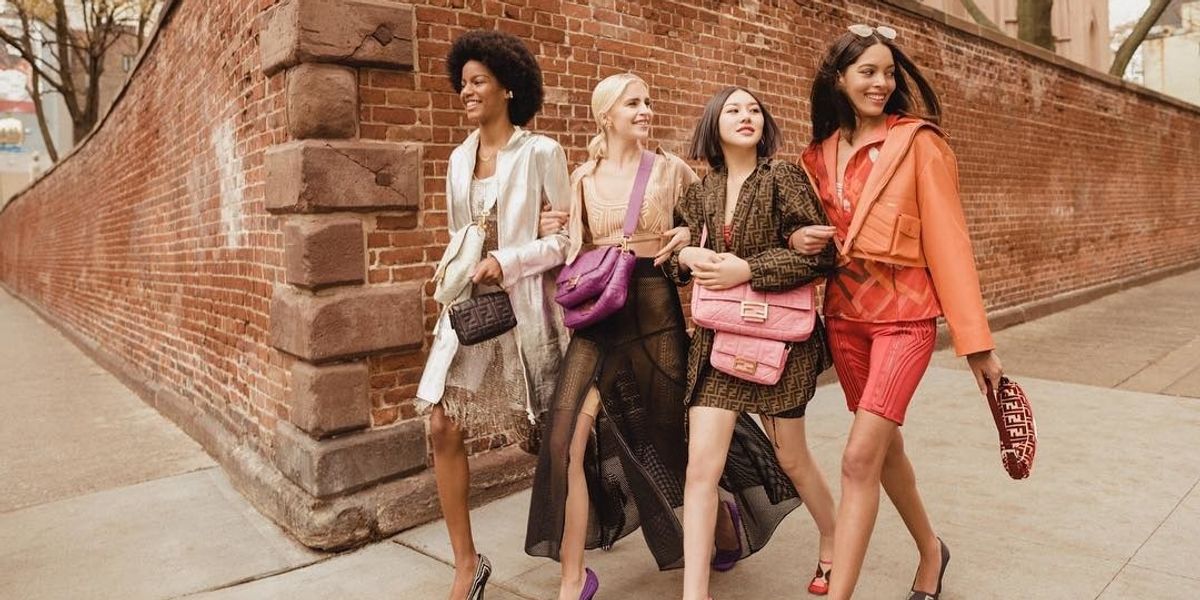 Carrie Bradshaw's iconic outfits never lost their appeal. The Sex and the City heroine, and more aptly her famed stylist Patricia Field, inspired countless looks whose references have effortlessly lived on. From singlehandedly turning Manolo Blahniks into a wardrobe essential to making a pink tutu worthy of a fashion applause, Sarah Jessica Parker and Fields had a stylistic foresight which has yet to be mirrored in any other television series. And one of Bradshaw's most beloved accessories — the Fendi baguette bag — is reliving its moment alongside the actress who propelled it into the spotlight two decades ago.

In Fendi's latest #BaguetteFriendsForever ad campaign, German influencer Caroline Daur reprises the Carrie Bradshaw role as she tracks down the newest purple sequin baguette. Alongside Natasha Lau, Ebonee Davis and Melissa Martinez, Daur gushes about her newest fashion obsession, and tells her friends that she must buy it immediately. However, once the four friends arrive at the Fendi storefront, Caroline finds out that someone has just purchased the last of the purple sequins.

As Daur rushes to the sidewalk to identify the baguette bandit, she runs up behind the woman, clad in grey Manolos, and exclaims "Ma'am, I need that bag!" However, Sarah Jessica Parker then turns around to face the four women, and reminds them "Oh, this isn't a bag. It's a Baguette."

According to the Financial Times, the original baguette, which debuted in 1997, has been sold over a million times in addition to the thousands of style variations that have debuted over the years. Fendi isn't the only high fashion staple to revisit one of their successful "it" bags — Dior brought back their iconic Saddle Bag just last year.

In the 2019 revamp however, Fendi will offer the silhouette in a number of different sizes, detachable shoulder straps, and a cross-body iteration. Silvia Venturini Fendi, the brand's famed creative director of accessories, acknowledged the nostalgia which inspired the bag's return, but noted that the relaunch will feature a new age baguette. "We like change, but there's also a bit of nostalgia," says Venturini Fendi. "It's nice to see things come back, but in a different way."