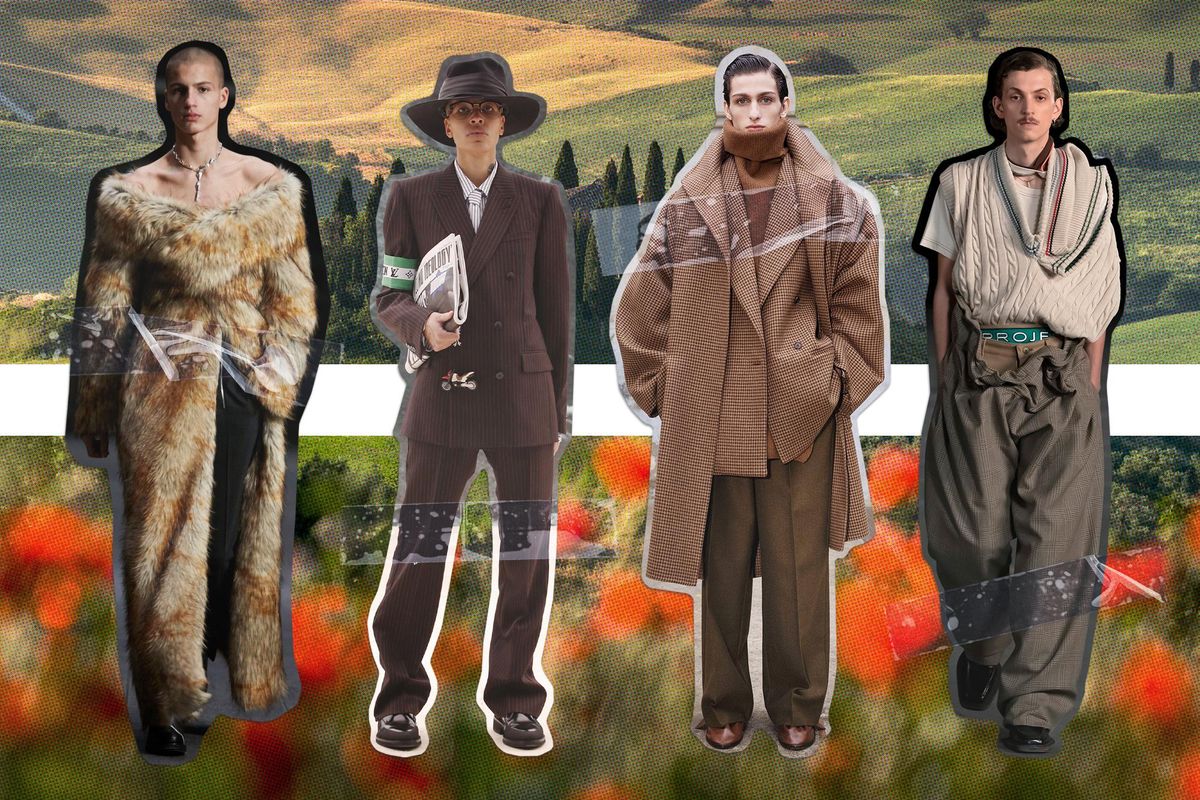 Every Menswear Moment That Mattered So Far

Another men's fashion month has passed, and this time, NO ONE was allowed to have an audience physically present due to the ongoing coronavirus crisis. (Last season's show formats were similar except brands like Etro and Dolce & Gabbana still staged live shows with guests in attendance.)

Most menswear labels presented films in two camps: on one hand you had the artsy narrative-style film and on the other a recorded runway show. Some skipped the medium altogether and just released a lookbook. The collections were shown as part of Milan and Paris Fashion Week, which feels weird to say since everything was digital. It could have been part of Mykonos Fashion Week and no one would know the difference.

So what did that leave us with? LEWKS, henny. Some came from shows that pleasantly surprised us like Louis Vuitton and others who gagged us like Hed Mayner (y'all better put some respect on that man!). Lazoschmidl naturally came through for the gays, GMBH is making man cleavage hot again and Loewe made the leather pants of my dreams. Even Vetements, which we haven't heard from in a minute, became a topic of discussion again.

That said, some went the predictable route and decided to team up with another artist (groundbreaking) or played it safe with the same sleepy Italian suits. Ok, most of them did. Which is why we've rounded up the brands that managed to cut through the noise and had people talking, for better or for worse. From history-making representation to gloves that can fit your poppers, here are the menswear moments that mattered for Fall 2021.

The Lazoschmidl Cake Vests for Gays

It's not often you see slogans like "Tops Can Be Femme" on a Paris runway, but leave it to Lazoschmidl to bring some levity and good ol' queer fun to the proceedings. The Swedish brand showed knit vests with hand-embroidered cake paintings by artist Scott Csoke (whose work often explores homoerotic sexual themes) featuring more "emotional stress" statements like "Gay Art isn't Just About Sex Or A Naked Guy On A Bed."

Prada is no stranger to getting the meme treatment this year, so it comes as no surprise that the brand had a few more viral tricks up its sleeve for its first menswear presentation under Raf Simons and Miuccia Prada. The models' leather gloves with a zipped bag compartment instantly spread all over Twitter, with everyone chiming in on what they could fit inside (airpods, keys, poppers, will to live etc.).

The First Black Trans Model to Walk for Louis Vuitton

Spoken word poet and activist Kai Isaiah-Jamal made history as the first Black trans model to walk for Louis Vuitton this season in a career-defining collection for Virgil Abloh at the storied label. Titled "Ebonics," the show (which was styled by new Dazed editor Ib Kamara) was informed by James Baldwin's essay "Stranger in the Village", exploring themes of origin and ownership through the figurative notion of the art heist.

It wouldn't be a Vetements collection without some controversy or just plain bizarre moments. It's been a year since they last showed a collection — remember those celebrity doppelgangers? — and this time around, they went big big big: 165 looks to be exact. The balaclavas, the insane animal slippers, the ironic slogan sweats — it was all a lot to take in. The blue streaks on knits that reference paint that Hong Kong police sprayed on democracy protesters last summer also didn't sit too well with the Internet.

Just nine months after launching his eponymous label, Arturo Obegero joined the official Paris Fashion Week Men's schedule for the first time, an impressive feat for someone who only just got his M.A. from Central Saint Martins in 2018. Known for his romantic sensibility and dance leanings, Obegero used old velvet curtains collected from theaters around the world for his upcycled menswear collection. Titled Puro Teatro or pure theater, the clothes are a tribute to tribute to performers, seen in other references like his signature red rose, which are a nod to the tradition of throwing roses on the stage at the end of a performance.

The Random Vegetables at JW Anderson

Only Jonathan Anderson could make fruits and veggies feel provocative and graphic. The designer was inspired by iconography and still life, so he incorporated everything from peaches to squashes to pumpkins to radishes to lettuce to cauliflower in tabard sweaters in in the accompanying collection shoot.

Speaking of Jonathan Anderson, the Loewe collection he designed also played with graphic jacquards and surreal collages, but it was the sickening all-belted punk leather trousers — which the designer said was worked out of shearling or turning back worn leather — that was giving EVERYTHING.

If women can pull off the lingerie-under-outerwear look, why can't the men? Rick Owens seemed keen on exploring those gender-reversal roles when he paired his brand's first main-line underwear offering — white briefs stitched with a pentagram — with nothing but a coat and platform boots in a show that examines the idea of male aggression.

The Perfect Collection Does Not Exi—

Hed Mayner first emerged on the global scene when he won the coveted Karl Largerfeld award at the 2019 LVMH Prize (the main award went to Thebe Magugu). Two collections in, it's easy to see why the Israeli designer has caught the attention of the industry — not many designers can make minimalism look so cozy and sharp at the same time. This collection's oversized proportions, enveloping coats and dramatic shoulders manage to push the boundaries of menswear while remaining wearable and covetable at the same time. Keep your eyes on this one!

His first time showing men's and women's looks together, Y/Project creative director Glenn Martens solidified the codes of the house by doubling-down and refining his signature baggy, asymmetrical silhouettes and clever layering techniques. The bosses at Diesel have clearly been feeling Martens' subversive work, having installed him as the brand's new creative director.

Man cleavage has had its ups and downs over the years, but no one has made it feel as seductive and glamorous as GMBH did at its FW21 fashion show, which utilized a criss-cross, shoulder-wrapping technique which gave a new take on the off-the-shoulder neckline. It reached peak glamour with the final faux fur looks, which oozed an Old-Hollywood sense of sex appeal usually reserved for the ladies.

This collection from Dries van Noten may been have pared back slightly, but his cerebral take on savvy menswear provided some didn't-know-we-needed looks like the soft leg warmers he paired with shorts. (The leg warmers with matching gray drawstring shorts and cardigan will live in my mind rent-free all year.)

Photos courtesy of each brand