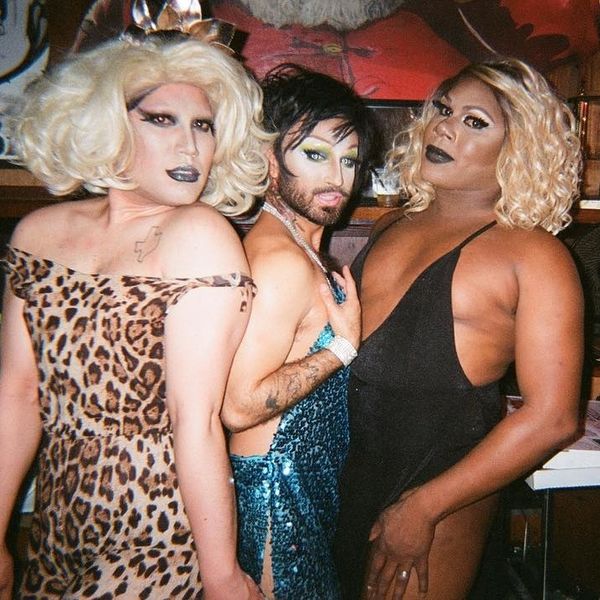 This Party Is Extremely Fake and Gay

The resurgence in popularity of the qualities that made pop music great in the '90s — cute synths, earworm choruses, and sleek marketing — have inspired an entire generation to create their own projects with those qualities. That's exactly what San Francisco-based DJ extraordinaire Adam Kraft and drag star Sarah Slay have done for FAKE and GAY.

FAKE and GAY started out as a party boosting the hyper-pop and experimental pop scenes at The Stud in San Francisco every third Saturday of the month. Despite starting as a locally-based monthly party, FAKE and GAY took on a life of its own and began popping up in cities nationwide. Performers and DJs are in direct conversation with the new wave of hyper-pop, ushered in by artists like Charli XCX, SOPHIE, and A.G. Cook. The party attracts legendary guests, like Quay Dash, umru, and Dorian Electra, and recently hosted a DJ set from QT.

While not officially endorsed or produced by PC Music, despite inviting its star players, FAKE and GAY represents an entire demographic of people, young and old, who are fascinated by the force and weight of the hyper-pop genre. This is precisely why the party is coming to the east coast for its NYC debut at Sunnyvale on Friday, April 26, 2019 with headliner LIZ — who will be premiering new content — and a secret PC Music guest. Adam Kraft will be in attendance, and NYC guests will include Momo Shade, Zenobia, Serena Tea, Dicap, and P_A_T.

PAPER caught up Adam Kraft about the party's origins and favorite FAKE and GAY moments. Tickets for the 18+ event on April 26 at Sunnyvale can be purchased here.

How did the party first come about?

FAKE and GAY, as any club night I've started, began as a reaction to the club scene around me. Any time I've started some kind of club night or event it's because I have something in mind that I would want to go to that doesn't already exist around me. I wanted to create something new and exciting that was different from the bookings that hopped around from party to party every few months, somewhere people would feel free lose their mind, jump around, and scream along to lyrics, and somewhere that everyone would feel welcome and represented.

The name FAKE and GAY stems from an old internet meme as a reaction to the inauthenticity of something posted online. Like, if people saw something dubious or it looked photoshopped, they'd reply "FAKE and GAY." In this case it works perfectly because queerness has also become trendy and buzz worthy, and I've noticed a lot of organizations or events claiming to be "queer" and "all inclusive" with no real representation outside of one particular image — most commonly cis male gay culture.

So I wanted to do the opposite. I don't really think of FAKE and GAY as a gay party, I think of it more as taking certain elements you might expect to see at a typical gay party, but heightening and amplifying them, or parodying them, and also giving more space to femme presence, whatever that may look like. I think you can see the actions and bookings on behalf of the party speak louder than the silly ironic name.

The artists and DJs you have perform at the party all participate in a similar sound scene of hyper-pop/experimental pop. Why?

I think it's the freshest and most exciting thing right now. I remember hearing SOPHIE's "Bipp" clicking through on Soundcloud when it first was released on Numbers and thinking what the hell is this? Is it good? I can't tell. But I couldn't stop listening. After that I think I went a bit darker with deconstructed club music, but that got repetitive and I got burned out really fast. Then after having DJed with what I like to call, but not limited to, "hyper-pop" artists like SOPHIE, A.G. Cook, and Henrik the Artist within a few months, I developed a strong appreciation and affinity for that hyper-pop sound, which in turn helped me break down the resistance I had toward pop music in general for so long.

After developing this new obsession, I saw there wasn't really anywhere featuring it. You could find house and techno anywhere you went and I sought to create a space highlighting that sound since I felt nightlife began to take itself too seriously. I wanted to counteract that by including outstanding recognizable pop music in a setting where you would not normally think to go to hear that kind of stuff. While mashing more experimental "pop" with stuff you'd hear on the radio, my goal as a music selector is to make people question what pop means, and what are the barriers or boundaries, if any? The more I play with that idea the more I realize in a certain context it can be nearly anything.

Are all of the Fake and Gay events 18+, like the event at Brooklyn's Sunnyvale on April 26?

This will be the first 18+ party, which I'm excited about. I have gotten so many messages from music fans under 21 who just want to go out and experience their favorite artists in a live setting, but can't because far too often an event's success is dependent on alcohol sales. I wish this weren't the case, but I'm happy to have found Sunnyvale and to make this kind of music more accessible.

"I think of [FAKE and GAY] more as taking elements you might expect to see at a typical gay party, but heightening and amplifying them."

You recently brought the party to Seattle, and now New York. Are you planning a global expansion?

I hope so! I would love to build something strong enough that allows me to bring more performers and artists to places maybe they wouldn't normally have the opportunity to go. Might have a few things coming up in other cities.

What are a few of your favorite moments or memories from the parties?

Any time Nicki Jizz hits the stage is an uproar. Especially during our Bubblegum Bass Battle lip sync tournament — her lip syncing against Vanilla Carter to Charli XCX's "Vroom Vroom" was jaw-droppingly spectacular. Everyone's mouths were agape in disbelief. If that was on Drag Race it would probably be in one of those top best lip syncs of all time lists. You can watch the battles on vimeo.com/fakeandgayinc. Other crazy favorite moments were beautiful perfectly timed mistakes. During the Pop 2 tribute as soon as Frida Mont was about to start her part as Pabllo Vittar in "I Got It" on the opposing stage in the back all the lights went out! I was in the lighting booth freaking out and screaming "HELP!" but I think I everyone just thought it was like a positive "YASSSSS!" kind of scream. Everyone without hesitation pulled out their phones and lit her and then back to the other stage for the rest of the song. It made for such a dramatic moment. The lights miraculously came back on before "Femmebot" started.

Another perfect mistake was after QT finished DJing, I went back on to DJ and played "Immaterial" by SOPHIE. Right before the first chorus dropped the mixer died, but again everyone thought it was intentional, so the whole room started shouting "IM-MA, MA-MATERIAL" and continued throughout the chorus and maybe into the verse. I was screaming, "HELP," naturally, and again everyone thought it was an encouraging "YAS" scream. Eventually after everyone realized what happened, I played the song off an iPod or something, and once the mixer switched out played it again on the CDJ. It was a hilarious mess and really fun, which is actually a fair description of the party itself.