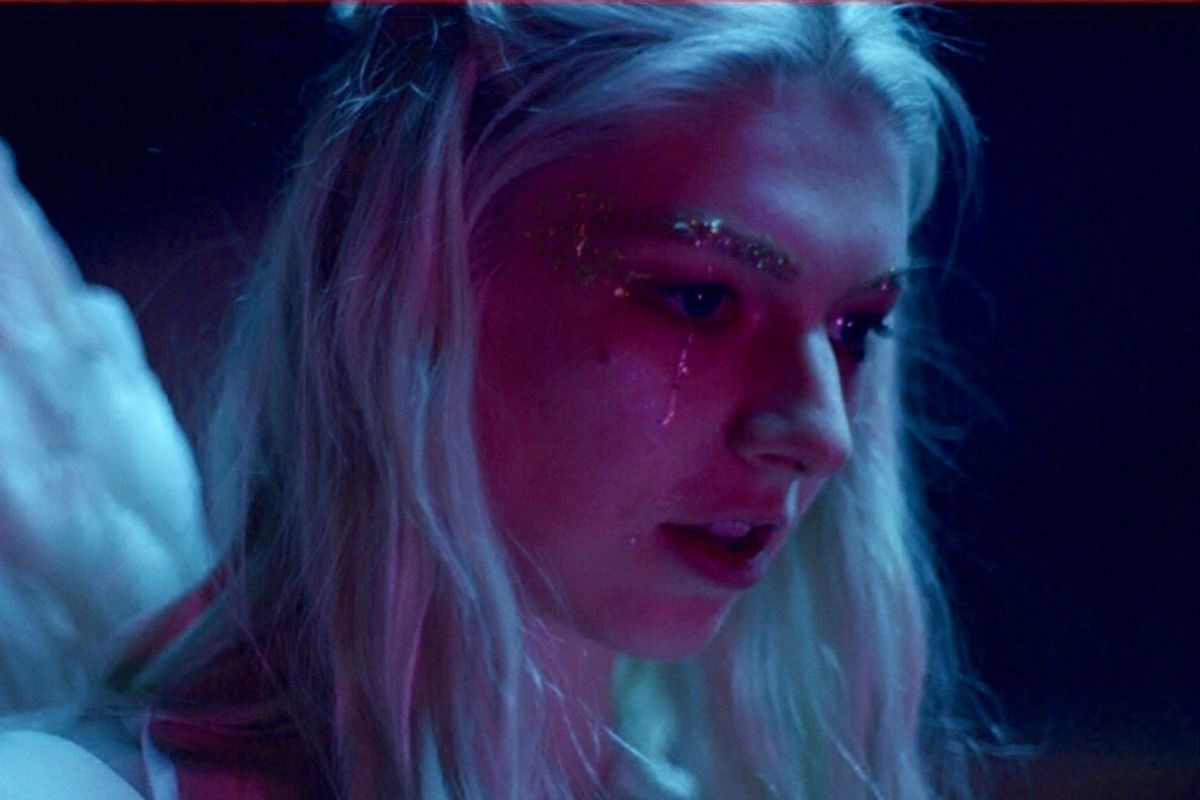 'Euphoria' Makeup Artist on the Most Challenging Looks of Her Career

Euphoria, HBO's latest teen drama, has hit the world like a storm tapping every pulsing Gen Z nerve in sight. On one hand, the controversial series has garnered intense praise for its undeniably authentic depiction of teenage life in American suburbia today, but then there are those who have criticized it for its often triggering content, from drugs to sex and addicition.

While Zendaya, as the series' resident troubled teen, is seen battling drug addiction after a failed rehab stint, Schafer's Jules painfully dissects the struggles of coming to terms with your own identity as a young transgender woman.

There are multiple other storylines like that of Maddy (Alexa Demie) and Nate (Jacob Elordi), which are equally captivating and reflect a number of relevant issues.

But even within its often blatant ways of addressing a subject, the majority of the creative genius of the show lies in the details.

The talent behind bringing these details to the surface is the show's coveted makeup artist Doniella Davy, who is tasked with the quite impossible job of translating the inner monologues of its characters into the swipe of a brush or the color of a lipstick.

You may have noticed it at first in Euphoria's mesmerizing promo images, featuring a heavily intoxicated Rue with a single tear across her cheek and an intricately placed cluster of glitter smeared across her eyes and cheekbones.

Then there is Ferreira's Kat, whose transition from the doe-eyed insecure girl next door to bad bitch cam girl is also reflective most visibly in her deep dark eyeliner and red lipstick.

But the mega successful makeup artist, who has films such as Moonlight and If Beale Street Could Talk under her name, says that Euphoria, was her most "challenging" project yet.

"Staying inspired was an issue sometimes, especially during the height of my exhaustion," Davy tells PAPER." My brain would go numb with all the makeup looks I was looking at and drawing inspiration from (on Instagram) to the point where nothing I looked at felt cool anymore. I had to keep my creative brain thriving. But as a department head, I also have to constantly think about the logistical costs for behind-the-scenes side of everything. This includes scheduling appointments for actors, or fittings for fake braces (or a fake penis, let's be honest!)"

Of course, there were creative challenges that stretched beyond fake penises, more specifically in terms of crafting looks that were both beautiful and conscious of the character's specific arc.

"Makeup represents not only who we are, but also who we feel like being on any given day, who we need to be that day for our own emotional survival, or who we aspire to be," she says. "This notion gives makeup, in general, this fantastical quality. I think you see this a lot in Alexa and Barbie's looks — makeup as protective armor, but also as a way to raise their self-worth and present superhero versions of themselves."

On Euphoria, makeup takes on a life of its on, functioning as an additional character of sorts. In talking to PAPER, Davy breaks down how exactly she conceived the pivoted looks, the process, and the inspiration.

How did you get involved with Euphoria?

I designed the makeup for a film called Under The Silver Lake, starring Andrew Garfield, and directed by David Robert Mitchell (It Follows, The Myth of the American Sleepover). The film was put out by the amazing A24, who are also very much responsible for bringing Euphoria to life, along with HBO. Based on my work on Under The Silver Lake, A24 brought me in to interview with the Euphoria writer/showrunner/director Sam Levinson and the director of the pilot, Augustine Frizzell.

How did you visualize the characters' personalities through makeup?

Makeup represents not only who we (also the Euphoria characters) are, but also who we feel like being on any given day, who we need to be that day for our own emotional survival, or who we aspire to be. This notion gives makeup, in general, this fantastical quality. I think you see this a lot in Alexa and Barbie's looks — makeup as protective armor, but also as a way to raise their self worth and present superhero versions of themselves.

During the bedroom fort scene in episode two, Jules' glitter-covered face and Rue's glitter tears are meant to be hallucinated versions of both girls, that are imagined by each other. In other words, in the "reality" within the show, Jules didn't actually have glitter on her face, and Rue wasn't really crying gold glitter tears nor did she put gold glitter tears on her face. They were just on drugs.

This is the moment where "drugs are really cool," and my interpretation of this scene is what Euphoria literally is. This is the feeling Rue has been waiting for her whole life, so I wanted to have a visual representation of her "Euphoria," before the camera cuts to Rue's overdose.

What were the most challenging aspects of your work for Euphoria?

Euphoria was the most challenging project I've ever worked on, along with the biggest budget, highest stakes and longest schedule. It was only my second time working on a TV show. Designing all the characters' looks, to have growth and evolution, and then keeping track of all these looks while filming multiple episodes at once was a real brain scramble.

Staying inspired was an issue sometimes, especially during the height of my exhaustion. My brain would go numb with all the makeup looks I was looking at and drawing inspiration from (on Instagram) to the point where nothing I looked at felt cool anymore. I had to keep my creative brain thriving. But as a department head I also have to constantly think about the logistical costs for behind-the-scenes side of everything.

This includes scheduling appointments for actors, and fittings for fake braces (or a fake penis, let's be honest!), doing accounting work to stay within my department's budget, making continuity breakdowns, coming up with daily plans for my team to be able to get everyone ready in time the following morning, ordering supplies, and trouble shooting random things like how to make Zendaya and Hunter look like they are getting lip tattoos.

It's a juggling act. I'm a tired but happy clown, and I work for a crazy circus that is eight months long. But I do it because I love being a part of telling meaningful stories. The support I've been getting, and the recognition that the work has landed and served its purpose for the story makes it all worth it.

Was creating the looks more of a collaborative process with Sam? Did he come to you with an idea or vision in mind?

Sam and I had a common goal from the beginning: for the makeup in Euphoria to inspire self-expression in its audience, and help propel the various storylines forward.

Sometimes Sam came to me with ideas in mind, which would serve as starting points, but mostly he encouraged me to do whatever I wanted as long as it didn't involve squiggly lines. He trusted me to deliver his vision, and he was a diehard supporter of me bringing my own visions to life as well. Sam's writing, directing and his sincere disposition are incredibly inspiring, and his passion for makeup put the pep in my step to reach beyond what I was familiar with.

There was also a different collaborative process with the cast and within my makeup team. Initially, everything came from Sam because he wrote the characters. Then the responsibility was put in my hands to design it all and lay the foundation for my team to be able to help me deliver it. I assembled mood boards for each character and talked to each actress to see if they have anything to bring to the table. If they do, and if I like the idea, it absolutely gets incorporated into my designs. I provide pictures and sketches to my team, who then puts their own unique spins and finishing touches on the looks that they apply. This is where the magic happens!

Kat's transformation in the series is especially pivotal since it's primarily expressed through her clothes and makeup. What was the idea behind that?

Yes, Kat has the most literal character arc, as we see her go from a self-conscious fan-fiction-writing virgin to a body-confident and hyper-sexualized version of herself. After she blackmails the McKay twins into buying her shit-loads of makeup, she starts experimenting with new looks. She tries everything from classic red lip gloss and smokey eyes, to black lipliner and glittery upside down crosses. Kat's glam is about challenging all things precious and pretty, and redefining herself as the badass, unapologetic girl that she aims to be. With her slightly more delicate looks in episode seven and eight, I wanted to remind the audience that although she's been repping KittenKween on the outside, she is still the vulnerable and sweet Kat on the inside.

What are some beauty products you used across various looks?

There are so many brands and products that my team used, because there were literally hundreds of looks, and none of them were exactly the same.

Lastly, how does the makeup evolve throughout the season?

The makeup is a constant reflection of what the characters are going through. Jules' looks have functioned like a mood ring throughout the whole season, starting with more optimism, and ending in a much darker state. Rue's makeup is absolutely manic, wherein she either has polished skin with glittery eyes or looks like she hasn't washed her face in days.