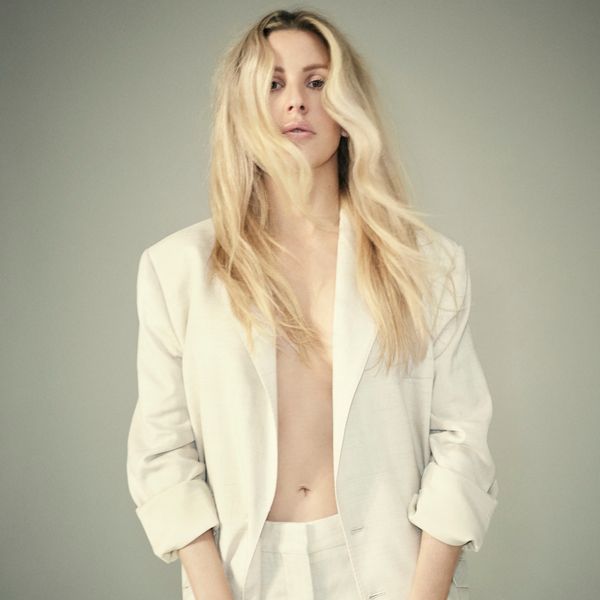 Ellie Goulding never thought she'd release a song called "Hate Me." On her moody, masochistic, tongue-in-cheek new collaboration with Juice WRLD, the ethereal British pop singer gets a little bit petty. With a dirty glint on her eye, she dares an ex to say all the mean, ugly things broken-hearted people say to each other. "Erase me, 'rase me/ wish you never dated me/ Lies, tell me lies, baby/ Tell me how you hate me," she sings, riding a huge meat cleaver emoji and attempting a voodoo ritual involving an iPhone. More in line with his persona, Juice World puffs a cigar, and invites in his dejected, wheezing, punching flow: "Tell me how I'm trash and you could easily replace me/ Tell me that I'm strung out, wasted on the daily."

It's a sharp pivot from the artist who brought us shimmering, euphoric synth-pop injections like "Burn," "Anything Could Happen," and, more recently, "Sixteen," which tenderly explore youth, adventure and heartbreak.

But right now, that's just Goulding's vibe. "Hate Me" follows up another unlikely collab, with Diplo and Swae Lee called "Close To Me." The sultry, explosive bop, featuring a devastating drop courtesy of Diplo, is more in tune with the bright, frenzied Ellie Goulding sound we know and love, but it's still jarring to hear her trade verses with Swae Lee about a doomed, volatile relationship. Goulding's fluorescent soprano, however, can make anything sound epic, haunting and mysterious, so even as she spits the words "hate me, hate me" over a clubby beat, you can hear her shine through.

Goulding is enjoying the freedom of putting out songs a bit less close to her heart — and trying out new characters, topics and collaborators. However, it won't be long till we hear some excerpts from her heart and mind: she's currently putting the finishing touches on her follow-up to 2015's Delirium, which she promises, is extremely personal.

PAPER chatted with Goulding about making "non-Ellie Goulding" songs, what her new album will sound like, and being Lil Nas X's fave.

What attracted you to working with Juice WRLD?

Since the first time I heard Juice WRLD, I heard something really special in him that I don't get that very often with artists. When I hear something really new, it always excites me. This guy just got to me. So, I asked him to be on the song and he said yes! I knew he would add the right kind of vibes, the right kind of direction and emotion. I was working with a friend of mine Jason Evigan and he goes, "We've got this song that we'd really love you to sing on." When I heard it I was like, "No way this is going to be an Ellie Goulding song." Then I recorded it and changed my mind because it just worked. I was really excited about doing something that was out of my comfort zone.

"I've been doing music for such a long time — I'm in a position where I can just give it a go, try anything I want out."

What makes you say this isn't an Ellie Goulding song?

Was it fun to explore this darker, mischievous side that we don't see in your music?

I always feel like I have a dark side to my music. But I've never made a song with that tongue-in-cheek vibe, talking about someone hating me. I never envisioned myself having a song with the title "Hate Me." But, here we are, it's 2019.

Right, it's not the dark subject matter that's the pivot, it's the attitude

Right. I've had so many people say, "I can really relate to this song," saying, "My ex has given me so much shit even though he broke up with me." Breaking up with people is never easy and it's never smooth-sailing and it's never not complicated. You can write a million love songs, a million sad break-up songs, but sometimes you just have to hit it where it hurts. Unfortunately, "Hate Me" is a very relatable song to so many people who've have suffered these relationships where everything goes wrong. I think it's cathartic to have a tongue-in-cheek song or video like "Hate Me." It's dark, but it's also like it's over get over it.

Was the song like playing a character for you? You write all your own music typically.

Kind of — it's quite obvious they're not my lyrics. Jason asked me to try the song out, and then suddenly I actually felt like myself singing this song. Occasionally there will be a song you didn't like, but it feels good to sing anyway. And you can do it freely, because you don't have any preoccupations with the lyrics because obviously you didn't write them, so you feel this freedom to be an actor and act the song out a bit more. Because my new album is all about me and I wrote them all, it's kind of nice to have a break.

Tell me about the video concept. It feels like it's about relationships specifically in 2019.

Yeah, I wanted to be transparent about the things I'm singing about, which is the external factors, things like social media that can inadvertently break people up. It's just madness the effect that Instagram can have on people. I know relationships that have been broken up purely because of social media, it is crazy. In some ways, the video is just silly — I'm riding on this giant meat cleaver Emoji — I think I needed to do that. I needed to do this thing where I wasn't taking myself too seriously. Break-ups are terrible, but I wanted to show you that you can have some fun with it at some point. I had so much fun making it with Juice WRLD. He was actually there, which was nice, since some people shoot videos separately. We both really loved the idea of something surreal and silly.

"You can write a million love songs, a million break-up songs, but sometimes you just have to hit it where it hurts."

Do you think love and relationships are more difficult in the digital age?

That's not necessarily my experience. It's definitely come into my current relationship (which is the relationship, the person I'm going to marry). But, I think it came too late to affect me. In my relationships before Caspar, my fiancé, Instagram wasn't really a thing. But I love to listen to a story and observe things, and I know people are really affected by Instagram. It's definitely a new age of... I don't know how to explain it... jealousy and turmoil. A different kind of feeling, of competing with other people. The competition and comparison have just added this new dimension in relationships.

You're lucky you found your partner before that took over.

I mean Caspar barely pays attention to social media, and he's very private, so I don't think it would ever have been a factor with him anyway. But, I know for sure that it has affected people's relationships, people around me, family, friends. Yeah, it's not good.

You've been dropping a ton of singles lately, like "Hate Me" and "Close To Me" with really different vibes. I'm curious if there's one you feel is setting the tone most for the new album?

Have you heard "Flux"?

I'd say "Flux" is the closest thing to what the album will sound like. The album is written entirely by me and it's my interpretation of a pop record. It's in keeping with how I use my voice and howI use my voice. I've always used my voice as the central focus in everything I do. I follow my voice — everything comes after that. I don't want things to distract too much from my voice and what it does, because it's very important to me. But, it's kind of my interpretation of a pop record and pop sounds.

Got it. So these other singles are fun experiments, on the side of this big project you're working on?

I'm releasing these songs because I can, and because I can always put in a signature sound using my voice. I think that's a cool thing to do and a really good tool to have in this day and age when everything is kind of plastered and similar. I haven't finalized my album, but everything I do is for a reason, and I'm not ready to put my new album out there yet. I want to release it at a certain time, in a certain frame of mind. Right now, I'm not in the mood to release things that my heart is overwhelmingly in love with. I'd never release a song I didn't feel for, but it's different to release music you write, that you're really connected to.

I saw in a recent interview you called Delirium your least personal album ever. Will the new album be a shift from that?

It most certainly will be. It's a very powerful album. It's written about my experiences over the past two years. It reflects on my career and this fucking mad chaos world we're living in. It goes there, it goes really deep. I sing about becoming a woman and independence and finding a lot of love for myself, apart from disconnected from having a partner or needing someone...

You recently met Lil Nas X (after he Tweeted about you and Capitol FM Radio brought you into his interview). What was that like?

Amazing! I love him and I'm very excited for him and his work. He's a lovely person. I love it when a song like that comes out of nowhere and has this phenomenal success. I love that stuff. It was lovely to meet him recently and I wish him every success, he deserves it.

Aside from Lil Nas X, who else in the pop landscape is exciting you right now?

Who am I listening to today? I like Rosalía, I'm into James Bay, I'm into Khalid, but who isn't? I love this girl Weyes Blood, she's amazing. I also listen to a lot of classical music.

You've said that you're also working on a classical side project right now. Could you tell us a little bit more about that?

I just love classical music, so it's a classical record inspired by the composers I love, and all the composers who have made mostly contemporary work. It's just my voice, on songs me and my friends have composed together.