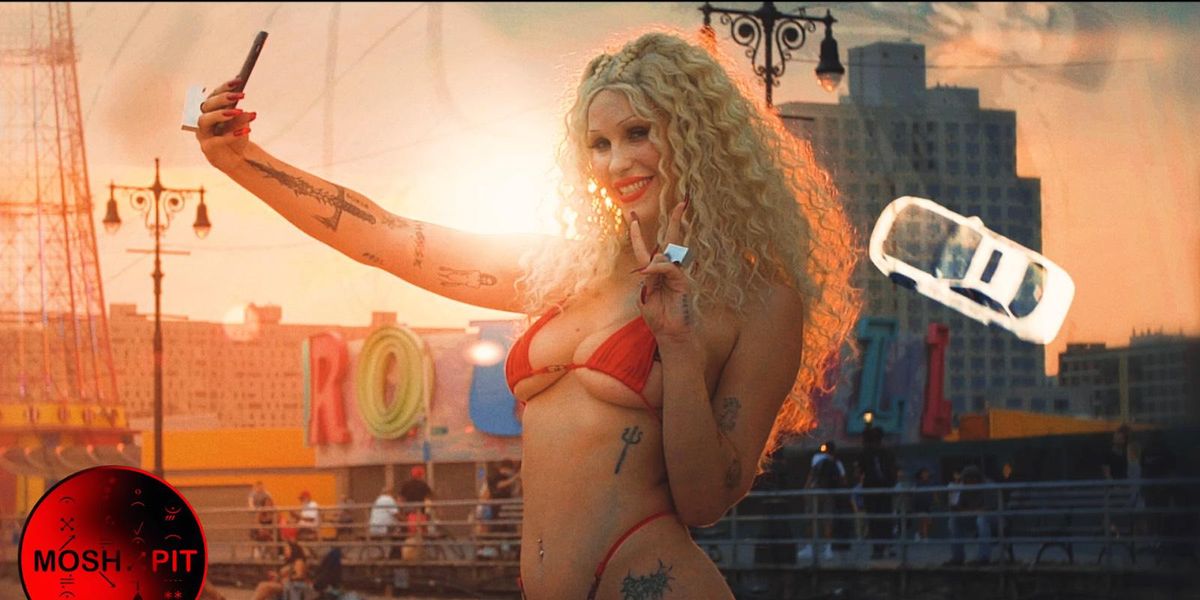 "GTA via dick, lipstick on the joystick," sings Eartheater in her new collaboration with NYC producer Tony Seltzer, outlining a fantasy where the artist gives such good road head that she commits grand theft auto and causes an inevitable car accident. Aptly titled "Joyride," it's the lead single off Seltzer's forthcoming mixtape, Hey Tony, out September 10th — a solo project that still rallies together tons of artists, from Wiki to Lucki and Hook.

In the "Joyride" music video, out today, Eartheater is joined by Lourdes Leon as Grand Theft Auto girls, mimicking the stiff movements of the iconic video game characters. Sports cars do donuts as the two work through sexy choreography, and Eartheater seduces the camera in a colorful car wash before eventually crashing into someone on the street with her man — and victim — behind the wheel.

Watch the "Joyride" visual, below, and learn more about Tony Seltzer's instantly iconic collaboration with Eartheater, which puts her signature siren vocals against his hard-hitting electronic production.

How'd you two connect to create this track?

Eartheater: I first met Tony when we were both recording with Show Me the Body on their album Corpus I in 2017. He and I got tight when we made "Spill the Milk" and "Lick My Tears" for my album Trinity in 2019. Our creative process is always so smooth. We set up a session and I showed up with the vocals already recorded. I wrote the song in probably like 20 mins the night before. Zach (Inef Coupe), Tony and I fleshed out the beat in one short sitting — and bada boom bada bang, that was it.

Tony Seltzer: Once I got the idea of doing a solo "producer" project with a variety of artists, I knew I needed to have Eartheater on there. Though we've only made a few songs together before this one, those are some of my favorite songs I've ever made. For the beat, I collaborated with my friend Inef Coupe, who made the melodic pattern. Once we started forming the beat around his melody, it was evident it would be perfect for Eartheater. I sent her the beat as soon as we bounced it. When she came to my studio a few weeks later, she already had the entire song recorded, all lyrics and vocal layers already fleshed out. The overall process was very fast — it came together like magic.

What was it like filming this video alongside Lourdes Leon?

Eartheater: Lola reached out to me months ago about working together on choreo, so I didn't hesitate to hit her up when I got the idea of using GTA movement for the video. I knew she'd be perfect and she was. It was really refreshing to have someone to work with on movement stuff. I usually just wing that shit on my own. Her feedback is really poignant, but mostly we just vibe. Nothing was particularly memorable from the shoot — it was chill — just us doing our silly dance with four cars drifting around us and the cops pulling up and the cars booking it and starting a chase. No big deal.

Tony: Eartheater and Lola are good friends, and had been meaning to work together in a creative capacity, so when she showed her the song I think it became evident that this would be the perfect video for Lola to choreograph and star in. Using the GTA style as influence, Lola's choreo really took the feel of the video to a new height.

Eartheater, you play a GTA character so well. What'd you do in preparation for the role?

Eartheater: Lola and I rehearsed — rolled around on the floor, drank rosè,and listened to the song 10,000 times at the dance studio — a couple times and I played a bunch of GTA at my friend Sammy's house before to prep. But it's important to know the song isn't about the video game — it's about a hypothetical game one plays in reality where you give such good road head that you inadvertently commit grand theft auto via dick and the goal is to get the guy to crash his car. The video game was just an aesthetic treatment. I've always loved the way GTA looked.

Tony: Since Eartheater already had all the lyrics written and vocals recorded when she brought me her portion of the song, GTA was an obvious theme for the video. Even while the song was still in the works, she was coming up with ideas for the video. After we decided we definitely needed a video for the track, Eartheater wrote up a treatment that we then brought to my friend Moshpit, whose style I knew would fit perfectly with the GTA video game feel

This is the lead single and video from your next mixtape, Tony. How is it a strong first statement on what's to come?

Tony: The majority of artists on this project are rappers, all with very different sounds, but my production is the constant that pulls it all together. "Joyride" obviously sticks out from the rest of the project because of Eartheater's unique style, but also the almost manic speed at which the song intensifies. I hoped that by throwing a curveball for the first single, it would draw in people who may not have been fans previously, and then open them up to my world.