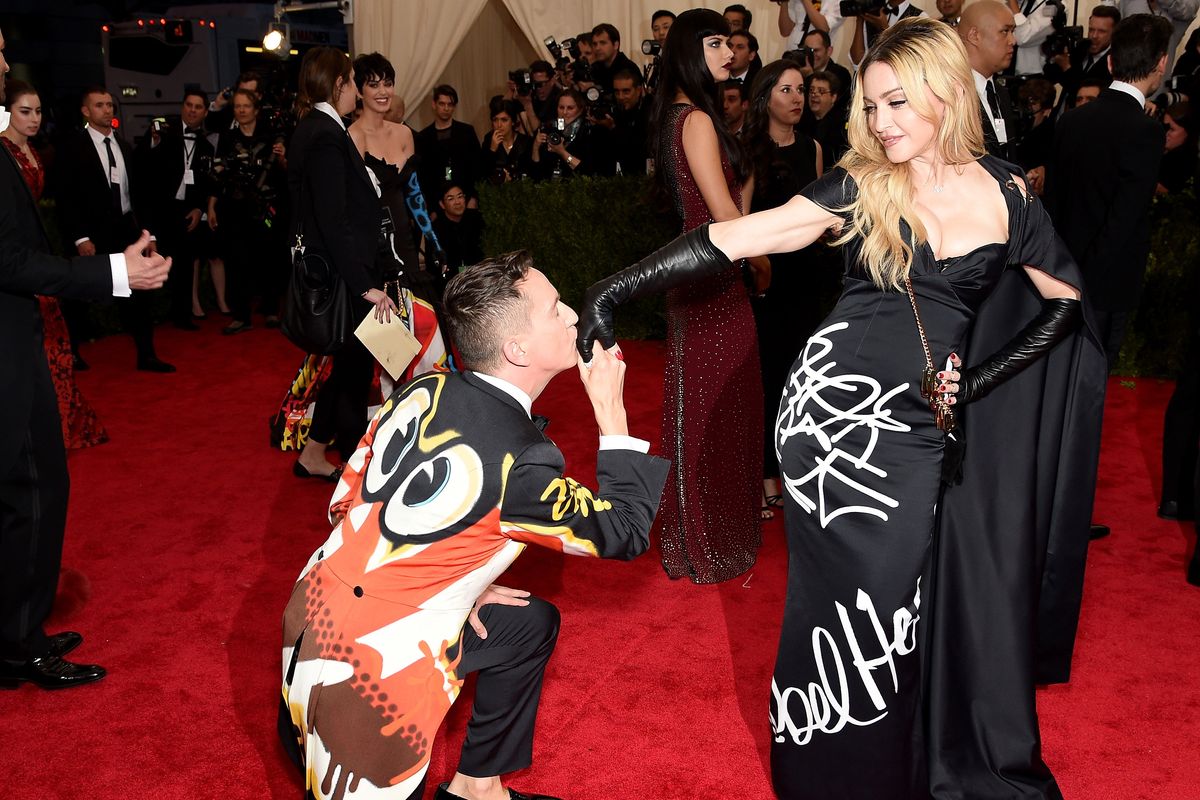 It's the first Monday in May, a time in New York when the city usually comes alive with celebrities, designers, screaming fans, security detail and black cars all tracing the streets around the Metropolitan Museum of Art for the annual Met Gala. (No crowds in sight outside the Carlyle and Mark hotels this time around.) But since this year's festivities have been postponed due to the pandemic, designers are looking back at Met Galas from past years and posting their favorite memories on Instagram.

From Olivier Rousteing's after-party-turned-music video to Riccardo Tisci's numerous Beyoncé moments, here are some of the biggest highlights.

Brandon Maxwell on Instagram: “New YouTube! Link in Bio We have another special new video coming today at 3pm, so make sure to check back! We wanted to first share this…”

Stylist-turned-designer Brandon Maxwell has had a long and fruitful relationship with Lady Gaga, who wore (and changed out of) his multiple designs for last year's "Camp" red carpet. He took to Instagram to share a never-before-scene clip of himself taken by his fiancé as he walked hand-in-hand with Gaga to the event.

He also released a new YouTube video of that moment that where Gaga takes her first steps walking in the streets of New York toward the museum. "My fiancé filmed this, and I'll never ever forget looking up at him as we approached the carpet and seeing a tear fall down his face from pride," he wrote. "It remains one of my most treasured memories."

The Moschino creative director has escorted some of the biggest names in music to the yearly fête, including Katy Perry and Gwen Stefani. He not only dressed Cardi B for her first Met Gala (in a custom pearl-embellished look for the "Catholic Imagination" exhibit) but got to walk with his idol Madonna in 2015 for "China: Through the Looking Glass" in a caped Moschino number inspired by the brand's graffiti-tinged Fall 2015 collection.

Scott shared a tidbit from the time Madonna went as his date a few years later in 2017, describing the moment where the two were making a music video inside a giant video booth at the museum. "I just remember turning to her saying, "You know, that was one my biggest highlights of my life, just getting to dance with you," he told Vogue.

Alexander Wang has attended the Met Gala on numerous occasions including during his stint designing for Balenciaga, where he dressed Lady Gaga in a dramatic caped dress with billowing sleeves. He's also accompanied a sultry Bella Hadid in a fitted catsuit (2017) and Hailey Bieber last year in a blush pink backless gown with exposed thong.

For the latter, the designer arrived in what could only be explained as business-up-top and party at the bottom. He paired his white shirt and black blazer with some tiny sparkly shorts and chunky sneakers, serving all kinds of Zoom "waist-up" energy. "We're upcycling in 2020," he captioned a WFH meme of the look, as well as "Social distancing but make it Met" post of Hadid and Zoe Kravitz hugging a giant ball.

Balmain's Olivier Rousteing also posted a series of flashbacks from past Met Galas on Instagram, including 2015's outing with Justin Bieber and the following year where he dressed Kanye West and Kim Kardashian in his signature glitzy armor and metallic embellishments. (The "Manus x Machina" theme seemed tailor-made for Rousteing.)

The designer shared a heartfelt thank you to West after reminiscing about the time Balmain hosted a Met Gala after-party at the Gilded Lily in 2016. This is where West filmed his music video for "Wolves," which was directed by Steven Klein and saw Kim, Jourdan Dunn, Joan Smalls and Alessandra Ambrosio all dressed in Balmain looks worn earlier at the Gala. It also served as the campaign Rousteing's Fall 2016 collection.

"This was during the MET," he wrote. "I can not thank you enough Kanye for this moment... This was a moment of my career I will always remember and so so so proud."

Burberry's chief creative officer has had a long history with the Met Gala, having attended on numerous occasions during his successful stint at Givenchy. Some of the most memorable and impactful images to come out of the red carpet are because of Tisci's designs, including a heavily pregnant Kim Kardashian dressed in a head-to-toe floral print gown that launched a thousand memes and some dazzling nude dresses worn by Beyoncé.

These are just some of the moments the designer shared on Instagram, which also include the times he went with Rooney Mara, Liv Tyler and Madonna. He most recently dressed Ezra Miller in that surreal Burberry look with optical illusion eyeballs.

"In these unthinkable times, I have loved going through these memories, reminding myself of so many unforgettable moments at The MET on this first Monday in May," he wrote. "I cannot wait and am so excited thinking about how amazing it will be to create new and heavenly ones again."

While some of Marc Jacobs' biggest fashion moments at the Met Gala came from the time he dressed Lizzo (2019) and Janelle Monáe (2018), he's perhaps most find of the time he attended as honorary chair in 2009 for "The Model As Muse," where he brought Kate Moss in a draped champagne number as his date. "It doesn't get much better than this," he posted.

Proenza Schouler designers Jack McCollough and Lazaro Hernandez have taken an eclectic mix of artists and actors with them as dates to the Met Gala throughout the years (Grimes, Laura Dern and Brie Larson among them). Their signature downtown-meets-uptown aesthetic and contemporary art influences have made for some of the most compelling red carpet moments in the museum's history.

Last year's "Camp" theme saw the duo dress model and singer Karen Elson, who looked striking in a sequined cut-out dress and big red hair. (The Proenza boys have alternated between bowties and neckties while dressed in pristine black suits.)