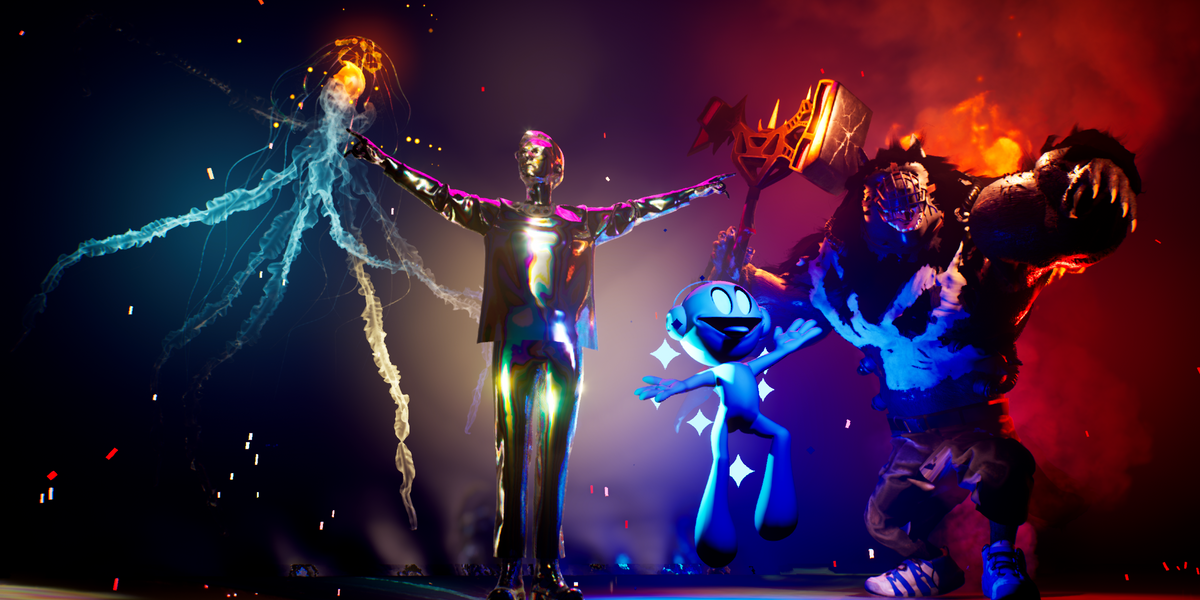 Legends have foretold of a mystical rave oasis that existed at the precipice between reality and a transcendent utopia. Rising up from the horizon, a towering structure clad in LEDs and flanked by spotlights there stood a club where it was said that the music played 24/7 and the vibes were always just right.

Within its walls laid four great DJs: A blue headphone-adorned man that bounced off every conceivable surface and spit blisteringly fast bars, a ferocious muzzled hellhound that wielded a mighty hammer and left a perpetual trail of destruction in its wake, an ethereal jellyfish-like being that radiated waves of ambient tones and sang an otherworldly siren song, and a translucent man who was said to be capable of channeling the forces of rave in their most pure and raw form.

These four denizens of the club were tasked with spreading its gospel through an eternal soundtrack that could capture the feelings and emotions of any reveler who entered its hallowed halls in the form of song. This, my friends, is Harlecore.

A love letter to rave and everything it stands for, Harlecore is the debut album from DJ and producer Danny L Harle. It's all set in the world of Club Harlecore, an immersive never-ending virtual nightclub inhabited by four resident DJs that each represent a different genre of heart-racing dance music.

There's DJ Danny, who presides over Euphoria Stadium and plays uplifting hardcore; MC Boing, who can be found ricocheting off the walls of the Bounce Room and ecstatically rapping over Mákina; DJ Mayhem, who can quite literally tear down the walls of Mayhem's Dungeon with an aggressive strain of gabber; and DJ Ocean, at the other end of that spectrum, who soothes and enchants with her ambient soundscapes atop Ocean's Floor.

Together, all four characters come to embody the high energy sounds and emotional extremes that make up the world of Harlecore.

Harlecore originated from a series of parties under the same name the producer had thrown over the past decade in London, New York, LA and cities across Europe. One of the original core members of PC Music, Danny L Harle had made a name for himself producing for the likes of Charli XCX, Rina Sawayama, Clairo, Carly Rae Jepsen and more, incorporating his classical background to create glossy, impeccable pop. And while Club Harlecore parties didn't exist entirely separate from his other work, they served as an outlet for Harle to indulge in his love of these genres and bring collaborators like Caroline Polachek and Hudson Mohawke into the fold.

However, it's important to make the distinction that Club Harlecore doesn't try to be a recreation of these parties but rather an entirely new, overall heightened experience.

From the album's outset, Harle locks listeners in an endless upward trajectory towards higher and higher levels of euphoria. As DJ Danny, Harle emulates the raver girl pop of artists like Cascada and DJ Sammy on tracks like "Where Are You Now," "Do You Remember" and "Take My Heart," where he crafts intricate melodies and soaring vocals into massive sky-touching anthems.

Teaming up with Hudson Mohawke as DJ Mayhem, Harle unleashes his inner gabber beast for some of the album's hardest speaker knocking bangers like the devilish "Interlocked" or the ruthlessly pounding "All Night," tapping into a cathartic rage that makes you want to put your fist through a wall (but like, in a good way).

Reviving the exuberant and spring-loaded persona of MC Boing alongside Lil Data, Harle delivers some of the album's more irreverent and witty moments with bite-sized blasts of Mákina in tracks like the straightforwardly titled "Piano Song" and "Car Song." Enlisting the impressive and heavenly vocal gymnastics of Polachek, DJ Ocean provides a couple of the project's brief respites from the high octane onslaught of sound with lush expansive waves of ambient synths in "Ocean's Theme" and "For So Long."

All together, Harle manages to distill rave down to its purest emotive state and then blow it out to epic proportions. What Harle understands about the nature of rave is the way it manages to find a visceral connection to the listener and cathartic potential — a sentiment that's even echoed in one of Club Harlecore's taglines: "That music sounds the way I feel."

In a time where we've all become acutely aware of just how much we all miss going to shows, the power that dance music posses to touch and unite us cannot be overstated. Harlecore cuts right to the heart of what makes rave so special and makes sure everyone is having a good time while they're at it.

Ahead of the grand opening of Club Harlecore, PAPER caught up with Danny L Harle to get all the hot gossip about Harlecore and the nightclub's enigmatic residents.

For starters, what is "Harlecore" and how does one get to Club Harlecore?

If you follow the music that sounds the way you feel, you will find Club Harlecore. It is not a "virtual club" as it is described in the press, it is a real place that one visits in those moments of unexplainable transcendent euphoria. It exists on the event horizon between perceived reality and a kind of shared utopian dream. Harleco.re lets you into my experience of listening to rave music, I hope you find something in it that rings true for you.

How did you come to end up at Club Harlecore?

Towards the end of the European tour I realized that I should probably release this music, but I didn't feel comfortable just putting the tracks on DSPs as I felt like it wouldn't fully communicate the full experience. Luckily, I was struck by the divine light of DJ Danny and witnessed the construction of Club Harlecore.

What are all the resident DJs like? Any hot gossip?

I hear that DJ Mayhem was once a normal raver in DJ Danny's room; that DJ Danny would cease to exist if everyone left the stadium; that Boing was once a very different being altogether and that Ocean is less of a being and more of a link to another world altogether.

Walk me through what a typical night is like at the club.

The nature of a multi-room club is that you choose which room you want to visit depending on your mood, however there is a known path that some devoted ravers take:

Once a raver discovers Club Harlecore, they enter DJ Danny's room and ascend with him — as if it is just the two of them together — glimpsing the euphoric plane for a moment, before descending back down into the club.

Once grounded, they find themselves manic with an energy that requires immediate release. MC Boing is the boy for that, and so a short elevator ride leads them to his bouncy boing dome, bouncing all night. Everybody here is safe and nice, angel's singing bass is tight.

This experience leaves them satisfied but they feel something calling from the depths of the club, in the basement, in what once was a cave smashed out by a great hammer. The hammer of DJ Mayhem. The ravers descend into this fiery pit and discover the monster that dwells there, but more importantly confront the monster within themselves.

After being beaten to the edge of existence, they wake up on DJ Ocean's floor, glowing amongst the mushrooms. The healing lullaby of the cosmos sings them into a state of inner peace.

Once this state is achieved, they soon find themselves back in the crowd in DJ Danny's Stadium, ready to start the process again.

I'm not sure, but he raps about what he is. Maybe there are some clues in his lyrics:

"MC Boing is a bird that flies on the wings of a bird in the angel's eyes."
"MC Boing is bouncing all night."
"Here comes another sick banger from me, MC Boing, tonight's MC."

Is DJ Mayhem mad at me?

Yes, unimaginably so. And you are mad at yourself, too.

What music sounds the way you feel right now?

I don't think she would even if she could.

Not sure he is, tbh. I'm not sure he is anything! You can see right through him! It's almost like he is just a vessel or conduit for a divine force that unites us all together.

What do you hope people take away from their time in Club Harlecore?

This is the emotion you are looking for. That music sounds the way I feel. No one is alone at Club Harlecore.