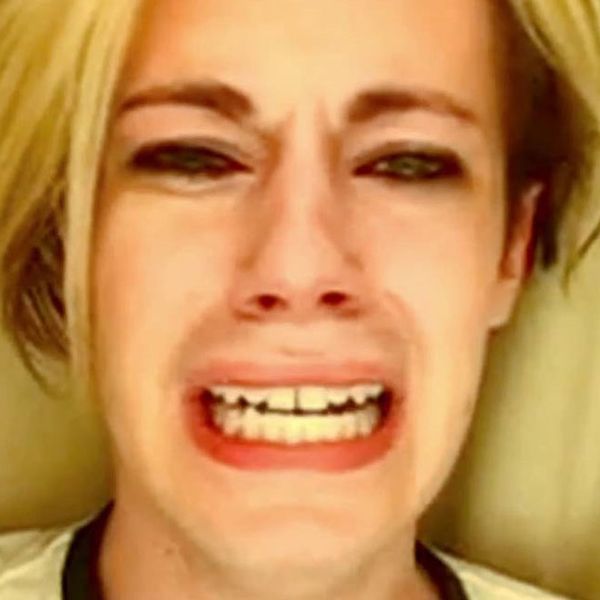 Produced by World of Wonder, the company responsible for RuPaul's Drag Race, Leave Britney Alone: Chris Crocker Goes to Hollywood is a 20 minute presentation reel that WoW shot in 2007 for a prospective television series. It is a curious, free-floating document of a moment in culture when it was still unclear how Internet fame would translate into more traditional success. The fact that nothing further in the form of a series came from this pilot speaks to the limitations of both its subject and reality television in general.

WoW has always had an eye for pop culture personalities, having produced successful documentaries on Tammy Faye Bakker (2000) and Michael Alig (1998). It's not surprising then that they got this footage of Crocker, one of the earliest YouTube stars, who gained mainstream attention in September 2007 when his video appeal on behalf of a certain beleaguered pop star went viral. By that time he already had a huge following on MySpace and YouTube for his bizarre confessional videos, which had amassed millions of views. A lonely femme raised by his grandparents in Bristol, Tennessee, Crocker flaunts his queerness throughout these videos, speaking candidly about sex and America's treatment of gays and lesbians from deep within a red state. He is also frequently insensitive, putting on characters that embody tired stereotypes of women and Black people for laughs — performances that would likely attract backlash today. But in 2007, this outrageousness drew a crowd, and WoW's cameras catch Chris as he considers a move to Los Angeles to make something bigger of his viral success.

A highlight is a brief scene early on in Bristol that shows Crocker's relationship with his mother, who had him at 14. In their conversation they sound like peers, with him cautioning her against having another kid with someone who she doesn't love. Still, she seems genuinely caring, a rare source of affection for Chris in an otherwise unkind town. "Ever since you were little you were my rock," she assures him. In an episode of his new web series on WoW Presents Plus, the studio's new streaming network, Crocker explains that his emotional reaction to the world's treatment of Britney in that famous video stemmed from seeing his own mother suffer from PTSD following military service in Iraq. This is striking not only because it adds a geopolitical dimension to the Chris Crocker saga, but because it demonstrates how diva worship for young gay boys can be tied to our relationships with the real women in our lives.

All tenderness evaporates once the show moves on to Hollywood, where Chris travels with only $500 in savings. We see him crash a Britney Blackout CD release party at the Virgin Megastore, where he basks loudly in the attention he receives from the fans present only to instigate a verbal altercation with them over who loves Britney the most. Inside he purchases 10 copies of the album: "Five for me. Five for the homeless... Because Britney is food for the soul." The clip that follows depicting him handing out these copies to real homeless people is as cringeworthy as it sounds, and highlights Crocker's discomfort transitioning from his own videos to something as produced as a reality show.

Elsewhere the video shows the limitations of Internet fame for those who are unwilling to put in the hard work to "turn friends into cash," as Crocker puts it, referring to his Myspace friend pool. The strategies for capitalizing on an online following as laid out by Mike the branding specialist, whom Crocker is filmed meeting with, have since become standard practice for thousands of people on Instagram, but they weren't so obvious in 2007. That Crocker doesn't follow Mike's advice, choosing instead to return to Tennessee, seems more to do with his being broke and overwhelmed than his being lazy. "Too many people telling me what they want and too many people with their expectations," he explains, "right now I feel like a walking talking typical LA person." Making videos from the safety of his room provided a source of escape for Crocker from bleak surroundings and circumstances. While fame is desirable to many, few would envy his suddenly having to transform a coping mechanism into a source of income to survive — how fraught.

Above all this video puts a spotlight on the flimsiness of the platforms that catapult personalities like Crocker into prominence. YouTube of course persists, but MySpace would go on to lose all relevant social currency by 2008, when Facebook surpassed it as the most popular social network. Today, having been famous on MySpace is about as valuable as having been famous in vaudeville. Crocker has nonetheless survived and maintains an audience of over a million followers between Twitter and Instagram, where he broadcasts the same kinds of videos that made him famous in the first place. Instagram today seems about as bulletproof now as MySpace did in 2007. What new platform waits in the wings to usurp its place on our home screens? Who on your feed will survive the crunch?

The scenes that follow, showing Crocker making a paid appearance at a straight club in Boston, are pretty bleak save for the presence of Nick, Crocker's ex-online boyfriend of two years whom he meets in person for the first time on camera. In addition to hearing Crocker ask questions that highlight the struggle of femme-presenting boys — "What kind of guy likes a guy like me?" — we witness affectionate moments between him and Nick that would have surely been unprecedented on television in 2007. The reality tv landscape at that time, when the most popular shows included I Love New York 1 & 2, Big Brother 8, and The Hills, was hardly a fertile ground for nuanced conversations about gender identity and queer relationships.

A more thoughtful document would arrive 5 years later in Chris Moukarbel and Valerie Veatch's excellent film Me at the Zoo (2012), which dives into the more striking aspects of Crocker's story that are only touched upon here. If nothing else, Chris Crocker Goes to Hollywood shows how reality TV, which has always prioritized nastiness and mess, would have only brought out the worst in a character as turbulent and untested as Crocker. Maybe we're all better off that we were spared a full series. Maybe it represents a missed opportunity. Regardless, Crocker's pilot captures a fascinating shift in celebrity, before today's sea of Internet-bred personas became the norm.