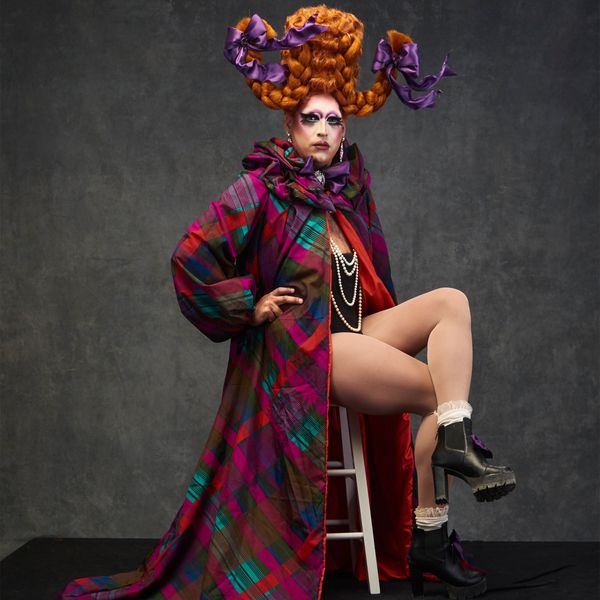 Bushwig 2019 Reminds Us Why Drag Is so Vital

As far as drag festivals go, it doesn't get much bigger than Bushwig. Heralded as the "Coachella of drag," the annual gathering of drag performers near and far has become an institution for Brooklyn's queer community, closing out the summer with one last big bash. Founded by Horrorchata and Babes Trust, the festival celebrated its eighth year with hundreds of performers including Nina West, Lady Bunny, Soju, Slayyyter, and Charlene for a weekend that embraced the messy, the loud, and the political side of queer life.

Bushwig has always prided itself as being a space dedicated to performers who's work exists on the fringes. From Sherry Poppins eating a baby to the tune of "Papa Don't Preach" to Pearl Harbor's humorous PowerPoint presentation on being a vers top, it was the kind of event where you could be watching someone lip-syncing Marianne Williamson sound bites one second and watching someone else getting fisted to a Kermit the Frog song the next. By the time the final curtain fell Sunday night, there seemed to be no taboo left that hadn't been transgressed that weekend.

Bushwig's commitment to the fringes of the field is what sets the festival apart from other mainstream representations of drag and ultimately is a major selling point for most attendees. The irony that RuPaul's DragCon NYC happened to be going on just across the river was not lost many performers. In a surprise performance, former Drag Race contestant Gia Gunn succinctly illustrated the disparity between the two events by praising the crowd for appreciating drag as an art form rather than the "clout-chasing, climb the ladder" types that were lined up for photo ops in the Javits Center across town. Even Lady Bunny couldn't help but take a couple of shots at the highly commercialized bastion of drag's mainstream presence.

For all intents and purposes, Bushwig is an underground festival that is perfectly comfortable being so if it means that they can still give a home for the unclassifiable freaks and weirdos that make queer community all the more vibrant for it. Bushwig has been a stepping stone for many breakout stars of the drag world like Sasha Velour, Aquaria, Aja, and soon-to-be-a-household name, Miss Bushwig 2019, Serena Tea.

The backbone of a community, Bushwig is an institution working to make sure that drag stays in tune with its roots. No moment hit home this point harder than Lady Quesa'dilla's reperformance of Sylvia Rivera's classic "Y'all Better Quiet Down" speech. A searing indictment of the erasure of trans people in the Gay Liberation movement, the text is an important part of queer history with a message that continues to resonate to this day. Bushwig is, and will hopefully continue to remain, a vital part of drag.