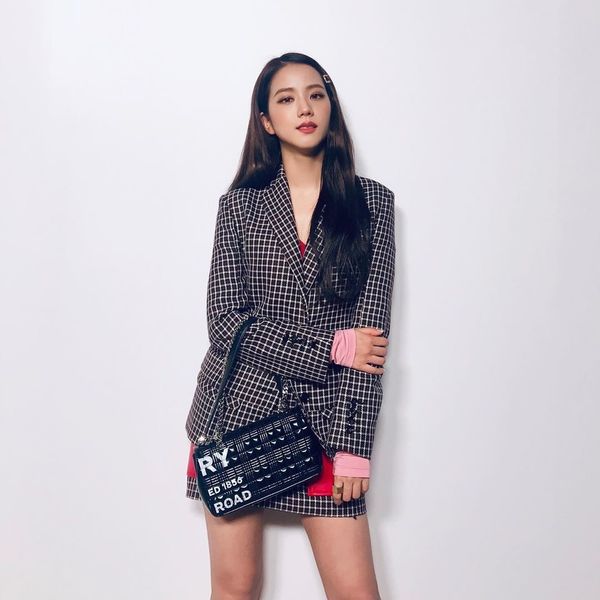 At the Burberry Spring 2020 runway show today, Jisoo made her first official appearance of fashion month this season. The BLACKPINK member and K-Pop superstar was spotted sitting front row at Burberry's Spring 2020 show alongside Dua Lipa and Anwar Hadid wearing a tartan wool jacket and matching miniskirt from their Fall 2019 collection, which she picked out the day before at its flagship store on Regent Street.

Riccardo Tisci, who presented his third mainline RTW collection for the British luxury label, had a slew of top models walk his show today, including a blonde Kendall Jenner, both Hadid sisters, longtime muse Irina Shayk, and Agyness Deyn, who last walked at London Fashion Week seven years ago. This season, Tisci titled his collection "Evolution," inspired by the Victorian era (when Burberry was founded) and a palette of white, gray and silver. Here's everything else you need to know about the collection.

Whether it was the hems of sleeves, skirts, or entire dresses, fringe made a big splash across several pieces, adding to the sense of fluidity and movement the collection headed toward this season.

Hoodies and sweatshirts were rendered in big collegiate stripes, from pink and gray numbers to graphic black and white versions.

Gray, in all its shades and hues, acted as the new neutral, which laid the groundwork for other prints and patterns to make a play this season.

The classic trench coat took on new forms for spring, including high-low cut styles and color-blocked printed versions, while traditional khaki and navy also remained in the lineup.

Plenty of lace and embroidered dresses were among the offerings here, proposing a new kind of femininity with bold Burberry logo details and unicorn typeface displayed throughout.