Britney's Dad No Longer Controls Her Life: What's Next?

There was a time when it seemed like Britney Spears was going to be okay after all. Following her well-publicized mental health breakdown in February of 2008, the popstar was placed under the temporary conservatorship of her father, Jamie Spears. Fans reluctantly accepted this as a necessary measure, assuming Britney would get better and regain control over her health and finances in future. But his didn't happen, and the conservatorship became permanent eight months later.

Britney has remained in headlines ever since, but her life has become more mysterious over time. During public appearances and on Instagram, Spears frequently appears happy and at peace. Then there are those more disturbing videos of her staring vacantly into the phone camera, or dreamily throwing back to the dance moves of her 2000s heyday. For three months of this year she disappeared from Instagram altogether, with members of the increasingly vocal #FreeBritney movement protesting that she'd been committed to a mental health facility against her will. She re-emerged in April, back to "normal."

Many of us thought Britney would never be free from her family's control, but the legal circumstances of her conservatorship have changed more over the past month than they have in ten years. Her ex Kevin Federline successfully petitioned for a restraining order preventing Jamie Spears from spending time with his grandchildren Sean and Jayden, after Jamie allegedly abused Sean. Federline then successfully filed for greater custody over the two kids, increasing his share from 50 percent to 70 percent. Now Jamie has stepped away from the conservatorship role altogether, passing his former duties to Brit's care manager, Jodi Montgomery. Note that Britney Spears is worth almost $60 million, and her conservator draws a yearly salary from this amount, as well as controlling all her other financial decisions.

Below, a timeline of the confusing events that got us here, and what's coming next.

Britney Spears on Instagram: “I don’t even know where to start with this, because this is so tough for me to say. I will not be performing my new show Domination. I’ve…”

​Las Vegas is the trigger. Britney disappears from Instagram and public life in January, after announcing the cancellation of her much-anticipated Britney Spears: Domination residency. She cites her father's ill health as an excuse, writing that she'd reluctantly chosen to "put family first." A few days later she acknowledges the 20th anniversary of ...Baby One More Time, then logs out completely.

On March 4, Britney's co-conservator, the lawyer Andrew Wallett, abruptly quits with no explanation. This leaves Jamie as the only one controlling her general life decisions, medical care, and finances.

Britney re-appears on Instagram on April 3, as though to reassure fans that she's doing okay. She cryptically says she needs some "me time," shortly before reports emerge that she's checked into a mental health facility. Sources close to the family insist she's there by choice.

Britney Spears on Instagram: “We all need to take time for a little "me time." :)”

Despite being an inpatient, on April 12 Britney is spotted out and about getting her hair done, surrounded by members of her team and looking happy. She's also seen spending time with boyfriend Sam Asghari. Fans speculate these public appearances are staged.

#FreeBritney starts going viral on April 16, when the admins of popular Britney fan account and podcast Britney's Gram receive an anonymous tip about her wellbeing. "What is happening is disturbing, to say the least," the tipster, who claims to be a paralegal with knowledge of Spears' conservatorship, tells them over voicemail. "Basically, Britney was in rehearsals for Domination. It came to Jamie's attention that Britney was not taking her medication as prescribed. She was missing a lot of doses and just full-on not taking them. So they got her to the doctor and the doctor said, 'OK, if you don't want these medications, let's get you on a new one.' She refused to take the new one. Jamie said, 'Either you take this medication or the show's off, and I'm pulling my support and you can't do it.' Britney did not follow Jamie's instructions, so he was true to his word—he pulled the show, he verbatim said, 'Blame it on my illness.' He even claimed that Britney did not willingly enter the wellness facility."

In response to allegations that Brit is being controlled against her will, fans begin to protest outside the facility where she's receiving treatment, and many demand that her father's conservatorship be re-evaluated.

A few days later, on April 23, Britney addresses the rumors head on via Instagram. She says things have "gotten out of control" and urges fans "not to believe everything you see and hear." She also discredits her controversial former manager Sam Lufti, a vocal #FreeBritney supporter.

On April 25, Spears reportedly checks out of the mental health ("wellness") facility for good.

In early May, Court documents show that Britney's mom, Lynne Spears, has asked to be looped in on her affairs. It's reported that she and Britney's sister Jamie Lynne are trying to make "heads or tails" of the conservatorship situation, and have become deeply concerned about it. Lynne is supposedly "extremely upset to see Britney in the condition she is." Fans also notice her "liking" #FreeBritney posts on social media. Adding fuel to the fire, TMZ sources say that Britney herself has joined team #FreeBritney, and informed a judge she wants the conservatorship to end. She reportedly claims to have been forced into the mental health treatment facility against her will, and corroborates the Britney's Gram source by saying her father also forced her to take psychiatric medication.

Jamie, meanwhile, files for even more control over his daughter's life. Court documents show he asked to expand the conservatorship to states other than California, giving him legal control of her affairs in Florida, Louisiana, and Hawaii. These are the three other states where Spears spends the most time away from home. A judge orders an "expert evaluation" of the conservatorship, with a report due on September 18.

Also in May, Spears files a temporary restraining order against Sam Lufti, which is granted permanently in June.

Speaking with TMZ on May 15, Spear's longtime manager Larry Rudolph clarifies what happened with her Domination tour. He says that Spears hadn't stopped taking her meds, but rather they'd "stopped working," and the stress of this combined with her father's health issues forced her to cancel the shows and put her showbiz career on indefinite hold.

June - August 2019: Trouble Behind the Scenes

For the next three months, all we see from Britney are her usual charmingly deranged Instagram posts. #FreeBritney quietens down somewhat. It seems like the storm has blown over. In July, Britney and Asghari make a rare public appearance on, of all things, the Once Upon a Time... In Hollywood premiere red carpet. They also go on vacation together. 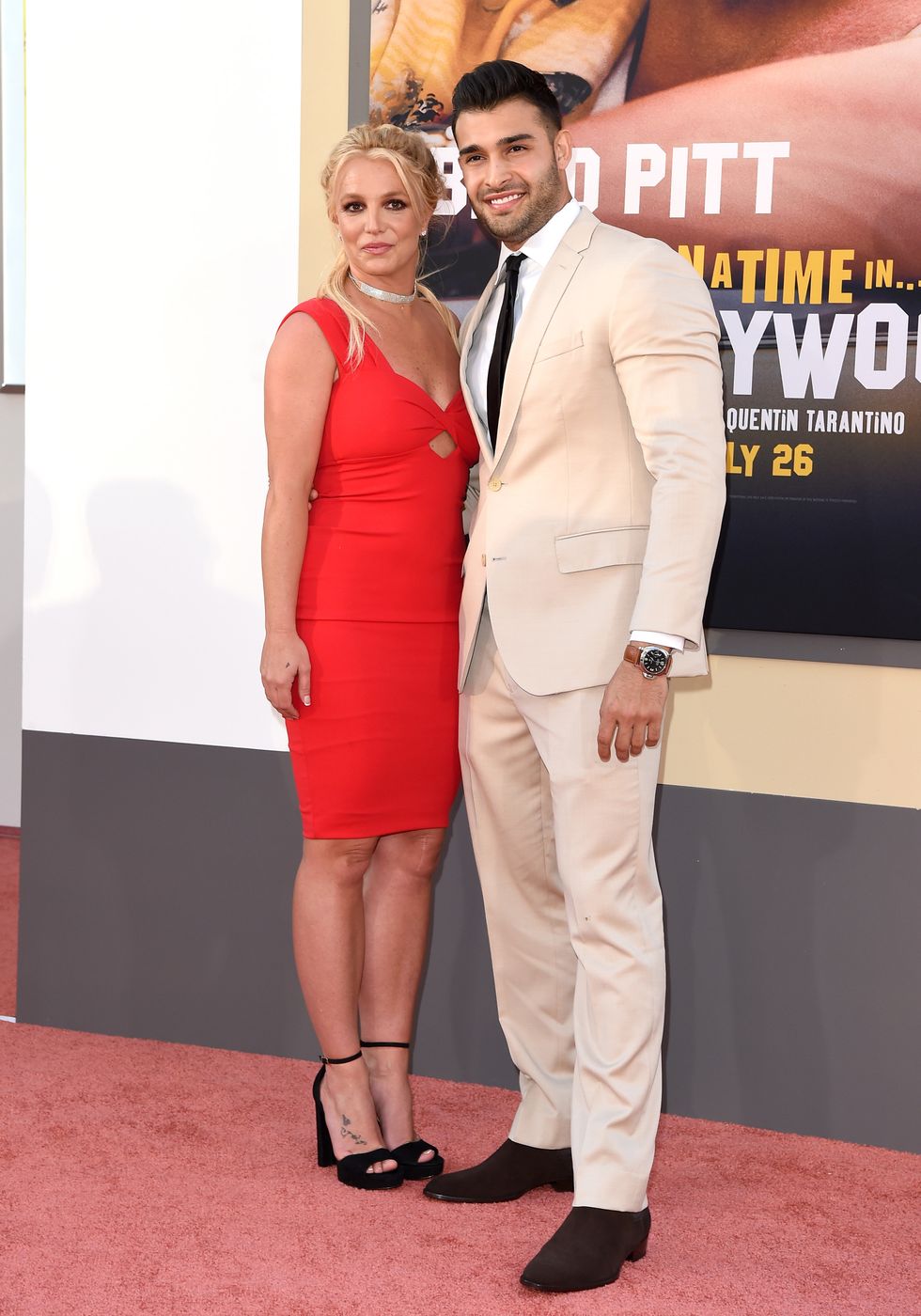 The conservatorship case rages on quietly behind the scenes, with various news outlets obtaining documents from court. On August 13, reporters obtained records of Spears' finances, which revealed her net worth of around $59 million. She spends around $400,000 annually, but her legal and conservatorship fees total about $1.1 million on top of that.

Britney Spears on Instagram: “Coolest hats ever here .. so much fun 😳😳😳😳”

On August 23, Spears' longtime medical physician Dr. Timothy Benson dies unexpectedly of an aneurysm at 48. Benson was under review as part of the revaluation of Britney's conservatorship, and the court will soon deliver a report on whether or not the treatment he administered to her was appropriate. TMZ notes that Benson was a board-certified psychiatrist, but much of his previous experience was working with professional sports players, not troubled popstars. It's possible he was underqualified for the job.

On September 3, Kevin Federline reaches a new custody agreement with Britney: instead of the former couple going 50/50 with their kids, he'll be their custodian for 70 percent of the time. This seems significant, as even during the height of Britney's mental health issues, she has been photographed spending time with her children. But it doesn't seem like the agreement was made acrimoniously.

We also learn that Federline has filed a police report and instigated a restraining order against Jamie Spears, preventing him access to both of his grandkids. Jamie allegedly got physical with Kevin and Britney's eldest child, Sean, during an argument in Spears' home.

Britney's dad relinquishes his conservatorship powers on September 9, putting her care manager of one year, Jodi Montgomery, in charge. He cites health reasons (sense a theme?), but it seems more likely that tensions around the restraining order were a factor.

Will Britney ever be free? Is Kevin Federline, of all people, going to save her from the clutches of dubious family members? The date to know is September 18 — next week. That's when the next court hearing on the status of her conservatorship begins.