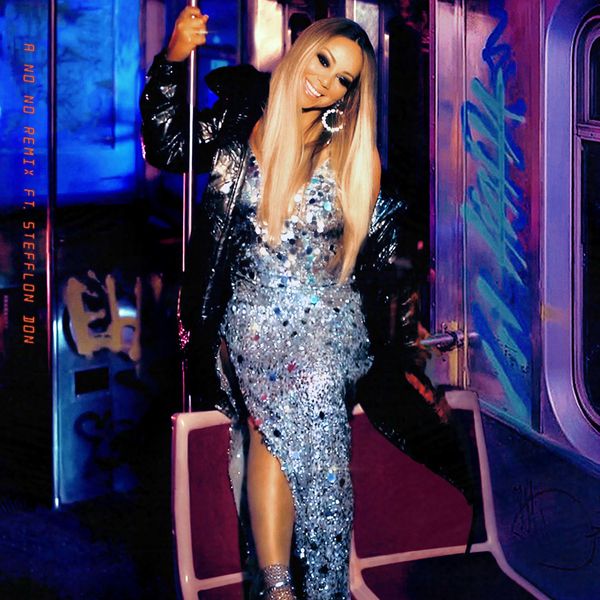 Mariah Carey's iconic Lil' Kim-sampling Caution standout, "A No No" gets a remix with London dancehall artist Stefflon Don, who lends her smooth flow and Jamaican patois to the track. With Stefflon Don's fierce addition, the song's message of breezy, but assertive refusal is further driven home. "I don't understand, why you got your tongue on my neck?" she questions a clueless wannabe suitor, effectively shutting him out. There's also a well-placed Left Eye shoutout, who as we all know, helped usher in a new era female empowerment and self-respect in music. So, scrubs be gone.

Dancehall legend Sean Paul and Latin superstar J Balvin join forces for "Contra La Pared," a sexy, hypnotic track about having a moment against the wall, in the club (or wherever being a sensual star is encouraged). Set your drink down and wind your waist when this comes on, against the nearest wall, stat.

We have ourselves a winner in the debut track from Nasty Cherry, an all-female band Charli XCX has been writing with in recent months. "Win," produced by Sky Ferreira collaborator Justin Raisen and co-written by Charli, is an '80s post-punk bop with hooks upon hooks (especially that addictive/repetitive "I need to win" bit). A band fronted by Kitten's Chloe Chaidez, Star Wars set decorator Georgia Somary, Charli XCX drummer Deborah Knox-Hewson, and model Gabbriette Bechtel sure sounds like success to me.

For as much fun as "R.I.P." sounds, it has a pretty important message, which, let's be honest: what's not to love about that combo? Combining Latin-influenced world rhythms and electronic pop melodies with electronic spice, Sofia Reyes, Rita Ora, and Anitta says, literally "R.I.P. to the bullshit," and it's an effective rallying cry to end all forces draining the world of hope, compassion and joy. Can't beat a party track that also makes you care more about humankind.

Chloe Lilac takes on the harmful "manic pixie dreamgirl" stereotype head-on in the title track for her debut EP. That song received a visual treatment, and it's out today. Alongside jarring vocal blasts and dreamy electronic synths, Lilac sings lyrics like "Want you to stay," and it's as if she's shattering perceptions of damsels in distress simply by being vulnerable. But there's strength in her vulnerability: by being honest about her own struggles to rid herself of unfortunate projections, she's helping millions like her. Here's to girls and women everywhere feeling a little bit more like themselves, and less like what others want them to be.

Lennon Stella releases her first track since last year's extremely catchy debut EP, Love, me. "BITCH (takes one to know one)," continuing in her knack for observing human interactions and the psychology of relationships, takes on venomous and toxic people in general. Whenever a confident woman is called a bitch, it's often meant to degrade or disrespect her. While that might be the intentional, it takes a certain other confidence to refuse the insult, which is what Stella does here, masterfully. When she sings, "It takes a bitch to know a bitch," it's almost like a shrug. Call her what you want, Stella knows who she is and what she wants. That's power no one can take from her.

The unstoppable Tierra Whack releases her latest full-length track, "Wasteland," a spacey R&B song that further solidifies her reign as a rule-breaking artist. "My presence is a gift," she sings, which is true. "I'm not in a road/ I'm in a lane," goes another couplet. She's singing about dating, here, at least on the surface, but because Whack is nothing if not conceptual, think of "Wasteland" as a series of diary notes to self as her star continues to rise. If I'm right about the song's meaning (and I could be wrong), given her groundbreaking Whack World video(s), imagine what this video would look like. Another world entirely, I'm sure.

DJ and producer Afrojack's new track, "Sober" recruits hip-hop star Rae Sremmurd and rising pop singer Stanaj, and it's the best of all worlds. Sremmurd brings his characteristic hype energy, rapping about a wild, boozy night with a new flame, while Stanaj sings plaintive lines about not wanting the night to end. Been there? Afrojack certainly understands how these nights are all high highs and low lows. As if we're on the rollercoaster of all parties involved, the beats go from high-octane, bass-driven trap to twinkling, synth-driven pop from verse to chorus. Needless to say, "Sober" is wild fun, and, as Stanaj sings, you won't want it to be over. I suppose that's why the repeat button was created. Up the ante by watching the futuristic video, which is out now.

We've been squarely in party mode for much of this week's playlist, so slow things down and light a cigar if that's your thing with Irish singer RuthAnne's soulful new song, "Love Again." The song is the kind of sweet, beautifully sung, and horn-filled doo-wop banger you might hear in a romcom montage, but that's perfectly fine. Judging by the lyrics and performance, RuthAnne knows she can find her way to your heart and clear its cobwebs. I can be a cynic, I admit, but her voice alone has me melting. Give this a spin and let it sit with you awhile. You might feel the same.

When Karen O announced she was producing an album with Danger Mouse, it was definitely a pleasant surprise. The outcome of it — an experimental collection fusing deep electronic grooves, R&B warmth, and Karen O's often-chilling vocal performance called Lux Prima — is even more music to our ears. "Turn the Light," one of the album's catchiest offerings, is every bit bewitching as its title suggests. Karen O's phrasing: "My love, you turn to light, tonight, to light," sound like she's singing "delight" over and over. Not mad at my confusion. It's pop-wise brain trickery so smooth and subtle, that yes, "Turn the Light," is in fact, a delight.