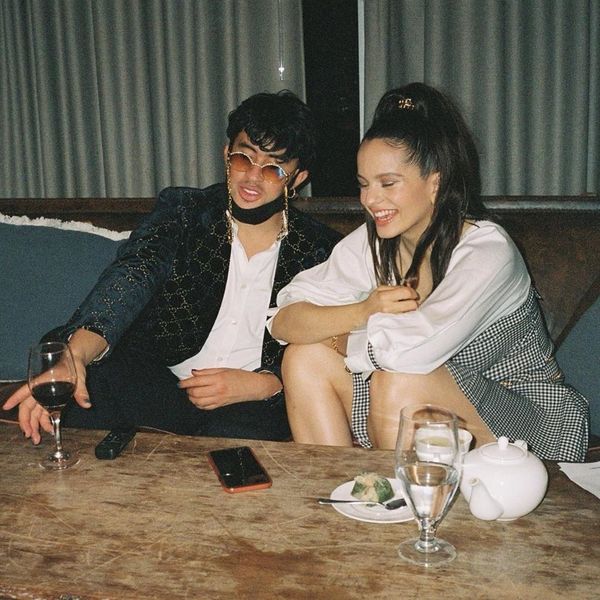 What Are Rosalía and Bad Bunny Up To?

Rosalía and PAPER cover star Bad Bunny are up to something. The Spanish and Puerto Rican artists were spotted sipping a nice glass of red and laughing charmingly together on Instagram several days ago. Now, the pair have unfollowed everyone on Instagram except for each other, and now everyone is screaming.

Rosalía fanned the flames when she stanned Bad Bunny on Twitter, throwing up his brand new cover with a few strength emojis.

What is happening? The good news is that, there are only good answers to the question. Obviously, everyone's first thought that the Twitter move of introducing... Bunniculía? Bad Rosalía? Bosalía? Rad Bunny? Bad Runny? Okay, the couple name is a work in progress. If it's true, and this is real footage of them on a date, than they've instantly become the most shippable couple the world, given the blinding nature of their collective rising star in music. Also, yeah, they're both really hot!

The other most plausible theory is that their online interaction is a promotional stunt to get everyone screaming for Rosalía x Bad Bunny collab (so that's what the kids are calling it these days?), right before they drop a sickening flamenco-trap-reggaeton. I'm not sure which possibility I'd prefer. Can we have both?

They officially have our attention, so it can't be long before they drop the bomb. If you can't wait, keep yourself busy by reading our Bad Bunny cover story, in which he shares his thoughts on the future of music: "It's not so much about changing the genre, but instead the way of thinking, not only in the fans but in the artists."