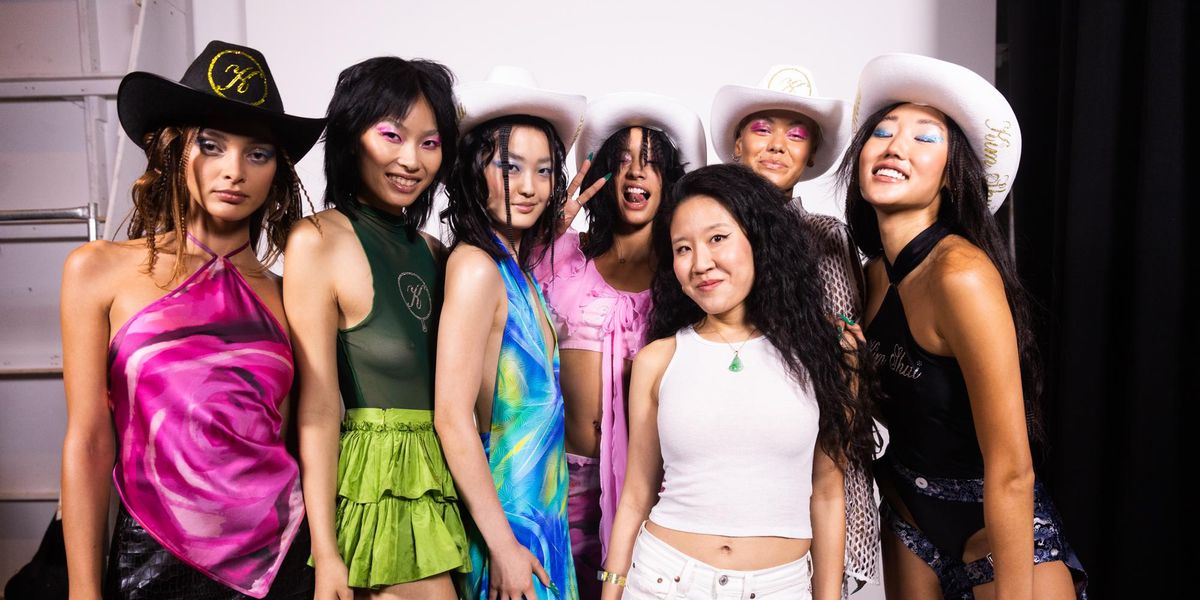 There aren't nearly as many people as brutally criticized or utterly adored as Azealia Banks. Either way, the star has undergone a massive resurgence over the last few years, celebrating her unapologetic, unfiltered, yet at times problematic, aura. After a string of breakout hits in the early 2010s, the world publicly turned its back on her, despite privately supporting her as a problematic fave who makes music for the girls and gays. "The streams don't lie," she tells PAPER.

Azealia is the girl everyone loves to hate, despite fighting against a colonial music industry that has exploited her as a dark-skinned Black woman in the past while promoting other mediocre male rappers. One has to admit the girl has talent, even if you won't "subscribe to her dumb-ass opinion," per her. On the eve before the 10th anniversary of Banks' iconic "212" music video, the artist added another accolade to her decade-long career — runway model.

Banks closed Kim Shui's Spring 2022 show on the final day of New York Fashion Week wearing a rose-printed chiffon dress, complete with a bedazzled corset bodice. Just as high fashion twitter can point out an archival Alaïa dress down to the exact stitch, the new generation of Gen-Z style lovers can point to Azealia's closing look and think, That's a Kim.

Banks' guest appearance was a complete surprise to attendees, the star previously being hot off the trail of multi-day comeback concerts in New York. Azealia and Kim became friends following the release of "Anna Wintour," when the designer slid into her DMs and offered to send her a few looks and Azealia fell in love with the brand's signature butterfly dress. They've been besties ever since, but they both knew they had to kick it up to another level.

"After COVID, I want to do everything. I'm trying to deep dive with the sharks. I'm going to do every-fucking-thing," she said. "I'm a fashion girl without the help of the fashion fucks."

Meanwhile, Kim Shui's signature Y2K-glam aesthetic is a fan favorite among young Hollywood and fashion week patrons alike. As a female designer of Asian descent, Kim has always recognized her place in the culture between two worlds — one filled with rich history and tradition while the other is fueled by glistening starlets on red carpets. While Shui's previous seasons often incorporated East Asian garments and textiles, this season felt like a refreshing departure from her catalog, directly rejecting the stereotypes catapulted onto her for years at the hands of Western imperialism.

"In the history of fashion, there's been a lot of Western designers that have fetishized the East and I thought it would be funny to tip that over on its head and present it from an Eastern perspective," she explained. In the same way that Italian and French designers may use exotic tigers, dragons, and cranes on their prints, Kim is appropriating Western aesthetics in just to make a point. It's thought-provoking, as most things often are with the young designer.

It wasn't all serious though — this is Kim Shui after all. Bedazzled chaps, iridescent mini-skirts, and blinged-out cowboy hats felt like they were pulled right from the costume department of a Coachella-inspired spaghetti Western film meant for Gen-Z Pinterest influencers. Pastel ruffled crop tops and sheer patterned knit dresses were paired with heeled cowboy boots, perfect for a night out at the rodeo with your Texan sugar daddy. It's a delectable, deconstructive exploration of modern-day Americana and what it means when a legacy is built on profiting on others.

Kim Shui and Azealia Banks are here to take back what a white, gatekept industry has shielded from them for so long. We couldn't be happier.