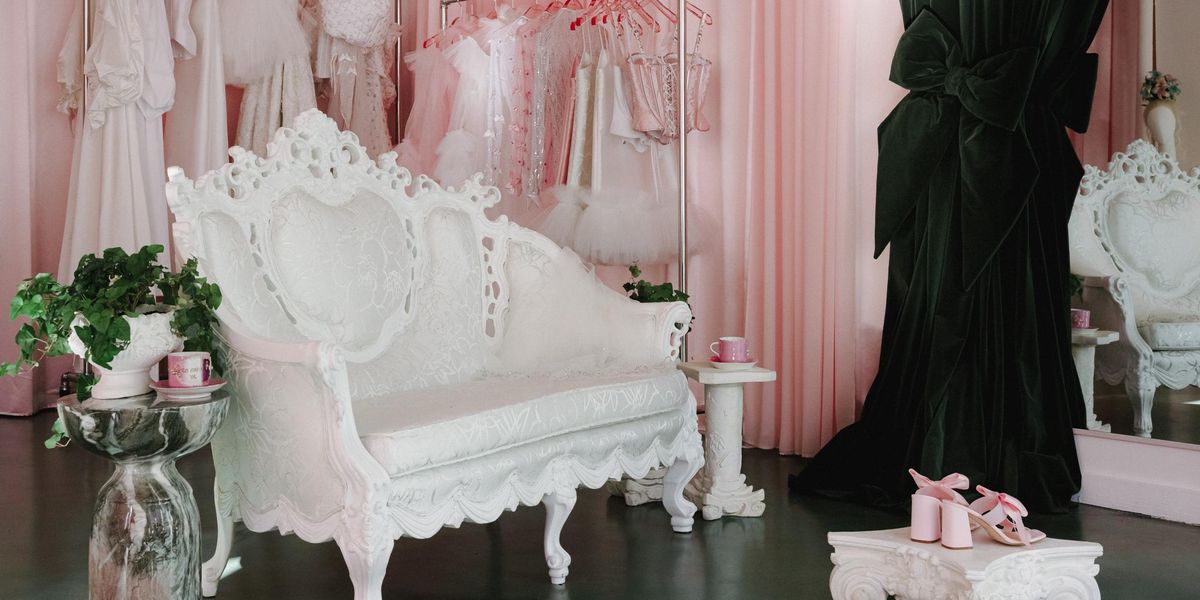 Last summer, Jackson Wiederhoeft made his first venture into bridalwear not even a year into launching his namesake brand of theatrical ready-to-wear inspired by whimsical stage characters. Though the Thom Browne alum's bridal debut coincided with a global health pandemic, his fantastical wedding creations were a natural extension of his romantic mainline collection.

In April, Wiederhoeft opened his first showroom and studio on W. 38th St in Manhattan after working and designing out his apartment for the past few years. Nestled in the Midtown space is also his bridal studio, which is designed after a traditional music box with soft and ballerina-esque decor and houses his second bridal collection for Spring 2022.

The bridal studio was done in collaboration with Queens Design Team, a queer and trans-owned interior design studio helmed by the duo of Smith and Motoki. Items were sources locally and secondhand, such as the wig and floral displays and hand-painted sculptures from local Brooklyn artists. (A baroque sofa was made from the same custom fabric featured in the new collection.)

"It's very interesting working with Jackson, because Jackson is someone who wanted to be a fashion designer for their whole life," says Smith. "They already have all these ideas, and we were just trying to enhance that. Motoki and I had never done a bridal showroom, and I had never conceived of doing a bridal showroom that we would also call a psychedelic swamp. I think at one point we looked at the music box and we were like, 'That's it!' We want someone to feel like they fell right into the music box and hopefully they'll never want to leave."

During each appointment, the brides — or "celebrants" as Wiederhoeft calls them — meet with the designer and receive personal touches throughout the custom-fitting before seeing the final dress displayed like a ballerina in the middle of the room as a nod to the music box inspiration. There's also a terrace outside with breathtaking views to enjoy treats like cookies and champagne.

"We started with a lot of research and looking at bridal salons to see what people expect," Wiederhoeft says. "I feel like the language there is very consistent as far as your pictures of brides on the wall, and it's all white and pretty. I think for me, the way I approach the brand is like, Why do something that's already done? I love being a niche brand, and I think I also got part of that from working at Thom Browne. I love the niche. I think that there's a lot of power in being specific and not trying to appeal to everyone."

For those who can't make it to the studio, Wiederhoeft is also offering virtual appointments. Each dress has a delivery time of 12-24 weeks with the opportunity for one to three fittings, and prices range from $290–$6,690.

"It was a lot of fun to turn traditional elements of bridal on their head, which is also what I'm trying to do with the collection," Wiederhoeft said. "Acknowledge the tradition, the classicism, but always have an element that feels a little bit off in a way that's modern."