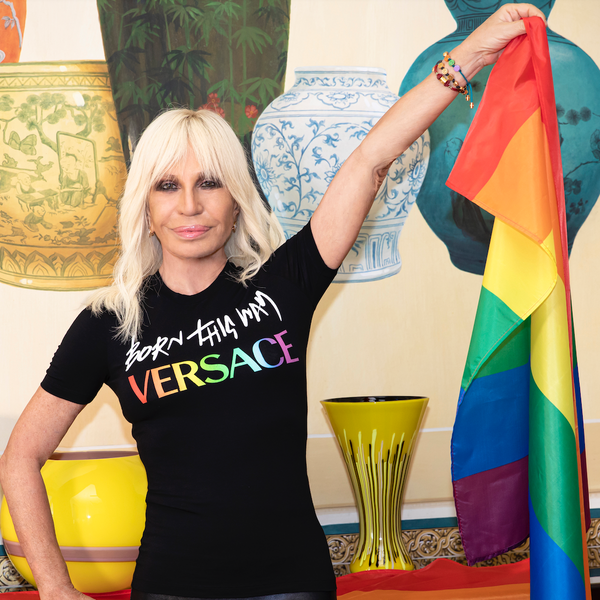 Italian queens, rise. Donatella Versace is giving us peak ally content as she partners with Lady Gaga to celebrate Pride in the best way she knows how: fashion.

Related | The Psychedelic Subversion of Gaga's 'Born This Way' Video

In honor of the 10 year anniversary of "Born This Way," the Italian fashion house is pulling out some looks from the Gaga vault. Versace was a massive creative inspiration for the Gaga team during the album's era, crafting several looks for Mother Monster's onstage and music video performances that celebrated self-expression and identity.

"Our friendship and our efforts to promote equality, diversity and inclusion have only become stronger with time," Versace said in a statement. "It's been 10 years since we created the looks for her Born This Way Ball, so we've decided to revisit the leather jacket - one of my favorite pieces from the tour - to be auctioned for a great cause."

The replica of Gaga's biker jacket, which took nearly 400 hours to make in the label's Milan atelier, will hit the bidding market today. The leather garment, constructed with the brand's iconic metal mesh and gold accents, will raise profits for the pop-star's Born This Way Foundation benefiting LGBTQIA+ youth.

Alongside the charity auction, Versace is releasing T-shirts and berets featuring a mutli-hued logo to show the world that they stand with queer icons forever and always. (Donatella memorably joined Gaga during World Pride 2019 at the Stonewall Inn.)

Even though we've already splurged a ton on Chromatica merch (jockstrap and bar soap included), we'll ration off a little bit of our paycheck to put towards this.

The Pride items in the gallery, below, are available now for purchase on www.versace.com.