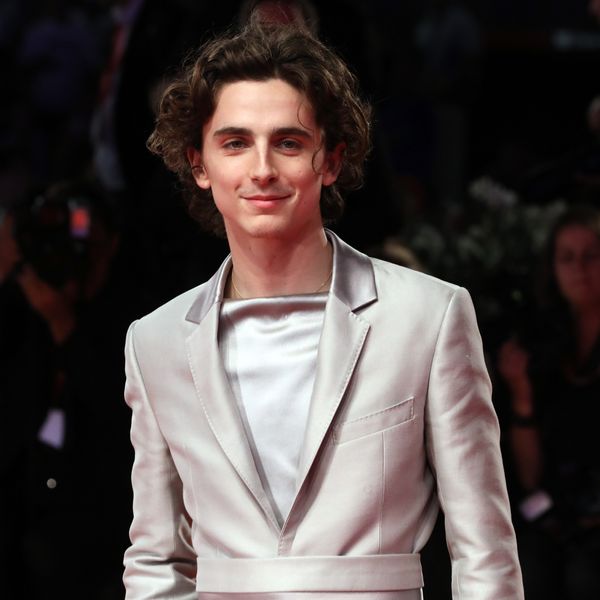 Timothée Chalamet is no stranger to giving us FASHION on the red carpet, but his latest show-stopping look may have just cemented his place in menswear history. Courtesy of designer (and longtime collaborator) Haider Ackermann, the actor turned heads in a perfectly tailored ivory tuxedo at the 2019 Venice Film Festival.

Although the color and fit was exceptional, it was the way Timmy styled the monochromatic look that had everyone's jaw drop. A satin undershirt replaced the traditional dress shirt, his trousers were cuffed to reveal some striking leather boots, and finally, that WAIST. It was cinched to the Gods thanks to a double-belted effect that the internet went crazy over.

Between THAT Louis Vuitton harness look and his floral-adorned suits by Alexander McQueen, Chalamet clearly has no interest in playing it safe within the confines of traditional menswear. The best part of all this? Unlike most celebrities of his caliber, he has shown no interest in working with a stylist, meaning of all his red carpet looks have been put together by him exclusively. The TASTE!

This ivory tuxedo, by the way, is from Haider Ackermann's spring 2020 collection, which will most likely debut this month in Paris. (He started combining his men's and women's shows exactly a year ago.) Some of Chalamet's most memorable looks have been by the Colombian-born French designer, including an all-white custom Berluti look he wore to the Oscars last year, back when Ackermann was that brand's artistic director.

In fact, Ackermann designed most of Timmy's looks for his Call Me By Your Name press tour. This time around, he is promoting his latest film, The King, where Chalamet plays a young King Henry V. Here's hoping he continues to work with Ackermann, who clearly knows how to make Timmy look absolutely stunning.