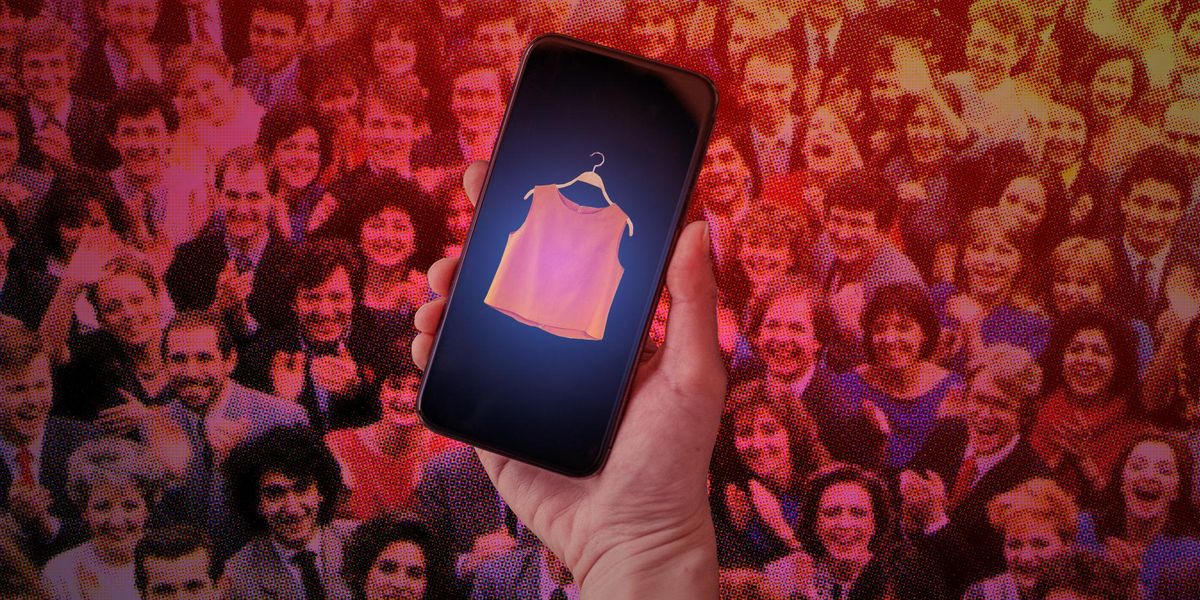 The very concept of thrifting has been rejuvenated through Gen-Z heavy apps like Tik Tok and Instagram in the last few years. What was once heavily ostracized in the hierarchy of social normalities — as buying secondhand often indicated a lack of means for lower class families — is now the latest fashion trend, particularly for teens and young adults. In today's digital landscape of algorithms and hashtags, "expert" thrifters (often white, upper class influencers) reign supreme as they amass hundreds of thousands of followers with their tips on where, what and when to thrift. Now, thrifting in itself isn't a problem: it might create new ones.

Related | Gen Z Texans Are the Next Wave of Vintage Fashion

"The idea of thrifting is brilliant," says fashion historian Rachel Weingarten over e-mail. "Instead of discarding or destroying, someone reuses, resells, or repurposes. Take it a step further and promoting the practice is also an excellent idea. After all, as we move away from fast fashion, what better way to enhance a wardrobe than by buying something that matters or by finding a treasure that no longer serves someone else?"

But like many movements that become inflated through social media, the actual issue can get buried in the sea of virtue signaling. Look no further than Blackout Tuesday of last summer when millions of Instagram users posted a black square as a response to murders of George Floyd and Breonna Taylor. Presumably, most people had good intentions. But it doesn't take away from the fact that once an action — whether it's boosting a legitimate cause like Black Lives Matter or sustainability — becomes visible, folks tend to stop there.

"Once anything becomes a cult of personality, the purity or original intent gets lost in the shuffle to aggressively promote what we have now come to see as online personal brands."

The fashion industry, in particular, has a particularly bad history of surface level activism. In the last decade, sustainable fashion has become a buzzword, but it's been a slow and uphill battle to enforce policies that actually support less wasteful productions (and pay fair labor to workers). The idea of thrifting and sustainability is certainly appealing, but as social media has shown, it's easier to talk the talk (or in this case: post the post) than to walk the walk by critically examining what issues thrifting itself is trying to fix.

At that same intersection of performance and profit is, as Jezebel writer Hazel Cills puts it, the gentrification of thrifting. Weingarten says it's not uncommon for acts of good deed to be driven by ego or money (we are, after all, still human living under capitalism). "Once anything becomes a cult of personality, the purity or original intent gets lost in the shuffle to aggressively promote what we have now come to see as online personal brands," she says.

Search "sustainable fashion" on any platform and you're bound to get a flurry of aesthetic infographics, thin white influencers and 60-second Reels of best thrift tips. On one hand, it is undoubtedly better for the environment that people are thrifting as opposed to buying new from sustainable brands. But on the other hand, one has to wonder how much of it is done in the pursuit of the personal brand, whether that monument will stay, and if you're a pessimist, if it's actually being done at all.

"Thrifting is having a moment that will probably be amplified," says Weingarten. "The larger problem will be when we scratch the surface and probably find out that a lot of this might have been virtue signaling on the part of the internet-famous faces who either don't practice what they preach or are paid hefty sums to say that they do."

"...a lot of this might have been virtue signaling on the part of the internet-famous faces who either don't practice what they preach or are paid hefty sums to say that they do."

Adam Minter, author of Secondhand: Travels in the New Global Garage Sale, is pretty optimistic that thrifting is here to stay. He argues that the outcome of people thrifting outweighs their motivation for doing so, even with the very valid criticisms that upselling — buying from donation centers like Goodwill and Salvation Army and reselling on apps like Depop or Poshmark at higher prices — is unethical. In his book, Minter talks about how we're facing an environmental crisis with our excess textile waste (85% of clothing ends up in landfills or incinerators). Thrifting relieves some of that waste and despite what some might think, thrift stores are not facing a shortage of supply.

"The average thrift store in America only is able to sell about 1/3rd of the inventory that it has," said Minter over a phone call. "The other 2/3rd comes off the floor or they have to find somewhere else for it to go. That somewhere else might be an export market [like Depop, ThriftCon, Poshmark, etc]. It might be a rag making operation, it might. But buyers are doing all of us a favor. The more people go into thrift stores and buy stuff up so that thrift stores can get that stuff off their floors, it's a good thing for everybody."

With misinformation tending to run rampant on social media, it's easy to confuse ethical harm with environmental harm (though oftentimes they are one and the same). But in the case of thrifting having a cult following, it leans towards the former. While it doesn't necessarily mean it's morally right that folks are making a profit off of secondhand wear, it also doesn't negate the positives it does.

Or as Minter puts it: "Anything that promotes reuse — whether it's for profit or not for profit — to me, that's sustainable. There's no question."

It is worth noting that in a capitalistic society, all means of production (even repurposing) has some element of profit in it. Take no further look than ThriftCon, a buzzy vintage gathering selling merchandise promoting sustainability. But again, what else can we expect when the carrot dangling at the end of the stick amounts to dollar signs and likes?

"There will always be purists who understand the importance of value over junk (and that's somewhat ironic considering that at one point junking was a term used for thrifting)," says Weingarten. "Sadly though, I think we're going to see new products sold under the guise of thrifting, even at events geared only to thrifting. In the end, it's about making money, or they wouldn't be doing it on that scale, would they?"