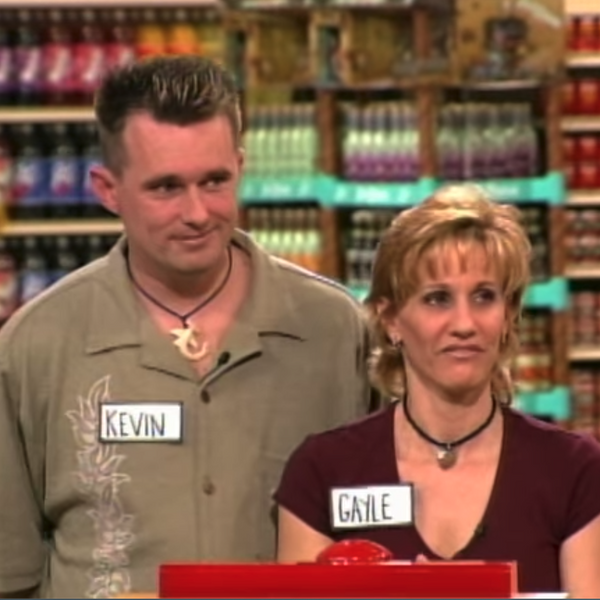 'Supermarket Sweep' Is This Summer's Most Stylish Show

Even before the pandemic changed almost every aspect of ordinary life, I was never super concerned with what I wore to the grocery store. A pair of athletic shorts and freebie t-shirt would suffice for the hour spent crossing things off my shopping list. But after watching Supermarket Sweep, I have been inspired to bring some wardrobe magic to the Food Bazaar aisles once we return to some semblance of normal.

Originally airing during the 1960s and rebooted during the 1990s, Netflix added 15 episodes of the grocery store-themed game show to its catalog in July, and there's even a revival in the works with Leslie Jones as host. Three teams of two play grocery market trivia to add increments of 10 seconds to their time bank, all culminating in the chaotic Big Sweep, when contestants run around the store set trying to rack up the highest dollar amount of goods. This usually means shoveling humongous hams, expensive baby formula, bonus items like giant plushie pandas and more into their carts mid-frenzy.

It's a treasure trove of nostalgia, reminding '90s kids of retired products from their lunchboxes. There's a comforting parallel with our own rushed shopping experiences during the current pandemic, without the show being too reminiscent of reality – contestants are worried about finding a certain brand of deodorant for extra time and money, not being exposed to COVID. It's an easy, feel-good watch, the perfect pick for the end of a day spent sitting at home and grappling with the dumpster fire of 2020. But what's more appealing is seeing the fashion from the decade before the turn of the millennium. Perms galore, a motley assortment of colorful vests, and a smattering of ugly sweaters have made Supermarket Sweep the most stylish show of the summer.

The first episode kicks things off with a stylish gaggle of contestants. Teacher duo Janet and Peggy get an A+ for Janet's huge glasses (Warby Parker is shaking) and Peggy's floral print top along with her perfectly swept hair. Cindy and Vanessa's outfits are both cute and practical, including appropriate footwear for sprinting during sweeps. Meanwhile, points were made with Malinda's vest/mullet combo and her fiancé Clint in a Canadian tuxedo of sorts, featuring extra light stonewash jeans. (I've also got to say, I know it's been ages since I've felt a man's touch due to quarantine, but he looked mighty good manhandling turkeys into his cart.)

Beyond seeing a bit of everyone's personal style, it's also adorable when the contestants are matching or wearing corresponding pieces. In a later episode, Robin and Ellen are ready for business in their pink and purple button-ups, extra points for Ellen's different colored buttons. Details! Cindy Sue and Cindy Lou might share part of their first name with each other, but they bring their own takes on violet and cyan floral patterns. And while married couple Kevin and Gayle's outfits don't exactly match, they nod to each other with corresponding jewelry – him stunting a little harder with a hammerhead shark as a pendant.

It's even a game show that incorporates an outfit change. While contestants compete in quizzes during the first part of each episode wearing their own clothes, the final dash through the grocery aisles has each team wearing color-coordinated sweaters that make everyone look fresh AF. Losers apparently got to take home these pullovers.

Supermarket Sweep serves as a primary source documenting the days of Nintendo 64 and the Clinton White House, and part of the reason the show is is so mesmerizing is because so many '90s trends are back in vogue. But instead of getting to see rehashed versions of the decade's wardrobe, as we might through a designer's nostalgic new collection or a retro TV series, it is a cultural artifact — the reason why we see what we see while online shopping and our Instagram feeds.

Many of these trends have been resurrected, with '90s inspired looks a dime a dozen on websites of popular stores. Supermarket Sweep-style Mom vests have been worn by the likes of Miley Cyrus and Shailene Woodley in more recent years. The pastel embellishments on an August Dua Lipa outfit are reminiscent of the various textures and embroideries donned by various competitors. Those sweaters winning duo Susan and Karen wore? Could see the Jonas Brothers wearing something similar for a PAPER editorial or something. The TikTok boys getting perms could very well stand alongside the flurry of heightened hair on the game show. Today's trends largely consist of what people think '90s style looked like. Supermarket Sweep shows what it actually was.

So the next time a '90s capsule collection catches your eye, perhaps the real test is comparing it to Supermarket Sweep – the actual time capsule. Many of these threads were probably bought from a department store or gifted at Christmas, and today some are probably sitting in someone's well-curated Depop store. Perhaps the perfect opportunity to up my fashion game at the supermarket.