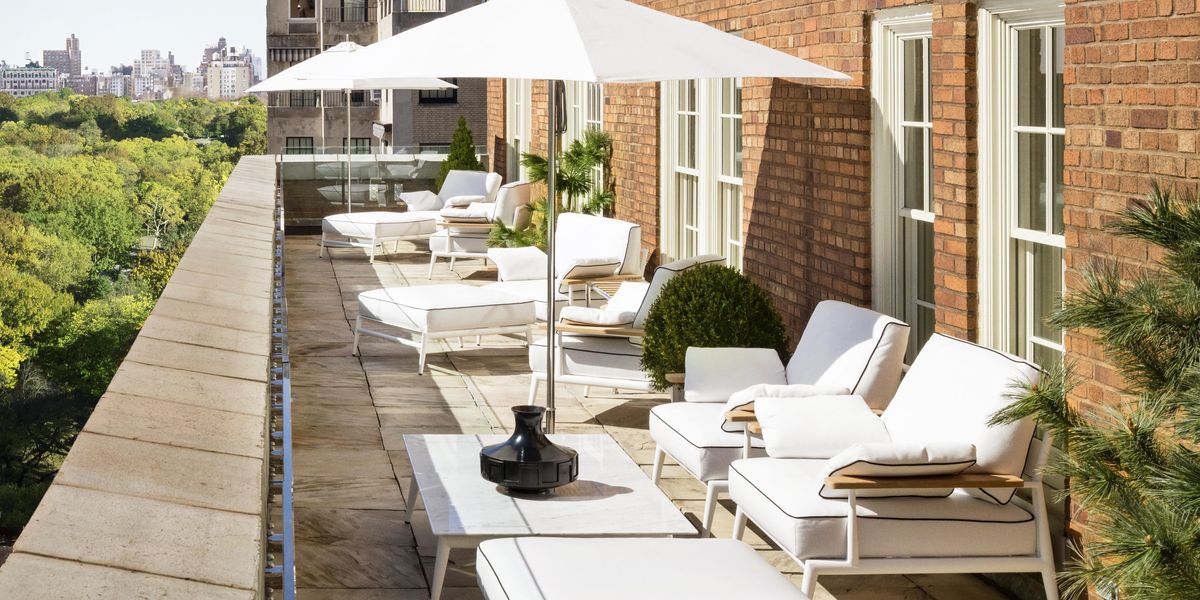 Kim Kardashian gets cinched into her custom Thierry Mugler minidress with dozens of delicate crystals that resemble raindrops spilling from her body. Nearby, sisters Kylie and Kendall Jenner transform into over-the-top, pink and orange Versace muses, their floor-length gowns decorated with enough feathers to rival a Las Vegas showgirl. In the same building, Jared Leto cradles an exact replica of his own head, while Janelle Monáe balances a towering headpiece of oddly stacked top hats. Then, there's Gwen Stefani, Tracee Ellis Ross, Salma Hayek, Bella Hadid — all within walls of each other. The transformations are extreme, the stars are bright and the excitement from glam teams — hair extensions, nipple tape, coffee runs — fills every hallway.

The Mark Hotel has become a colorful piece of pop culture, having annually hosted these famous Met Gala attendees just a few blocks away from the iconic museum. Every year (until COVID's 2020 restrictions), the event's A-listers would check in, get red carpet-ready, and then pose for a swarm of cameras and fans outside the hotel entrance before finally descending on the Met's luxurious fundraiser. And much like the Gala, with its unapologetic opulence and allure, The Mark is wonderfully indulgent — which makes it the perfect choice for a sophisticated New York City staycation, especially after a year of sameness and needed practicality.

You might not think you deserve it, but this isn't about deserving alone — it's desiring.

Located in NYC's Upper East Side, The Mark is right next door to Central Park and immediately captures the Carrie Bradshaw SATC fantasy so many people came to experience but eventually gave up on. If you live anywhere downtown or in Brooklyn, everything this high up and off the 6 Train feels like an entirely new world — where the fur coats appear to be real and more people seem to take Yellow Cabs than call Ubers. It's a refreshing change of pace and The Mark's Haute Dog Stand (yes, haute) is your North Star for the beginning of a weekend that leans into this grandeur. Find it, grab a gourmet dog with special Kimchi relish and pretend to be in a different tax bracket for a few days.

Related | Take a Staycation at The Standard

The Mark's graphic, black-and-white striped floor is its unofficial greeter, grounding a lobby decorated by French designer Jacques Grange, whose clients have previously included iconic names like Yves St. Laurent and Valentino. For being a five-star heritage hotel, this modern environment is anything but stuffy, with bold artwork protruding from its walls and elegant furniture reflecting the Met Gala's 2019 Camp theme it once played backdrop to. Surely, Cara Delevingne's rainbow Dior playsuit with matching crystal Swarovski cane and stripper heels would've looked incredible inside the space.

Upstairs, though, the rooms offer more a calming escape from the city — the type of effortlessly plush, cream-colored suites you can stay in without leaving once. This is where you're encouraged to finally slip into that matching white robe and slippers set, and take it off only to later slip into the bath. If you choose to, of course, the area is ripe with nearby activities, from shopping (Burberry, Cartier, Louis Vuitton etc.) to dining and plenty of art galleries. Should you opt for a more private staycation in, the views from The Mark put you eye level with the Manhattan skyline — a fresh, new perspective on a scene that, quite honestly, never gets old.

Speaking of a bath, The Mark's suites offer bathrooms that are comparable in size to a small NYC studio, depending on which room you book. When you're not lounging in bed, surrounded by a surplus of heavenly pillows and watching TV, you'll likely find yourself switching between the shower — with its enormous, cascading shower head — and the deep-soaking bath tub. It's the type of tub you're able to really stretch out in — legs elongated, never bent — and pour so much soap in that it becomes an overflowing, sudsy experience to rival Rev Run. Grab some sparkling wine while you're at it.

Depending on how much you're willing to lean into the hotel's available luxuries, The Mark's amenities run deep. From its special 24-hour relationship with Bergdorf Goodman to perfected macaroons from French bakery Ladurée, a staycation could be the most extreme act of self-love. But nothing is as over-the-top as The Grand Penthouse, dubbed a literal "Castle in the Sky," which claims to be the United States' largest and most expensive penthouse suite — good enough for Meghan Markle's baby shower, hosted in 2019 by Serena Williams.

But you don't need a suite with three king bedrooms, 26-foot ceilings, six fireplaces and a balcony overlooking Central Park to dip your toe into all The Mark has to offer. Even its most humblest offerings are far from humble, with that timeless NYC appeal and a taste of five-star living in a one-star period of time.