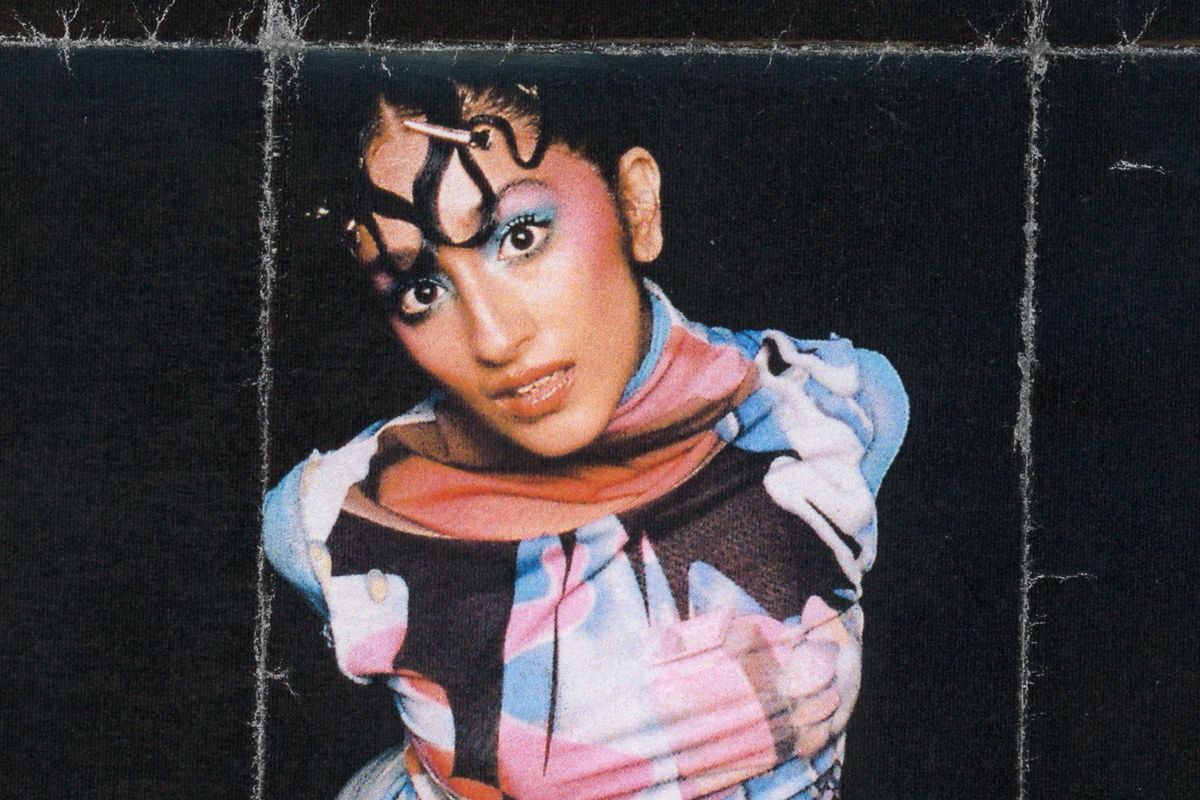 "Like a Telfar drop, I don't wanna see it then it's gone," sings rising star Raveena on her new single, "Tweety," comparing the internet's buzziest bag to a budding love affair. The track, which follows the soul musician's 2020 Moonstone EP, calls back to the ease of early 2000's Destiny's Child with enough contemporary references to sound fresh — and, in many ways, progressive — for a modern-day release.

"Tweety" is intimate and knowingly innocent, like listening in on a three-way call taken from her childhood bedroom with furry pastel pillows, Usher posters and rainbow gel pen love letters strewn across the floor. "Blushing like I'm tweety bird," Raveena admits. "If you want me you can say the word/ You feel like my favorite song/ I'm too shy to sing along."

But the music video for "Tweety" is far from restrained. Directed by Raveena and Chris Cadaver, the visuals look like twisted takes on the commercials you'd see in-between shows on TeenNick. She sits on a giant transparent telephone, flings sticky hands at the camera, contorts her body on a stylized Twister board and poses with a blown-up head like one of Steve Madden's campaign models.

Below, Raveena, who's 26 and currently LA-based, tells PAPER more about the making of "Tweety" and one crazy COVID night when she kidnapped her friend and drove her to Malibu to play tag on the beach during sunset.

This is your first release of 2021. How is this a reflection of the music you'll be releasing throughout the year?

In some ways it's a reflection of where I'm going and in many ways it isn't. If Anything, I think it marks an introduction into a lighter, more upbeat side of myself that I haven't shared with audiences yet. I'm also experimenting with a lot more genres and styles that I haven't really engaged with before, and I'm excited to continue to share with people that exploration of myself.

"A lot of people come to my music for that kind of escapism and dream-like feeling."

How does this new music build upon or stray from previously released work?

The dreaminess of "Tweety" feels like it builds upon my past sound. I think a lot of people come to my music for that kind of escapism and dream-like feeling. It definitely strays a lot though in that I'm singing over a very upbeat track that is definitely more directly inspired by hip-hop, and I have some faster flows and rap-like verses.

Lyrically, what story does "Tweety" tell?

"Tweety" is a really light and fun song about the very early stages of falling in love. I've released so much heavy work lyrically in the past and I've been experiencing a lot of feelings of lightness since that really heavy time in my life. It's been so nice making some songs that are more reflective of that very indulgent and unadulterated kind of joy.

Lyrically, I wanted to tap into the space of how all the songs I listened to when I was in middle school made me feel. I was listening to so much early 2000's R&B and pop like Alicia Keys, Usher, Nelly Furtado, JoJo, Natasha Bedingfield and Destiny's Child back then. This song really speaks to my inner child! There was a whimsicality and sense of fun in that time that I wanted to embody in this track, while also making it still feel like it belonged in 2021.

Who'd you work with on "Tweety" and how did these collaborators impact the final product?

I worked with all of my best friends on this project, which made it so much more special. Everett Orr and Aaron Liao, my two main musical collaborators, worked on the beat individually. And then I was hanging out with one of my best friends Donavon (also his own beautiful artist in the R&B space) and my long time producer collaborator Everett Orr (he's produced everything of mine so far), and we wrote the song together so naturally. I think most of it came out in under 30 minutes. I think that sense of familiarity and love with all my friends allowed me to have that feeling of safety to take a leap and try a sound out that I never had done before.

On the visual side, I worked co-directed the video with Chris Cadaver, who is a graphic designer, painter and music video director. It was one of my favorite video experiences and I feel like we really paid homage to all the '90s and psychedelic influences that were in our references. We worked with this amazing animator and editor Louis Celano, and he helped shape the 3D aspect of the visuals.

When's the last time you "rode until sunrise," as you sing on "Tweety"?

I thankfully have a friend group out in here in LA that makes a lot of time to spend together in nature and going on long drives together. Those drives and hikes have kept me sane in the COVID era. We have had countless sunset moments all along the West Coast and I'm so thankful for that.

The last sunset moment I can remember was for my friend Gabby's birthday in late December. She said she really wanted to see a beautiful sunset on her solar return. We wanted to keep the gathering as safe as possible, so we met up with a few friends on the beach for sunset and did a socially distant thing outside. But it was actually a surprise party for her, so me and my friend kidnapped her from her house and put on this blindfold and had her in the back of the car for 40 minutes.

In a sense it was kind of awful of us, but I think she was weirdly... turned on? She said she was into it, the sensory deprivation of it all. We also played that 25 minute-long Dream x Kanye song in the car, so time felt like it was still and things were getting weird in a nice way. When we got to the beach in Malibu, the sunset was faint and cloudy, and it was a bit chilly but the feeling overall was cinematic. We played tag like 5-year-olds and cut a very queer (think foraged flowers and fruits all over) homemade vegan cake, and it was a pretty perfect evening overall.

"The song will only be done when you have the inner knowing and confidence in yourself to say that it is complete."

How do you know when a song is complete and ready to be released into the world?

When do we ever know? I think maybe when we can finally breathe easy when we listen to it and have a glimpse of that same giddy feeling we felt when we first made it. We worked on "Tweety" on and off for almost 7 months after that initial writing session and went through countless mix passes. I had so much trouble letting go of this song and naming it as finished. But I think it was a learning lesson for me ultimately, because I realized that the song will only be done when you have the inner knowing and confidence in yourself to say that it is complete. You can look at a song from a thousand angles and get hundreds of opinions on if it feels right, but only the artist can truly make the call on when it feels complete. I think that process as an artist requires going through all that immense doubt and careful listening, and then actively stepping away and coming back with a clear and confident mind.

Stream "Tweety" by Raveena, below.