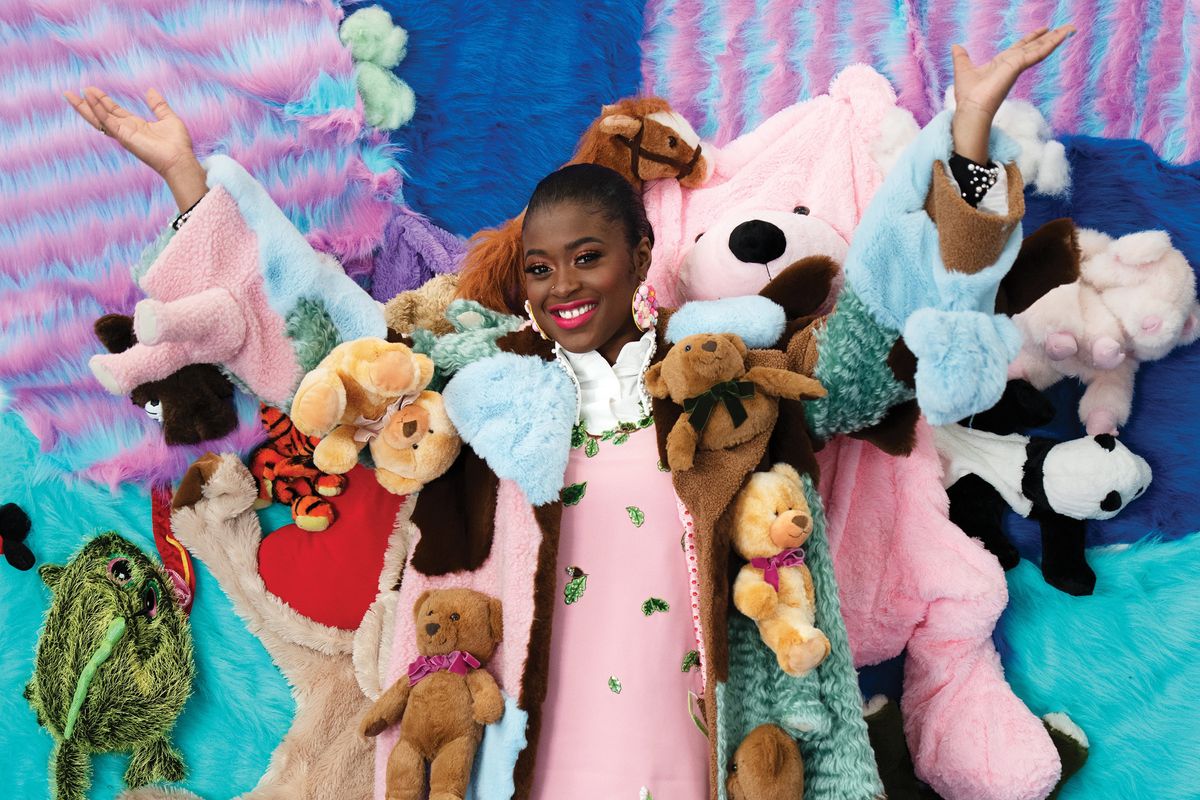 There's no such thing as a linear conversation with Tierra Whack. As we catch up inside a studio in mid-city Los Angeles, topics bounce around from white boys ("I like black men [but] I'm seeing some white dudes though and they're kinda cute!") to her favorite episode of Cartoon Network's The Regular Show ("Gimme Some Sugar") all the way to her wants and needs ("sometimes people are just in my life to give me hugs or eat my ass"). The duality of man.

I often forget the original question but it almost doesn't matter because we always end up somewhere interesting. She doubles back and follows up and floats around in her head for a while. That's the beauty of her brain: it's full of so many thoughts and so many ideas and while they may not always be ripe, she's always ready to share.

That's exactly how the 23-year-old Philly-based rapper works as well. "Everything just comes together with me. I see something and I'm like wow that sticks and I'll use it a few months later or two weeks later or a day later." Whack is influenced by anything and everything. She says, "If someone asks what inspires me, it's life, death, everything! The whole universe! I just think the longer I stay alive the more ideas and experience I'll get."

In between the time we first talked in July 2018, she's amassed a cult-like following, played coachella, performed on Jimmy Kimmel, got nominated for a Grammy, "adopted" said cult like following, launched "Whack History Month," in which she released a new single each week for five consecutive weeks this past February and March and met Lil Jon. This is more than just her moment, Whack is well on her way to making her mark on hip-hop.

Her vision – which extends to both her music and her style – is specific and special and she makes sure to keep it intact. She's a Leo to the core (see photos) and she "likes what she likes." When she's into something, you feel her enthusiasm so palpably but when she's not having fun or something doesn't feel right to her, you know right away. Right now, she's mostly focusing on perfecting her own sound and craft and is picky and thoughtful about collaborations and features. But when it comes to her eccentric style, she chooses a more collaborative process. No color is too loud, no jacket is too big, no hairstyle is too high and no label really matters. It's all about the look and not the name. "I don't really care who the designer is. If it looks cool I want it."

She partnered with an up-and-coming Philly-based makeup artist and custom designer named Aunt Tot to design a lot of her first fits. "A friend introduced me to her when I was trying to get my makeup done," Whack recalls. "Then I saw she also made outfits so I was like, 'Wait! You know how to sew?' I started giving her all these crazy ideas and she was doing them and we just..." She clasps her hands together.

"I love underdogs," she continues. "I dig and I find the gold... but don't get me wrong I know my shit. I'm, like, a costume person. That's what was so crazy about me and Tot. She was more like a girly girl type and that's not what I want. I want a big, boxy t-shirt with holes in the back and a tail."

Collaboration is not only something she's evolving in her work but also in her personal life. "I'm so independent and I'm such a loner. But I realize the bigger I get, the more shit I go through [and] I do need people. So I'm learning how to love. I'm a hardass, tough love, but I'm learning to be more soft. I tell everybody I love them. I lost so many people last year." It's been a hard time for hip-hop. In less than a year, the community has mourned the loss of Mac Miller, Philly rapper Tech 9, Puerto Rican trap artist Kevin Fret and, most recently, Los Angeles legend Nipsey Hussle, and that's just to name a few.

"She was more like a girly girl type and that's not what I want. I want a big, boxy t-shirt with holes in the back and a tail."

Alongside learning to love, Whack is learning to take compliments (and not a moment too soon because she's already starting to drown in them). When the conversation comes up she quickly pulls out her phone and starts dialing. "I want my best friend to answer this." She holds the phone under my chin, "How does Tierra take compliments?" I ask. Almost immediately her friend says, "She'll be like 'shut up!' If I say something nice to her she's like, 'don't say that to me.'"

"It's a learning curve!" I assure her. Her friend chimes in playfully, "I think that she secretly loves it but she just doesn't know how to respond to it. She's gonna blush and she's gonna fight it."

The modesty is refreshing despite the well-deserved words of affirmation. And there's only bound to be more where that comes from. She's already given us so much (even in just fifteen minutes of Whack World!) and we can't wait to see what she creates down the line. Although she won't share too much regarding future projects, she says she's working on more music and more visuals and may branch out into movies. When pressed for just the smallest breadcrumb of details about what we can expect, all she'll offer is that her art will be taking "another step forward." She clarifies, "A big step. A leap."