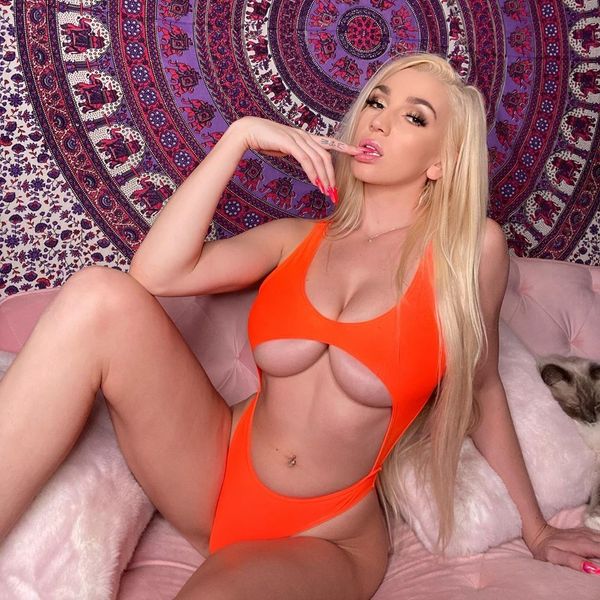 Kendra's brand is "girl next door," so the more colorful looks she favors when attending music festivals don't make sense for when she needs to be on camera. "My fans like to see me when I'm just looking natural instead of how they used to do it back in the day, making you look like a bombshell."

Through trial and error, Stanley learned to stay away from bold lip and eye colors "because it's going to go everywhere." Instead, he'll dab on a liquid-to-matte lipstick to stain the lips with color and then cover them with gloss. "If that's smears, it won't create a ring on your lips." He says avoiding heavy foundation is key, because if your scene partner has a beard, "it's just going to scrape it all off." But as he learned coming up as a drag queen, plenty of powder can help lock any look in place, no matter how covered in sweat — or other fluids — someone may get. "It's very nuanced."

Stanley applies the same consideration to performers' bodies as he does their faces. "That's one of the main differences between porn makeup and more editorial makeup," he says. "You're not only considering the body but also what's under the clothes, because they're going to be coming off." Stanley is careful about checking in with his performers before working on their body, "because my responsibility is to make sure that they look flawless on camera, and even if they don't notice something about their own body, it's my responsibility to check in about it. So maybe they actually don't want that birthmark covered because it's a part of who they are. But maybe there's some blemishes on their breasts or something and I say, 'Hey, can I touch your breasts to cover these up?' And maybe they don't want them covered up."

While most female performers are sticking with a natural look, others have made glamour their signature. Rebecca More, one half of viral superstars the Cock Destroyers, isn't interested in a toned-down aesthetic. "I love full on super glam, fake lashes, red lip... and black eyeliner," she says. "The whorier the better." She's also not interested in light coverage or constant touch ups to keep her face looking flawless.