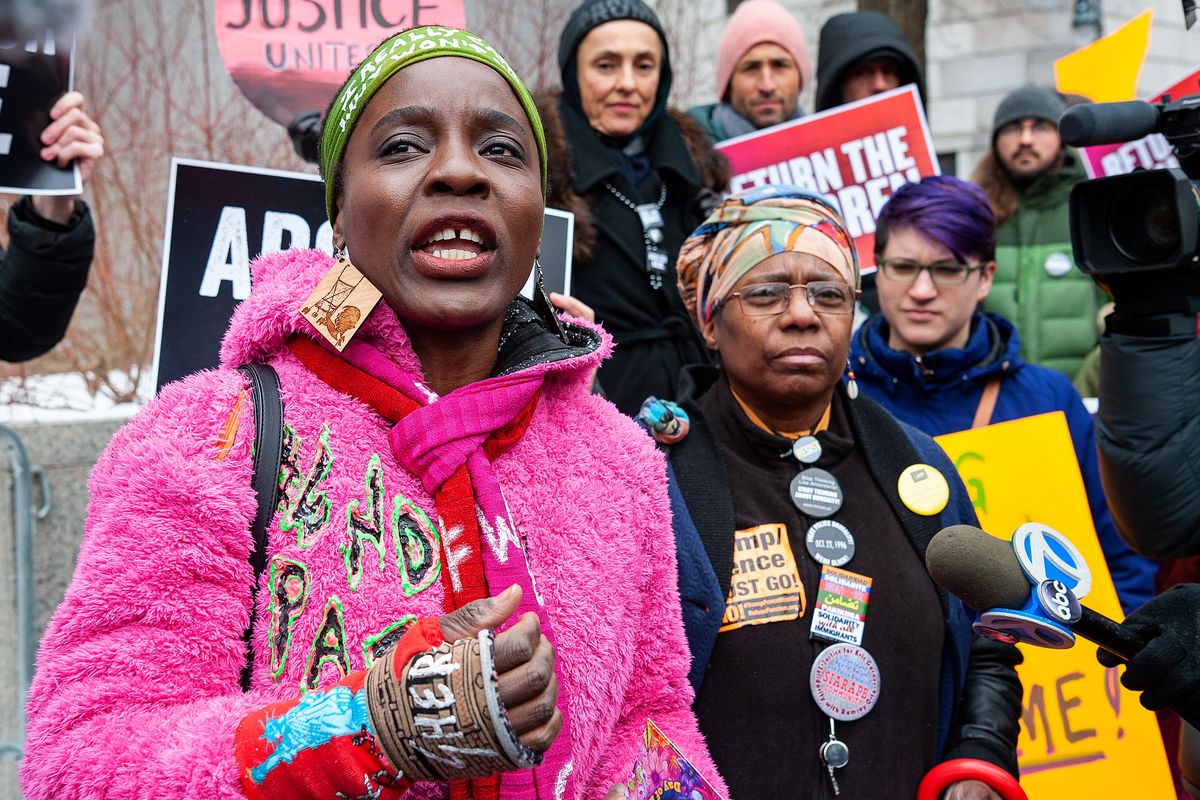 The Woman Who Climbed the Statue of Liberty Needs Your Help

Activist Patricia Okoumou feels as though she has been forgotten. The 45-year-old Staten Island immigrant, originally from the Republic of Congo, made history last year on the Fourth of July when she successfully scaled Statue of Liberty, becoming the first woman to do so.

The action was taken as part of a series of protests last summer held by Rise and Resist to fight President Trump's ongoing "zero-tolerance" immigration policies, which ultimately led to a family separation crisis at the U.S.-Mexico border. Rise and Resist members dropped a banner reading "Abolish ICE" at Lady Liberty's base, but without the group's knowledge, Okoumou also planned to climb the base of the statue, where she protested for three hours as police ordered her to come down.

Okoumou's actions have so far resulted in being charged with up to three misdemeanors: disorderly conduct, trespassing and interference with government agency functions, all to which she pled not guilty. In December 2018, Okoumou was found guilty on all three aforementioned charges at a Manhattan federal court, which could imprison her for up to 18 months. She will be sentenced tomorrow, March 19.

"It's like people have moved on and forgotten about the Black woman who climbed the Statue of Liberty for the rights of children who have been thrown in cages."

Since this event, Okoumou told PAPER, much of the buzz around her continued work has quieted. "It's like people have moved on and forgotten about the Black woman who climbed the Statue of Liberty for the rights of children who have been thrown in cages. We know the story would have never died if I were white," she said. "But it's not really about me. What about them? Why have we forgotten about the children in cages?"

Okoumou has forged ahead with her #ReturnTheChildren campaign, having since climbed the Eiffel Tower in Paris, done in solidarity with asylum seekers, as well as scaling the Southwest Key nonprofit detention center location in Texas. During the latter action, Okoumou dispersed Valentine's Day postcards submitted from around the world on the center grounds, with notes of encouragement for the children inside. (It is worth noting that The Trump administration is reportedly paying Southwest Key $458 million to run immigrant child shelters, and its CEO, a former migrant farm worker named Juan Sánchez, earns a reported $1.5 million yearly salary).

Okoumou said these events have led to her being placed on heavily monitored house arrest. She insists she had done nothing illegal or wrong. "I stood out and did what most people dream to do," she said. "I put my body on the line and I'm still doing the work."

Okoumou said the way conservative politicians talk about the family separation crisis is steeped in misleading and xenophobic rhetoric designed to keep people distracted. "You can't call human beings illegal; you can't call human beings aliens because our children are listening," she said. "Aliens come from outer space, and by calling our children that who want better lives, we are a detriment to them."

Since the Trump administration began implementing its "zero tolerance" policy at the border, more than 2,000 children have been taken from their families and placed in detention centers, according to official figures. Children younger than five have been held interminably by ICE officials; expectant mothers who have been separated have reportedly experienced complicated pregnancies, including miscarriages due to stress and inadequate medical care. So far two children, that we know of, have reportedly died in ICE or Border Patrol custody, including Guatemalan seven-year-old Jakelin Caal Maquin. Experts have shed light on how traumatizing these experiences are for young children, mainly that they trigger a lifetime of "toxic stress."

A federal ruling in June from California U.S. District Judge Dana Sabraw ordered the Trump administration to reunite separated children with parents within 30 days. That month, Trump issued an executive order to end family separation, however, after that 30-day period the administration reportedly needed extended time to reunite more than 2,700 separated children with their families. Almost all of those children have now been reunited or released to sponsors, who are usually close relatives. A January report by the Department of Health and Human Services' Office of Inspector General revealed that the administration's lack of a sophisticated tracking system meant that thousands more children were likely separated from their parents and then released from government custody than what the Trump administration had previously disclosed.

As for Okoumou, whose actions are meant to galvanize attention toward these ongoing crises, she is encouraging those who wish to support her freedom to attend her sentencing in New York tomorrow, and to write letters on her behalf petitioning for her release, by going here. If you are interested in attending and learning more about Okoumou's case, the sentencing hearing is open to the public, and all pertinent details are below. To learn about Okoumou's #ReturntheChildren initiative, go here, and to get involved with various initiatives fighting the ongoing border crisis, click here.