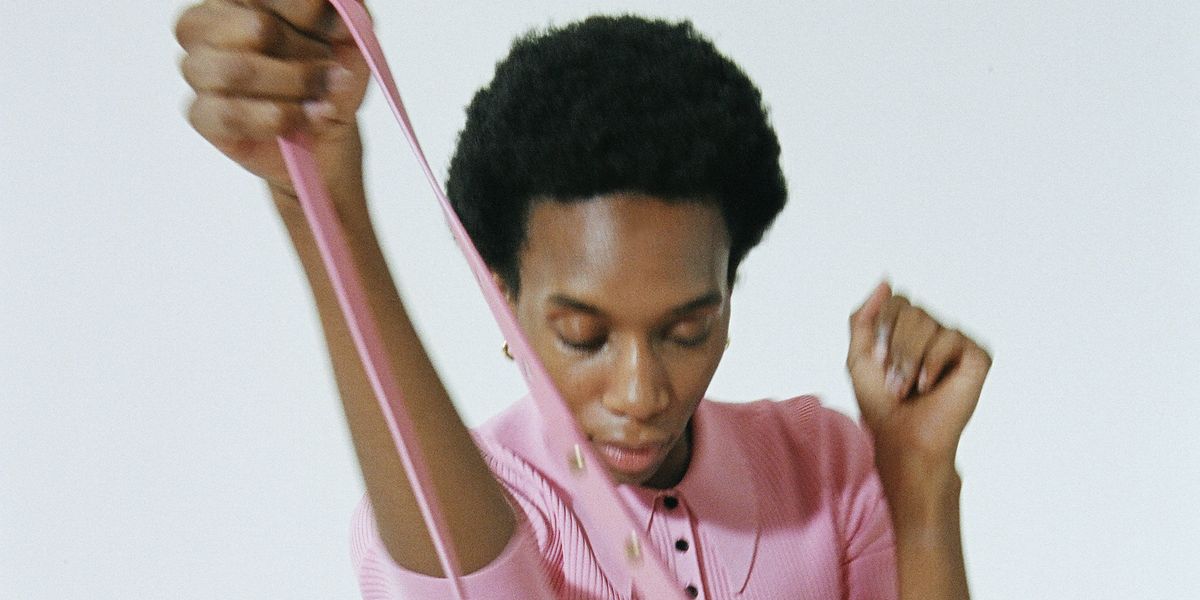 Parker Kit Hill has come a long way since his early Vine days seven years ago. The dancer and social media star has already modeled for Calvin Klein, Sandy Liang and Valentino while attending shows by Thom Browne and Maison Margiela during Fashion Month. And more recently, the IMG face signed on as brand ambassador for Mansur Gavriel.

The New York-based, minimalist label tapped Hill and a slew of other creatives — including Jari Jones and Dilone — to front their latest campaign, shot and directed by Ukrainian twins Tanya and Zhenya Posternak.

"When I got the request, I was like, 'Yes, period, I'm doing it,' and it all just kind of accelerated, and suddenly I was on set," Hill tells PAPER. The outfits were so cute, I was shook. Everything was great, the bags were everything, and also the whole set environment was so beautiful."

Each campaign star represents a different color palette from Mansur Gavriel's Fall 2020 collection. Hill can be seen posing in two vibrant outfits: A yellow mohair sweater and trousers, as well as a chic ribbed polo, pleated pants and bag in the brand's signature pastel pink — both worn with complementary mini leather bucket bags.

"The fact that I'm being represented as a Black gay man in America and I'm a part of this space feels great," he says of the campaign's racially and gender-inclusive messaging. "I really hope that this is enough to inspire those who feel voiceless to wake up and do what they want, and whatever they set their minds to and to grow and keep going when faced with adversity."

The Gavriel campaign is the latest fashion venture for Hill, who walked in Christopher John Rogers' Fall 2020 runway show and modeled this year for Christian Cowan and Lil Nas X's capsule collection. When collaborating in the fashion industry, Hill chooses projects based purely on his admiration for a brand's products and designers — and their presence in his life.

"I want to work with people that I love, and brands that I adore, and things that I would actually wear. That's just me. That's how I've always been," says Hill, who tags brands on social media because he uses their products day-to-day. "If I know that it's going to be something where it's one outfit, and then I post something and that's it, then I probably won't do it, even if the money is okay."

Fashion and the arts have been essential creative outlets for Hill. "I just wake up in the morning and I love fashion so much, so I have all this stuff at home that I like to try on," he says. "I'll try on different outfits for fun, just to play around. Sometimes, I'll notebook and journal and draw. It's very simple, in my world, I will say."

This year's pressures to be present online haven't been lost on Hill, who relies on technology as part of his career. "I can have so much FOMO because everyone's doing all these amazing things, and I'm like, 'What am I doing?,'" Hill says of life during COVID. "But then, I have to realize that my journey and whatever I'm doing is not like anyone else's. So, I've been trying to put my phone down this entire time and just live in the moment and just enjoy life while it's here."

He has pretty big goals for himself, too. "I really want to start a fashion label, and it's going to be genderless, and I want to do it right," he says. "I don't want to do it just half-assed; I want to actually take the time, learn about materials. I didn't go to fashion school or anything like that, so it would literally be me learning how to do it myself. But it's definitely how I am; I love to learn things and build new skills."

Hill also wants to expand his presence in other industries, particularly film, television and national politics. "I was on a TV show maybe three or four years ago, I did Broad City, which was great. But I want to do more, but it's hard just being a public figure. I'm only seen as one thing, so I have to learn how to be someone else at this point, but that's a learning curve. I also really want to be President, so I feel like that will happen at some point — I'm very, very sure about it."