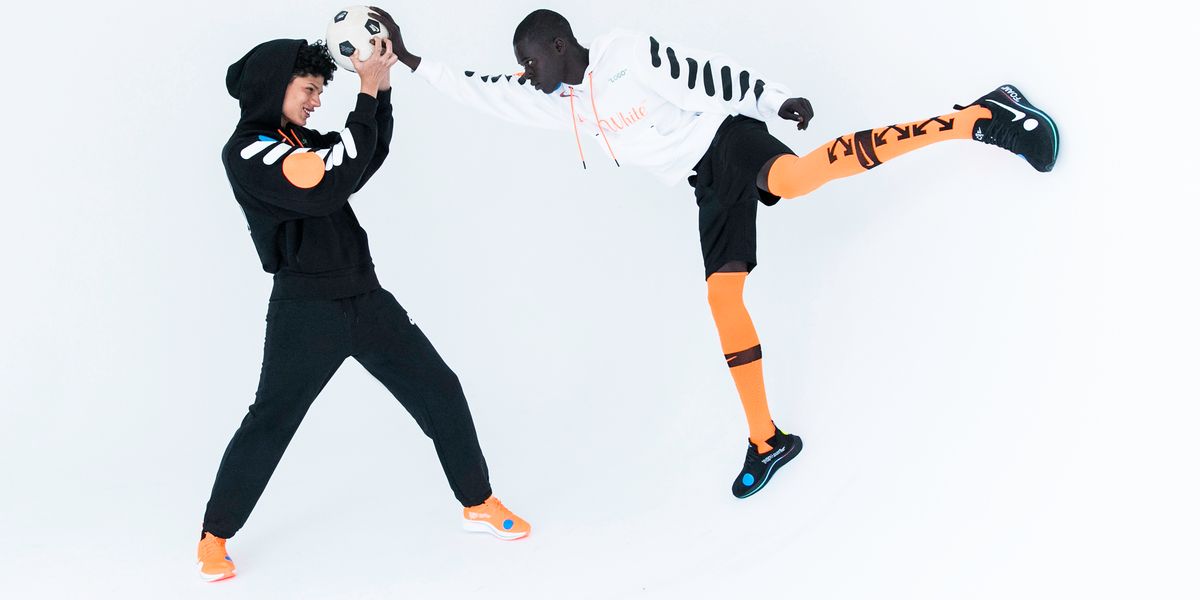 With this year's World Cup around the corner in Russia, Nike has recruited OFF-WHITE designer Virgil Abloh to create an exclusive capsule collection called "Football, Mon Amour." The sportswear looks back on Abloh's own experiences playing the game in school by infusing hip-hop style with classic European football branding and amplifying these details through his smart, subversive OFF-WHITE lens.

Checkerboard jerseys are stamped with Abloh's brand name like it were an official football team, while the word "Logo" in quotes appears throughout as commentary on the history of brand sponsorship in sports. Abloh continues his study of football uniforms with a pattern of dots that shows the best place on a foot to strike the ball. While the capsule is intended for performance, Abloh managed to sneak his clever design sensibility into each individual piece.

PAPER exclusively photographed "Football, Mon Amour," which hits stores June 14th, and asked Abloh himself to explain a bit more about the intentions behind this timely collaboration.

You're known for bringing a very specific perspective to the brands you collaborate with. How do you feel you've done that for Nike?

I think both Nike and I brought greatness to each other by updating classics and making them fun again, while also talking to all audiences. I was able to work on projects and capsules with Nike utilizing its history and telling a story by highlighting a design detail and innovation within each of the projects. What's interesting is the scope of the project — it's a hallmark, a very important idea of post-modern culture, innovation and athletic performance all intertwined into one.

What were some of your early memories playing football?

I enjoy football, both playing and watching. I played from a young age. It's a part of my heritage. My parents are from Ghana and I was introduced to football at a young age. Watching my dad was my first experience with football I would say.

Throughout your work, you've explored very literal (but self-aware) design details, and you've done that again with the juggling dots. Tell me about this, and where else these literal design notes appear throughout the collection.

The basic idea was to be inspired by the game of football and the aesthetic of the clothes, and to create something that could work in a lifestyle capacity on the street and in a performance capacity on the pitch. You can see in some of the details how much the collection is actually rooted in performance, from the fabrication to the state of the art technology that the football team at Nike has done so much testing and research with. That was a major premise: using each of our full capabilities to create lifestyle-driven clothing that was also true to the game of football. It's been an overarching through-line in each of my projects with Nike to build an identity in lifestyle that is authentic to sport.

In particular, there are several meanings and unique design features highlighted in this collection. For example, you can see that in the crest on the jersey and bird motif on the jacket. A lot of the silhouettes came from either past or current shapes. Football has a beautiful history of uniforms and the way that players like to wear their clothes has changed a lot of over time. I was thinking about that while making this collection. For one thing, football is played all over the world, so it has one of the most globally influenced aesthetics. But at the same time, it also has uniquely personal elements that form the whole. I was always inspired by the European teams that had their sponsors placed over their chest; it became sort of its own graphic language. When I was working on this collection, I made sure to celebrate that by incorporating different variants of typography and numbers to give the collection a feeling of something you may have seen in the past.

There's been a lot of secrecy surrounding this collection. Do you think mystery and hype is vital to your success? Is it vital to success for contemporary fashion in general?

Yes! Mystery and hype are vital, but I think inclusion and something people can relate to is what's successful in this day and age. Consumers like myself want to purchase products that not only speak to them, but they can relate to.