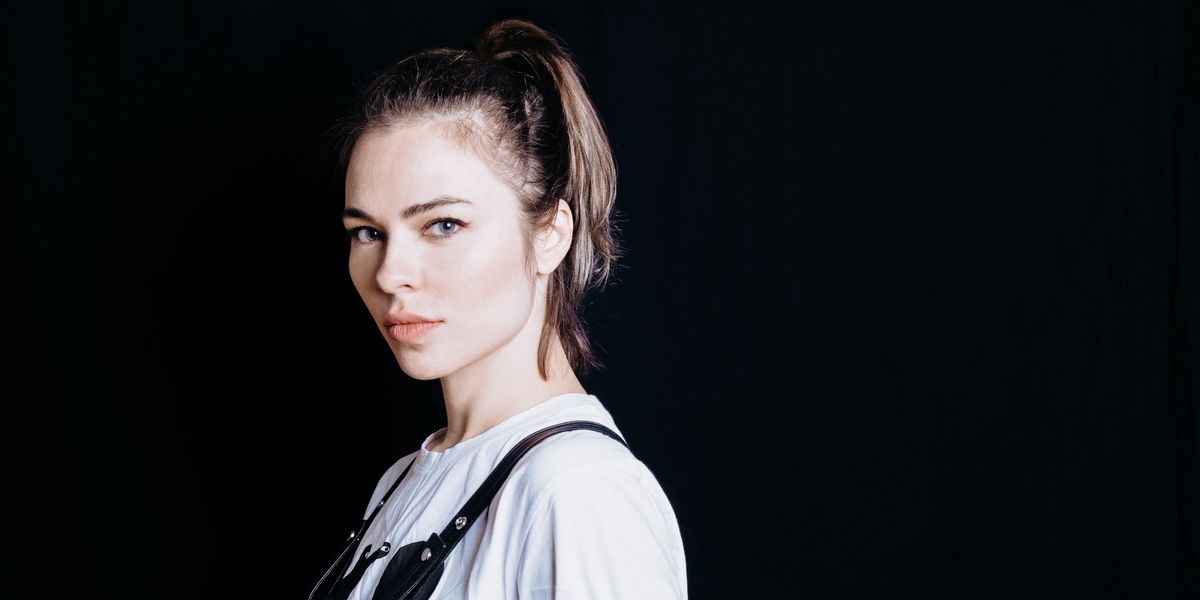 Amidst the fervor over headliners like Childish Gambino, buzzworthy debuts like BLACKPINK, and the general chaos that is the first day of Coachella it would be understandable if you happened to miss the debut of superstar DJ, Nina Kraviz's, live set. Tucked under the hangar-like canopy of the Mojave tent, Kraviz had recreated the layout of her Russian apartment on stage, complete with a massive leather sofa, full-length mirror, and a fully set kitchen table. Behind her, clips of Kraviz dancing and rolling around her actual living room played as she mirrored the movement on stage, occasionally diverting from the introverted and strangely seductive choreography to speak or sing a line into a mic while staring down a crowd of curious interlopers and befuddled stragglers.

Kraviz's set was a radical shift in energy for a stage that had already seen acts like Tierra Whack, Rosalia, and SOPHIE grace it earlier in the day. It was a show that felt intimate, with subtle nuance to each deliberate musical shift. It was a set that felt like it would have been more at home within the walls of an art gallery or DIY warehouse venue rather than headlining a stage at one of the world's most popular mainstream music festivals. It was a surprising and refreshingly unexpected move from an artist whose bread and butter consists of headlining massive techno festivals, holding down the dancefloor at some of the world's chicest clubs, and rubbing elbows with the likes of Virgil Abloh, but not entirely out of character as well.

For the rest of the weekend, I found myself asking people if they had seen Kraviz's set and if so, what did they make of it? Regardless of whether they liked it or not, those who did catch even a small portion of the performance had to admit that it was memorable. The fact that Kraviz's live show had lingered in my mind well after everyone had packed their bags and left Indio was incredibly telling. Something remarkable had taken place on that stage.

Fast forward to this week with the release of Kraviz's latest offering, Stranno Stranno Nebtjano, an EP full of intimate, introverted techno rollers held together by Nina's enigmatically sultry vocals. All three tracks were initially premiered as a part of the live show back in March, making it the perfect opportunity to revisit the landmark performance. We caught up with Nina Kraviz ahead of the PAPER premiere of her Coachella live set to try to better understand and demystify the show that had everyone talking.

What was the idea behind the live show you premiered at Coachella?

We recreated my apartment on stage and pre-filmed a few scenes in the forest and other locations aiming to show the artist's (mine) every day life. The show is like an essence from my everyday life, with evening walks and ever changing moods. We created this show with "Sila Sveta" team and in collaboration with Artem Nanushyan. Additionally, I was honored to have Wally Badarou as a special guest in the end of my show. We've been working on some music together as well.

How did you go about putting together the live show?

I took a few months off. Wrote new music for the show and worked with a team of people to connect it to the visual side of the performance.

How do you feel it was received?

The reaction was volcanic and opinions were remarkably polarized. Some were shocked, some thrilled, some people hated the show and me so much that they felt like they had to come on my socials and insult me. Most of the commenters based their opinion about my hour-long show on 3 minute clips. Interestingly enough people were very surprised that I was singing live, even though I have been making music for a long time and on nearly all of it I am singing. All that said, there were also people who absolutely loved it for what it was and many people connected to me in a new way after seeing this show. For that I cherish this experience a lot and I'm grateful to have been given the opportunity to perform something new.

How did the live show then carry over into the visual for "I want you"?

"I want you" was filmed in the same minimalistic, realistic style as the live-show. We shot it with Artem Nanushyan last year. And next video that I will release from my EP is actually that "carpet scene" that I performed at Coachella. The whole video I'm just moving there slowly looking in the camera. I really love that part of the show!

What was the inspiration behind this latest release?

For about three or four months prior to the release there were some interesting vibes coming into my life. It suddenly felt different and it felt exciting. It was something I just captured on this record.

The three tracks all feel very intimate in their own way, where was you head at when making them?

You got it right. I recorded "I want you" in my bed thinking about someone really special who didn't call for a while "and every time you don't call for more than a day, I start to worry." The other song "dream machine" is quite wanton too, but it's more abstract.

Where do you want to go from here? What lies on the horizon?

I definitely want to go forward. For the second part: this is the question that only God knows the answer for.