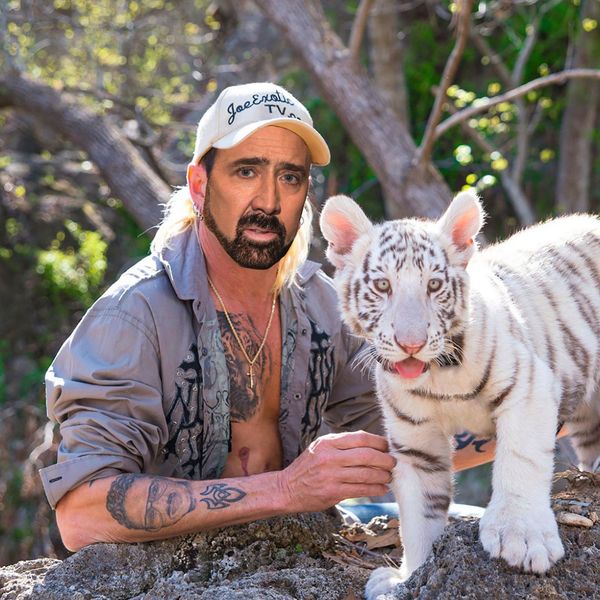 As if God himself — or a casting director — has been waiting to make my innermost pop culture needs come true, today it was announced exclusively by Variety that action film star and meme alumnus Nicolas Cage would be gracing our television screens in a new scripted series as the one and only gay tiger wrangler, Joe Exotic.

Film and television deals based on the life of Joe Schreibvogel, AKA Joe Exotic, have been happening left and right since the massive success of Netflix's Tiger King limited docuseries, which centered around the eccentric Oklahoma zookeeper's demise. Despite the rather grim subject matter of the show — from hired hitmen and mysterious deaths to drug abuse and illegal exotic animal trading — the series' lead characters have developed somewhat of a cult following since its release. With song parodies, podcast appearances and newfound social media followings in tow for the cast, spinoffs were bound to happen. Now, everyone's favorite Declaration of Independence hunter is joining in the fanfare.

Cage is joining the cast of an eight-episode scripted series based on a Texas Monthly article about Joe Exotic's life titled "Joe Exotic: A Dark Journey Into the World of a Man Gone Wild," by Leif Reigstad, and is set to play the lead character. Not only is this Cage's first-ever television role, which is hard to believe considering his lengthy career, but he'll also be executive producing the series via Saturn Films.

While the announcement only speaks to the casting of the new series, the show will allegedly go to the market via CBS Television Studios and Imagine Television Studios in the coming days. It's worth noting, however, that this is a second and separate series to the scripted series starring Kate McKinnon as Carole Baskin. Unfortunately, that means we won't get to see the Saturday Night Live star become Cage's nemesis. The power that would have had, though... far too much.