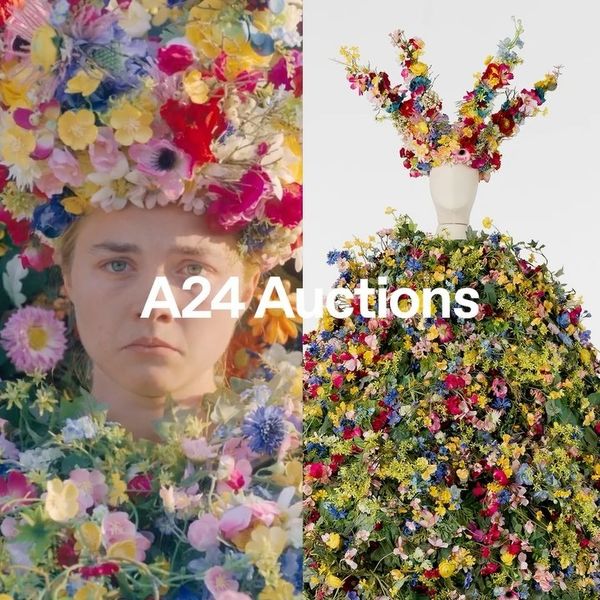 Someone Had $65K to Spend on the 'Midsommar' Dress

by Marissa Matozzo
Paper Magazine
14 May 2020

Last month, independent film company, A24 announced that it would be auctioning off props and costumes from many of its iconic films, including Midsommar, Eighth Grade, Uncut Gems, The Lighthouse, Hereditary, Mid90s and beloved show Euphoria to raise money for New York City healthcare workers and families affected by COVID-19. Last night, the second round of the online auction took place, with buyers purchasing notable items from these sets.

The floral dress made famous by Florence Pugh in the concluding scene of Ari Aster's Midsommar has been sold for a whopping $65,000. The traditional "May Queen" dress weighs 33 pounds and was made from 900-year-old Hungarian linen, making it truly one of a kind. The matching flower crown was sold for $15,000 and the $4,750 bear headdress worn by Jack Reynor was also purchased.

Other Midsommar goodies included in the auction were the climatic smashing mallet, the Ättestupa tunics (cue the terrifying cliff jump scene) and floral vests worn by villagers in the film.

Last week, the first round of the online auction took place, with buyers grabbing the $8,000 hoodie worn by Zendaya in Euphoria. That price was matched for the hand-stitched doormat as seen in Hereditary, which belonged to Toni Collette's character.

If you're a fan of Robert Pattinson and Willem Dafoe's The Lighthouse or Adam Sandler's Uncut Gems, have no fear. Props from these sets are still available, and proceeds will benefit the FDNY Foundation, Food Bank For NYC, Queens Community House and other charities.

Grab the light from The Lighthouse itself, the mermaid carving or wake's pipe while you're at it, or the literal gems from Uncut Gems and Celtics jersey while you still can. The auction closes on May 30 at 3 PM EST.

For more information, visit the A24 Auctions website here.