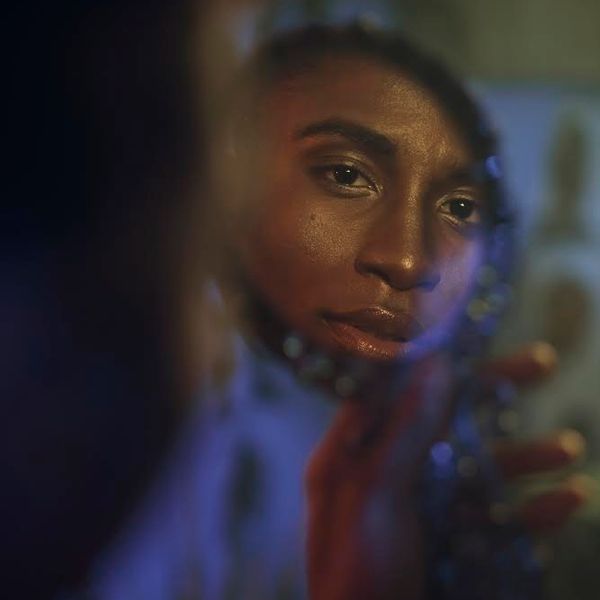 At different points of our lives, for varying reasons, we've all experienced what it's like to be "the other."

Now, zoom in on the experiences of how "the other" occupies spaces designated for the majority. A little closer, now: focus on maybe what it would be like to be, say, a visible, openly queer Black person, on the street walking past, say a group of straight male construction workers. Then, let's say that same openly queer Black person on the street enters a barbershop, an environment typically defined by yes, its multi-generational ability to hold healing, storytelling, and community at its core, but also, a type of masculine currency. What is that experience like for the person sitting in the barber's chair? Do they get dirty looks right away because they don't seem to fit in, based on appearances alone? Do they feel a need to adopt masculine posturing? Do they feel paranoid about straight men, specifically straight men of color, watching, or worse, policing their every move?

Enter 23-year-old Minneapolis-based filmmaker Michael Jemison, whose latest work Buzzed, cunningly explores the nuances of all of the above via a barbershop. Jemison made the five-minute film with his partner John Mark, who acted as co-director and choreographed the film's dream sequence. Together, they craft a piece of art that deftly blends reality and fantasy, color and light: the reality of what it's like to be a queer Black person occupying a space traditionally reserved for (or dominated by) straight men; the fantasy of a world in which queer Black people dare to envision the barbershop of their dreams, complete with color, fierce movement, and royalty, best embodied in Buzzed by Andrea Jenkins, the transgender activist and Minneapolis city councilwoman who made history last year as the nation's first openly Black trans woman elected for public office.

PAPER premieres Buzzed, and we chat with Jemison about toxic masculinity, using micro experiences to encourage greater empathy, and the regal starring turn of artist and politician Andrea Jenkins. Read on.

I understand the experience you're conveying in Buzzed: it's a very micro experience about how Black queer people have to navigate spaces inhabited or dominated by straight men. The barbershop, on the street, in boardroom meetings, there are so many ways people have to do what they must to avoid potential mistreatment and abuse. What do you hope people learn on a more macro level about a more micro experience?

It's a lot. In the first part of the film, the reality world, I was very intentional about not demonizing straight Black men in the barbershop because it is a healing space and is known for a place where people foster community. I think that's a beautiful thing. But I really want people to know that there's another layer for queer Black men and for Black women. I think that their stories need to be heard within these places that others might think are safe. So I hope that this piece makes people think, Oh, I never would've thought this is how a queer Black man or a queer Black woman might feel. I want to inspire greater empathy about these particular experiences [queer people of color navigate], in all spaces, even if you're a queer or straight white person.

What was your impetus for wanting to set this story in a barbershop in particular?

It goes back to being a kid. I remember plotting with my sister about how one day I'd make a gay barbershop. I've always wanted to tackle it, but as a kid, I didn't know how. I wanted to approach it from a lens that wasn't too big or too small. One day I was in the barbershop, I started daydreaming and that's how my concept for Buzzed was born. I've always loved focusing on Black dreams and the power our imagination. Imagination and the ability to dream is a key to our freedom. It unleashes us, and gets us to think about the things in our dreamworld that we can make reality. We fight for change, but what does the dream of change look like? If I ran the world, and built the dream barbershop from the ground-up, it would be super queer and colorful, with flowers and showing Black men being gentle and loving each other; being more inclusive of trans women.

The film doesn't shy away from the paranoia of the experience of entering a space with straight men as a queer person. Unless you are moving in the world as a queer Black person, it's challenging to describe exactly how that feels. In Buzzed, when the narrator looks into the mirror, they see themselves as they are, and they also see the future that they want. The blurring of fantasy and reality is inherent to the Black queer experience. Do you think that impacts how we move through the world? How does the barbershop capture this?

I think that going to the barbershop is one experience that can be really internal for Black queer people. When we go into those spaces, we begin to think about what it means for us to be there in the first place. It takes us to another world in our minds. We don't always have the language for this in the moment. Whenever I step into those spaces, especially if I'm feeling a lot of discomfort, I think of how I'd want it to be. With the barbershop, I was able to lock in and hold in that vision, and keep it with me.

How did Andrea Jenkins get involved? She's so regal in the film.

You're right! So, we go way back. After Andrea got onto the council, I interviewed her for a podcast. She's an artist, and I was asking her if she'd stop making art to focus on politics. She said, I really want to continue working and making art. She was fearful that people would only see her as a politician after being elected. She was very adamant about wanting to work. As I put together Buzzed, I wanted to be more mindful of other narratives besides the one I had in mind. If I'm talking about queer issues, I wanted it to be as inclusive of all experiences under that umbrella as I could be within this story, including trans, gay, and bi people felt important to do. I asked Andrea and she was so down, and so friendly and fun on set. She vibrates high! We gave her almost no direction. She gave us what she got, and stepped into the role so well.

What's some feedback you've been getting in showing this to people you love and trust?

We had an opening premiere not too long ago. I'd only shown five people up until that point, so it was 130 people watching it now. I started to doubt and think, am I the only one with this experience? Maybe it's just me. I can't tell you the amount of queer Black boys and Black women who walked up to me and said, "That's exactly how I feel." Someone texted me and said, "I talked to my barber about this piece." Another friend of mine out of the country said he's navigated similar experiences. That made me feel like maybe I was speaking to something bigger than me, more universal. I don't want the conversation to be traumatic. It's been so affirming, and has brought so much healing to me. I hope it brings healing to other people