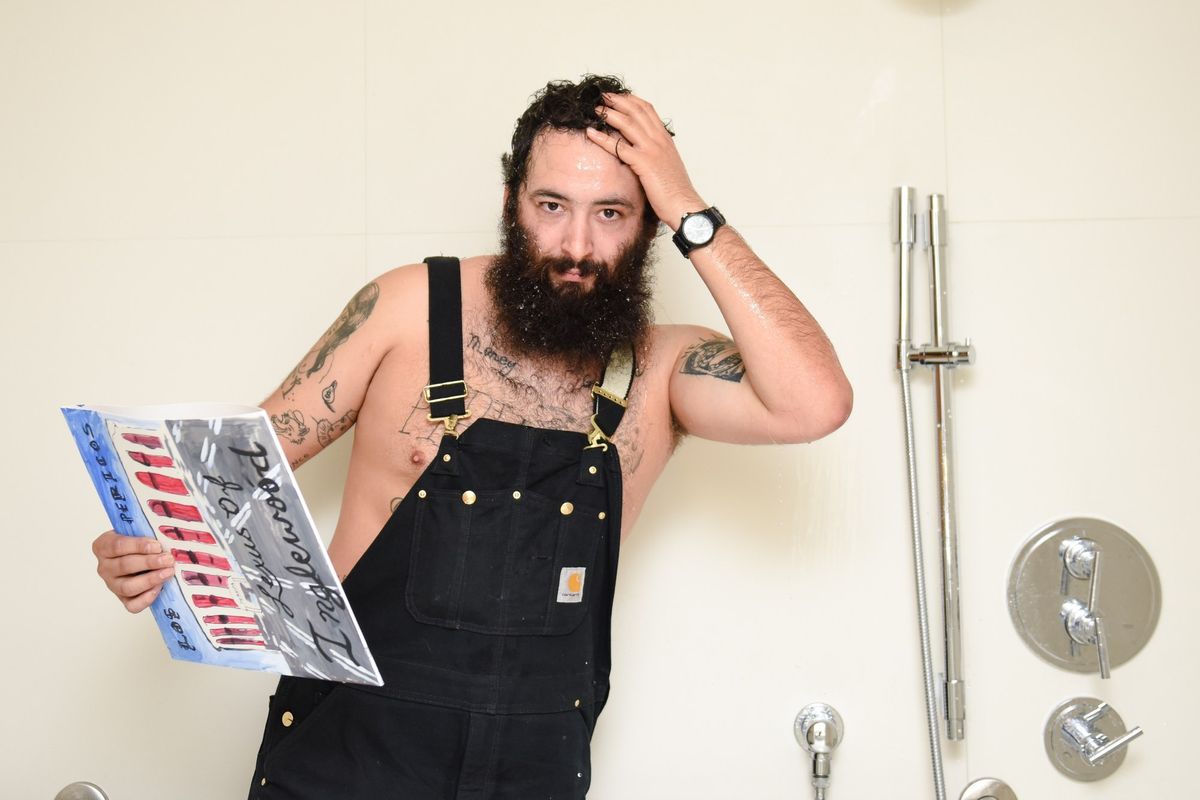 After some apprehension, even us East Coasters can admit that the Los Angeles art scene is on the rise, bringing a steady flow of fresh talent who have the style (and the chill Cali vibes) that the art world has been craving. But Inglewood, an industrial neighborhood in southwest LA home to mostly car repair shops and warehouses, won't pop up on any hip neighborhood map or art gallery guide. The painter and musician Alex Becerra, however, is putting the neighborhood on the map – living, painting and recording with his band Los Tres Pericos in the 1,700-square-foot storefront space that he's ironically named Lexus of Inglewood. "It's rough. It's real," Becerra says about the area he's called home--though a new NFL stadium--and the inevitable gentrification--are on the horizon.

Luckily, Becerra's recognition as a young painter is rising faster than his rent. He was on the cover of Modern Painters, said to "paint like a cowboy," and has brought his crude, tactile and refreshingly uninhibited works to shows at Half Gallery, ltd Los Angeles, Chicago's Shane Campbell gallery, and now the LA Printed Matter Art Book Fair. This weekend, February 23 - 26, Half Gallery's booth will sell and display Becerra's limited edition collection of hand painted record covers holding the press of his band's new album, aptly named Lexus of Inglewood.

Both the Los Tres Pericos record and Becerra's painted album covers (originally shown at Art Basel Miami Beach) are influenced by the Inglewood he's made home, sifting the griminess around them into a hypnotic grunge meets experimental funk, with a taste of Cumbia sound inspired by Becerra's family ties in Mexico. We talked to the LA trailblazer about his unique painting process, how to stay sane in the studio in a world full of crazy, and just how the wild West Coast continues to be his main inspiration.

How did you get the name of your studio, Lexus of Inglewood?

I named my studio Lexus of Inglewood as a joke because I went to this auction at the Lexus of Santa Monica, and since there is definitely no Lexus around here I thought it sounded pretty great. It's both the name of the production house where I make my work and the name of the new record, plus it looks great on DIY merch we've been making. We want to rep Inglewood as much as possible.

Though the neighborhood isn't exactly on the map of hip places to see, it seems to be changing pretty drastically. Do you think there will be a Lexus dealership there eventually?

My studio is two blocks away from where the new football stadium is supposed to be. It's going to open in five years and already real estate has shot through the roof, gentrification has started. It could go both ways though, it could be a neighborhood that doesn't accept that gentrification even with a stadium, or it kicks everyone else out. One of the billboards in Inglewood is a quote of the mayor reading "What's different in Inglewood? Everything is different!" And it's true.

Our band was playing once really loud at 3am. It's a semi-industrial neighborhood so you can do that. But we heard this homeless guy beating on the door. We stopped and were like, "What the fuck?" and then we hear him scream: "You're playing the wrong chords!"

It's historically a musical neighborhood. In neighborhoods like Compton, South Central, those places where all the prolific early '90s hip hop came from. It's the hub of music and culture that came out of LA and put parts of LA on the map, but there were no upgrades. This music was coming from parts of LA that no one saw except driving by on the 110 or 105. I love driving on those side streets inside the neighborhood. Life is thriving here. Maybe not in the way you would think but shit is happening.

And does your neighborhood influence your music or your painting?

Totally. The influences are there right when I leave my door, whether I grew up there or not. It's being down on your fucking luck. This song we have, "Rock Bottom," it's about being rock bottom but it's the best feeling. It's where the energy is coming from. If I had certain luxuries, I think a lot of this production wouldn't happen because it gives me access to this other world. Also, songs my dad would play when I was a kid resonate so much. He's from Michoacan and loves the traditional Cumbia and rancheras like Bronco, Los Bukis and Los Yonics. It's so romantic. Like country music – the struggle, the success.

If you were a fuckin' fly on the wall in my studio and you listened to the records I listen to when I make work, you would get a deeper insight into where a lot of my imagery comes from. But stylistically, there is this thing about early vinyl covers and illustrations that means a lot to me. These one-off paintings on the cover of the records I did for the book fair, they allowed me freedom to get weird. They are images of things that excite me, of things I would want to pick up at a record store. You know, I go to a record store and maybe I don't even know who the band is but whoever it is they obviously let this cover happen and it's fucking wacky so it must be interesting. Sometimes it's bad, sometimes there are jams, but I purely bought it for the image and so much more came from it.

What's your process when you are creating your paintings?

It's quality over quantity, but not in the traditional sense of "more is bad" but the way I produce work in my studio is all derivative of works on paper. It's so much easier working on paper, there is no pressure. It's not as precious as painting. The second I make a mark with paint I'm X amount of money deep into this artwork. I think about it a lot because I don't have a lot of money. Economics do come into play in my studio. I can buy a thousand pieces of paper for $5 and make 500 drawings, and maybe they work, maybe they don't need to be paintings, but sometimes power is in the size. These images, I don't even know where they came from sometimes, they try to become paintings and fall into that discussion of that world. The joy of my works on paper are the ones that can translate into a bigger project as a painting. I mean, just this upcoming show, I used more oil paint that someone would use in their whole career! But that's the pleasure--the feeling of squeezing out paint that costs $300. The reality of economics really comes into play.

I can make things fast but there are works that take years. You know, it sits for months and then suddenly I see it. "BLUE, it needs BLUE!" I don't think time has anything to do with quality but personally I need to feel done with something before I bring it anywhere. It's hard sometimes for young artists, someone might come by and want to buy a painting that isn't finished yet, and they want to pay cash, but sometimes you need to have the balls to say it's not done. Even though i need the cash, it's not done.

You've started to get some eyes on you recently. You were on the cover of Modern Painters and Cultured. How does that affect you?

There are things that are coming out now that seem very rapid, but things have been in the works for a while. I'm new to all of this. Those "Top 10 Artists to Watch" articles, those are, for the most part, usually New York based. So to be featured now as an LA artist is interesting.

I always have to remember to not get jaded from art. I realize I've been traveling the world because of my art, that in itself is amazing and rare. I'm in a very fortunate place. I want to piggyback on the momentum, but I want to do it in a way that is true to myself.

There does seem to be this buzz around the LA art scene that is reaching the East Coast. What do you think is the difference between the two?

Well, LA is so spread out, geographically, in terms of where artists are that even if it is competitive in LA, it differs from New York. Even female artists in New York competing for the handful of grants in New York, it's fucking cut throat, and it makes this animosity among artists just because there is not enough money to support everyone. In LA it's much more sporadic. There is more space in between us, so it feels less competitive. The luxury of being in LA is understanding that you are taking it seriously and who cares if anyone else does. It's in the history of this place, the wildness of artists like Mike Kelley, Paul McCarthy, and all the smaller names in that scene that didn't get the hits but influenced the scene so much. Plus so many Latino artists that maybe haven't gotten the credit they should.

As a Latino artist do you feel your work has shifted with the current state of the US?

For me it hasn't. Shit's crazy and I still can't believe it, but that shit cannot penetrate into my studio. My studio is a creative hub, not for this kind of politics. My attitude hasn't changed, it is more of a question of how can I stay positive in these times. I don't want to think of shit that makes me mad when I make art, especially not politics. I'd rather make art that frustrates me and gives me power in the medium, not frustration from the outside. I'll deal with that when i leave the studio, but in here it's about the work.

Alex Becerra's work will be on display at the LA Art Book Fair February 23 - 26 with Half Gallery.