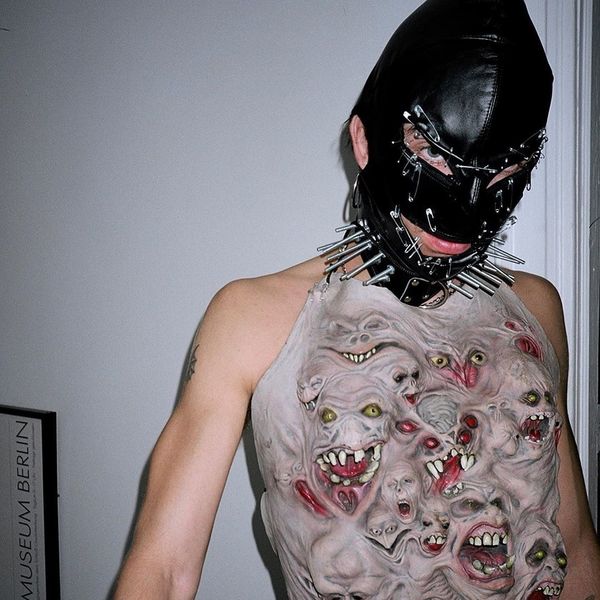 MEATY Would Open the Box to See 'Daddy Pinhead'

MEATY performs live with a leather gimp mask that conceals his identity, covered entirely in safety pins and nails. He raps through pitched down vocals like the devil himself, and grabs his crotch alongside a hype girl in stripper heels, who spends more time taking selfies onstage than actually revving up the audience.

But they don't need forced excitement — the entire thing really works: it's super hot, subverts traditional masculinity with queer feminine twists, and forces you to dance to a blood-covered man that looks more like a serial killer than any regular pop star.

The Los Angeles artist's debut 2019 EP, WORLD MEATY, offers eight tracks all dripping in slow, creepy trap production with titles like "Monster" and "Beware" to underscore his back alley, horror film brand. MEATY more recently dropped a one-off single, "Mary," with sledgehammer beats and the apt description, "We cuttin off the dicks."

So naturally, PAPER asked MEATY — expert in all things psycho, twisted, and proudly fucked — to choose his top 10 favorite horror films throughout the years. Mother (2017) reminds him of "what's going on inside his head;" Megan Fox in Jennifer's Body (2009) gives him a boner; and Sorority Row (2009) paints a picture of all the girls he went to high school with. Most importantly, though, MEATY would open the box to see Pinhead of 1987's Hellraiser.

MEATY will perform live tonight at HEAV3N's Los Angeles Halloween party, co-hosted by PAPER and featuring Noah Cyrus, Alice Glass, and more. RVSP to unlock the secret location, and get into his favorite horror films, below.

My number one movie of all time will always be Raw, and is a huge inspiration for MEATY. If you wanna see a bitch turn the fuck up, then you need to witness this movie. I also understand why one of the characters eats the hot guy's leg off, I would.

American Mary is my spirit animal. She makes me feel a little less crazy about wanting to possibly cut my man's dick off and throw him in my closet.

Martyrs is the first movie that had me turning tf up in my chair. There's a specific scene of this one bitch being found in a dungeon and I've never seen something that looked so similar to my hangovers.

Mother is one of the most beautiful movies ever made and everyone I know disagrees with me. I forced four of my friends to see it all on four different occasions and they still are concerned why I love it so much. I think I connect with it because it reminds me of what's going on inside my head.

If there's one bitch I don't fuck with it's Tiny Tim, and that's why Insidious will always have me fucked up. PERIOD.

I don't think I have to explain this one. All I have to say is Megan Fox, and if that doesn't give you a hard on then idk what will.

If I could marry any human on this planet other than The Rock it would be Rob Zombie. Every time I watch House of 1000 Corpses I genuinely feel sick to my stomach because I wish I made it myself.

The Strangers will always leave me pissed the fuck off. I couldn't imagine almost getting dicked down and then you gotta deal with bitches breaking into your house.

Not only is Pinhead daddy, but Hellraiser will always leave me debating getting body modification to become one of the characters. I would open the box just so I could see daddy Pinhead, tbh.

I love watching this movie because I really believe that this is what girls from my high school are up to in college, and it makes me happy.