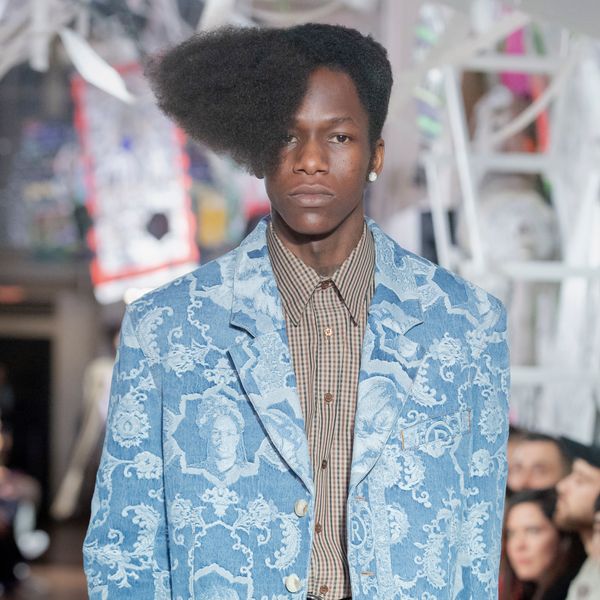 The Models at Martine Rose Fell Asleep with Wet Hair

By the end of the Martine Rose presentation at London Fashion Week Men's shows this year, one thing was certain: Rose loves her brand's home city, uniting various elements of the city and its distinct subcultures within her work.

Staged in the gym hall of her daughter's primary school in Kentish Town, the show had a retrospective feel, looking back at '70s streetwear and youth club culture.

"This is my daughter's school and it's a really great school," Rose told reporters after the show. "I think it's really optimistic, really universal... primary school is a really magical place and I wanted everyone to feel that, to feel really optimistic. Young people and their education, it's really fucking important. It's the future! We need to invest in them and inspire them."

Still, Rose didn't just rely on nostalgia to showcase her creativity. Among the tie-dye jeans, paisley shirts, and skater style tees, was an experimental take on big volume hair. While some models sported the ultra frizzy style in all its glory, others had hair swept to one side of their face giving the appearance of a freshly taken nap.

The punk rock aesthetic, created by hair stylist Gary Gill, and was balanced with fairly simple and minimalist makeup. Then there were the brows which — in stepping away from the thick and bushy brows that have otherwise dominated the runways as of late — were pared down (and often shaved to a small section) to match fresh, dewy skin.

Finishing this lineup of inspired looks was a surreal backdrop paying homage to both the cultural landscape of London and Rose's own shows.