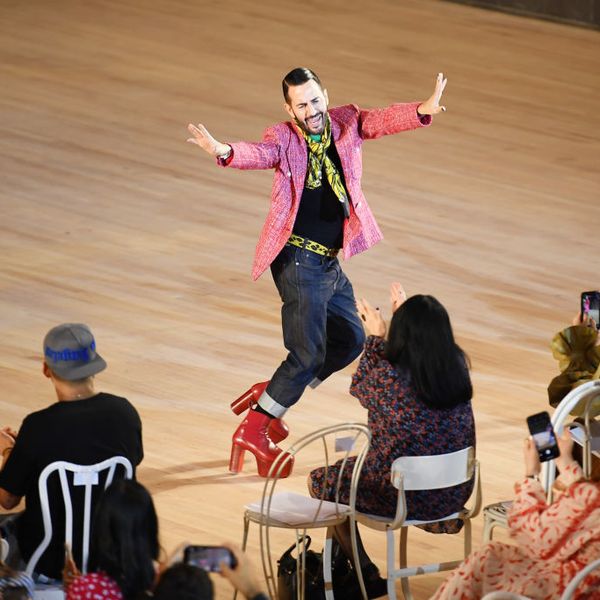 Marc Jacobs scurried and leapt across the vast Park Avenue Armory show space at the finale of his Spring 2020 show in a pair of platform high-heeled boots, a fitting end to a season that was predominantly about optimism and high-spirits. Jacobs encapsulated that mood with an eclectic collection that showed off a medley of his signatures: extravagant volume, floor-length floral dresses, and giant headpieces. The premise for his designs is simple — the joy of dressing up, one's pure love for fashion — and this collection was no exception.

This show, which was held on the 18th anniversary of September 11, included show notes on every seat featuring an excerpt written by Christopher Barnard from an old PAPER review of a Marc Jacobs fashion show that took place right before 9/11:

"On the Monday evening before 9/11, Marc Jacobs showed a star-studded fashion show at Pier 54, with the towers glistening but a few hundred yards away, glamorous, celebrity-packed and incidentally poignant (the direction was a '70s flower child) ... seen in context as a tragically dazzling snapshot of life in New York before the world changed next morning."

Here's everything else to know about the collection.

A trio of models sported giant minidresses in floral, ruffled, and neon green versions. The exaggerated shapes were balanced out by pairs of colorful knit tights.

The "genius of Karl" served as one of Jacobs' eclectic references this season, notable in his take on the classic tweed jackets and pants. His suits, however, we more let's go disco than let's go to lunch.

Milliner Stephen Jones, a longtime collaborator of Jacobs, provided the plethora of headpieces for models to wear. A variety of styles, including western cowboy hats, extravagant fascinators and wide-brimmed sun hats added to the maximalist mood of the collection.

Some floor-length, A-line frocks veered very much towards Little Girl on the Prairie, with dainty florals and panels giving a bohemian, romantic vibe.